Pamela Gibson is the oldest surviving person to have worked at Bletchley Park decoding centre during the Second World war. ‘But Bletchley was not my whole life,’ she says in her strong, velvety voice. ‘I’ve had other careers too.’ She also holds the world record for the longest ‘rest’ between jobs as an actor, proving that it’s quite possible to restart a career after 60 years. 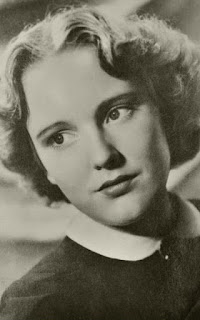 Pamela was born in her grandmother’s drawing room in Knightsbridge in 1917, during a zeppelin raid. ‘I was almost called Zeppelina,’ she told me. Her favourite subjects at boarding school were elocution and horse-riding. ‘When the hunt came past, we all dropped our books and followed.’ Her father had been an opera singer and when she left school he sent her to Paris. There she was taught French by Yvette Guilbert, the Moulin Rouge singer portrayed by Toulouse Lautrec. After a few months improving her German in Munich, she attended the Webber Douglas Drama School. One of her first professional parts was opposite Cyril Cusack in The Playboy of the Western World. Then she went into rep; and when war broke out, into ENSA.
‘In 1941 an interfering godmother told me I was wasted on the stage and there was interesting work to be done if I applied to the Admiralty.’ Pamela was interviewed, and offered a secret job. ‘I was torn because my brother Patrick had just been captured in Libya, and was missing, so I wanted to be useful. But on the other hand, I had just been offered my first part in the West End, which was rather thrilling. I asked the man at the Admiralty who’d interviewed me, what he thought. “The stage can wait, but the war can’t,” said the man.’ So she accepted.
‘I thought it would be exciting and I’d be dropped into France as a spy. But I was sent to this big cold house called Bletchley. I suppose I was recruited because of my well to-do background. They thought that if they took in girls from families they knew something about, they were less likely to be German spies. I was very disappointed when I learned that my job was copying words onto index cards. The codes came in broken up and then we had to cross-reference them. There was a separate card for each battle ship, another for the port it was leaving, another for where it was arriving. Some days it was incredibly exciting but mostly it was quite dull, with messages about onions or something.’ Having lived on her own since she left school six years earlier, Pamela refused to live in a stuffy billet or share a room, so she rented a caravan in a field. By 1944 three quarters of the 9,000 workers at Bletchley Park were women. They were paid half what the men were, and only given temporary contracts. Pamela must have been outstanding as she was one of the few women who was promoted. As Head of the Index, she was in charge of 50 women in Naval Intelligence. ‘I was only promoted because I couldn’t type and at 24 I was quite old,’ she says modestly. ‘Although I was pretty fluent in German and French.’
The tedium of long shifts was balanced with amateur dramatics, much improved by professional actors such as Pamela, and scripts written by Oxbridge graduates, such as the charming and gifted Wing Commander Jim Rose. ‘The best thing about Bletchley, was meeting Jim.’ At 32, Rose was considered too old to fly, so was put in charge of Air Intelligence at Bletchley Park. He had to decide which de-coded messages to hold back from the Air Force in case their actions then revealed to the Germans that Britain had broken the codes. On their first date, Jim took Pamela to dine at the Savoy. ‘It was very difficult to get a table, so he posed as an Irish peer whom he knew was not in London. Later we discovered that one of his friends had done the same thing, at the same place.’
They were married in 1946, a perfect match: both were cultured, generous and keen to make the post-war world a better place. They moved into a bomb-damaged square in Kensington, a few doors down from my family. When I was born, my parents asked Pamela to be my godmother. She was an unusually thoughtful one: my christening present included not only a silver mug (battered but still loved) but also a Swiss nanny for six months. Apparently Sister Klarli looked after not just me, but also my parents and my three older siblings; and was there for the arrival of my younger sister. Instead of toys for birthdays, Pamela paid for my piano lessons – a present that goes on giving. After the Roses children, Alan and Harriet, arrived, they moved to Zurich where Jim Rose was founder-director of the International Press Institute, an important global force for the freedom of the press.
For ten years after their return to London, Pamela was the school counsellor of North Paddington Comprehensive, caring for pupils who had recently arrived from the Caribbean. When she was 60 she had to retire, but didn’t give up. ‘I had to do something, so I became the vice-chair of the NSPCC,’ she said as if it was as simple as buying the weekly fish. After Jim died in 1999, Pamela, then aged 84, went back to her first career and renewed her membership of Equity, the actor's union. A few acting lessons later, she was cast as Lady Jedburgh in Lady Windermere’s Fan, directed by Peter Hall at the Haymarket Theatre. She also understudied for Googie Withers, then just 83. After only three nights, Googie Withers fell ill and Pamela was called upon to play The Duchess of Berwick. With several more parts over the next five years, she has maintained her position as the actor with the longest period of ‘resting’ between jobs. ‘It was wonderful to get back on the stage after 60 years. Acting helped me get over losing Jim. The fear of going on stage is the best defence against grief.’

Churchill described Bletchley Park as ‘the goose that laid the golden egg but never cackled’. Everyone there had signed the Official Secrets Act and until recently Pamela never spoke of her war-time career. Not even that she had known the computer scientist Alan Turing, though she insists not well. ‘He was polite and intelligent, but he really preferred the company of men.’ Even when the film Enigma about Bletchley Park was released in 2001, she only commented to a few friends, ‘We never wore hats like that.’ When The Imitation Game, starring Benedict Cumberbatch as Alan Turing, came out in 2014 she changed her mind. ‘I realised that everyone else was talking about it, so why shouldn’t I?’ she told me. Suddenly she was in the limelight with appearances in books and on television, and even Desert Island Discs. ‘But we don’t need to be glorified. We were all well protected and properly fed.’ Pamela will be 100 years young in November and remains as beautiful and chic as ever. She still entertains friends and grandchildren in the elegant Georgian house in Kensington that has changed little since she moved there 71 years ago. ‘I’ve had a lucky life,’ she says. Nonsense, I’d say it wasn’t luck, but resilience, determination and chutzpah.
www.janiehampton.co.uk
Posted by Janie Hampton at 00:30

What a woman! Janie you really bring her to life. I love the stories of these phenomenal people who think they were 'just doing their bit'.

Fascinating - what a wonderful woman!

She sounds like an amazing person, and what a fascinating and varied life she has lived (so far!)

Just heard her on the radio. What a wonderful woman and an interesting life.