Sadayakko in London by Lesley Downer

On Tuesday May 8th 1900 a group of Japanese travellers sailed into Liverpool and that afternoon stepped through the great Doric arch out of Euston Station in London. They’d been on the road for over a year and had performed in theatres across America, from San Francisco to New York.

They were the first professional Japanese theatre troupe ever to visit the west and the first to visit England. The Japanese actors whom W S Gilbert had seen in the Knightsbridge Village, who famously inspired The Mikado, had been travelling players, not professional actors.

This was the era of the great actresses - ‘The Divine Sarah’ (Sarah Bernhardt), Ellen Terry, Gabrielle Réjane and Eleanora Duse. But the Japanese troupe had a diva of their own, who had already thrilled audiences across the United States: the beautiful Sadayakko, an exquisite dancer, actress and musician and until recently the most celebrated geisha in Japan. 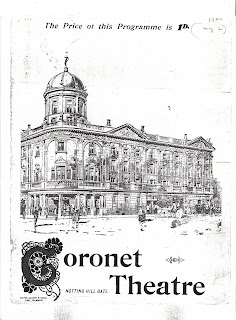 London was the capital of the richest, most powerful nation on earth and the hub of its vast empire. The real test was to make their mark there. Despite their success they were hovering on the verge of bankruptcy. In Boston they had met the great actor Henry Irving and he had given them letters of introduction but it was still two weeks before they could put on their first performance, during which time they had no income. To make matters worse they had to keep up the illusion of being rich celebrities and ran up debts at an alarming rate.

They finally opened at the Coronet Theatre in Notting Hill, a distant rather slummy suburb of London, on May 22 1900. Londoners had never seen anything like the colourful, almost wordless dramas they showed, with athletic swordplay, jujitsu-like fights, humour, split second costume changes, gorgeous scenery and above all Sadayakko’s ethereal beauty, mesmerising dancing and shattering death scene. To put together their plays, they had taken sections of kabuki dramas which in Japan began at dawn and went on till nightfall and cut them to thirty minutes and cut out nearly all the Japanese dialogue which was incomprehensible to their audience. They issued an English language synopsis so the audience would know what was going on.

At first the plays were just too outlandish for the supercilious London critics. Of the Japanese music - the plink plink of the shamisen, a kind of banjo, and the wailing singing - one critic wrote, ‘No words could do justice to its horrors, besides which the efforts at cacophony of the domestic pussy cat on the roof are paltry.’

At the time Japonisme was at its height. The rich and fashionable collected woodblock prints, blue and white porcelain and netsuke, so they were prepared to appreciate the aesthetic nature of Japanese culture. ‘In fact, the whole of Japan is a pure invention,’ Oscar Wilde had written in 1889. ‘There is no such country, there is no such people. The Japanese people are simply a mode of style, an exquisite fancy of art.’

Soon Sadayakko’s beauty, exquisite dancing and heart-felt acting had captured their imaginations. ‘Sada Yacco is certainly one of the most enchanting ladies at present appearing on the London stage,’ The Morning Post enthused.

The Welsh symbolist poet and theatre critic, Arthur Symons, was stunned by her death scene in The Geisha and the Knight. It was unthinkable even to compare the new Japanese arrival with the all-conquering Sarah Bernhardt. But Symons went further. ‘It is death as not even Sarah Bernhardt has shown us death,’ he wrote.

The troupe was so successful and so celebrated that they were invited to perform before Edward, Prince of Wales, at the home of the Bischoffsheim banking dynasty in Mayfair on Wednesday June 27th.

Sadayakko remembered that the Prince of Wales greeted her and said to her through an interpreter, ‘I’m very happy to have been able to see this oriental art from such a distant land. This is thanks to you. What a long journey you have had!’ - a comment irresistibly reminiscent of our own dear monarch’s enquiries as to whether one has come far. Maybe it’s in the instruction book for royalty to mention the distance one’s petitioners have come.

Sadayakko later recorded her opinion of the British. Having enjoyed the company of the outgoing Americans, she found the British in contrast ‘haughty and unsociable.’ On the positive side there was plenty of whisky and even ladies drank and smoked quite openly in public. She also noticed - as an excellent horsewoman herself - that British women were ‘very good at horse riding.’

The day after performing for the Prince of Wales the troupe left for Paris, where the 1900 Paris Expo was in full swing. Under a new manageress, the American dancer Loie Fuller, their performances proved a sensation. Rodin begged to sculpt her (she was too busy) and André Gide declared her ‘as great as Aeschylus.’ 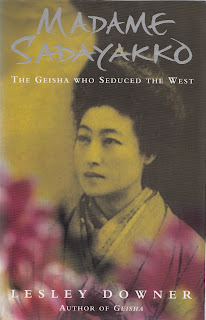 When they returned to London for a second visit in 1901, it was as superstars. This time they performed at the magnificent Criterion Theatre in Piccadilly Circus, right in the heart of the city.

The wit, essayist and parodist Max Beerbohm mused, ‘What is the secret of Sarah’s appeal to us? Why do our hearts go out to Sada Yacco? Why is Réjane enchanting? If I, Paris-like, were called on to decide which of these three goddesses was most admirable, the apple would (I think) be adjudicated to Sada Yacco.’

More - far more - was to come, including a meeting in Paris with a young artist called Pablo Picasso, who did four paintings of her, dinner with the ill-fated Tsar Nikolai II in St Petersburg, and an encounter in Milan with the composer Giacomo Puccini, who modelled his Madama Butterfly on her. And thus she found immortality of sorts.

Such fascinating detail - and why I love the History Girls blog so much...all the background knowledge enriches the reading experience so much. Thank you!