Past Imperfect by Mary Hoffman

Past Imperfect? Selling children's historical fiction to a modern audience

This was the title of a very successful meeting at the Society of Authors in London on 16th March. It was organised by the SoA and Sue Reid of Histeria, a group of writers of historical fiction and non-fiction for children and young adults.

This is my account of the meeting. Sadly, Marketing was not represented, as the result of a last minute cancellation but the experience and skills of this panel were considerable. Kevin, currently the Honorary President of the School Library Association, is a poet, novelist, opera librettist and translator, who has won both the Carnegie Medal and the Guardian Children's Book Award with historical fiction for children.

In his opening remarks on the importance of history and story, Kevin quoted Hilary Mantel: "To live in the present without engaging with the past is like being a dog or a cat, bobbing along on a sea of egotism and ignorance."

to remind us of the importance of vesting story in individual people - a theme which was frequently returned to in the course of the evening.

He then asked each panellist for a short overview of whether historical fiction for children is in crisis. 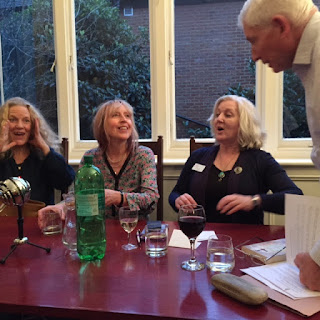 Dawn Finch (DF) began by saying that it was a common belief that it went in and out of fashion in children's publishing but she believed that the kind of child who reads historical fiction is a wider reader anyway. She felt that the teaching of history in schools was focussed on differences whereas fiction took the opposite approach.

Sarah Odedina (SO) was reluctant to consider historical fiction as separate from any other form of great storytelling. She cited Celia Rees's Witch Child, which was successful primarily because of a compelling  central character.

Ruth Logan (RL), who has to sell translation rights, frequently speaks to scouts and has found the popular periods to be the Holocaust, Ancient Greece and Rome, the Slave Trade, the two World Wars, maybe the French Revolution. "But nothing works without a wonderful story."

Kevin Crossley-Holland (K C-H) said we needed to "step into the heads and hearts" of our characters. He wanted to know if we were doing enough ruthlessly to expose children to today's realities. Or were just concentrating on SF and fantasy.

DF thought that in times or Recession and Depression readers want SF and nostalgia.

SO believes that Historical Fiction can allow the author to present a mirror to the world and show political realities in an apparently safe and distant past. It has a role in mediating the present through the past.

RL thought it wasn't just a matter of period: there is a market for the mix of history with a magical or fantastic element. 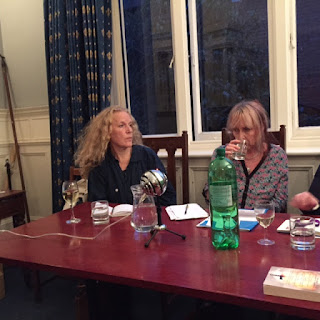 Martin Reed of the Society of Authors asked a question on behalf of a member who could not attend, Ilona Aronovsky. This was about who are the heroes and villains of history, since history is contentious.

K C-H said that recent literature had taken a Marxist view of telling stories "from the bottom up." It began with Bows against the Barons by Geoffrey Trease.

SO thought there was still a problem with telling the stories of certain people and not others. What is "our point of view"?We could do with more experimentation in form.

RL thought it was an exciting time with all kinds of different voices but SO thought there was still a white male bias although it was being challenged. And SO thought the publishing industry was really trying.

DF thought that historians might fear we were diluting history by giving alternative versions but history is not a science. When she grew up everyone "knew" that Tutankhamun was murdered  and that Shakespeare invented Richard the Third's curved spine.

RL says it must open the imagination of the child and SO said it must humanise history.

Rus Madon asked about which historical writing was more accessible for which age range of readers. But SO repeated that historical fiction was no more difficult than any other literature. It all came back to compelling stories. 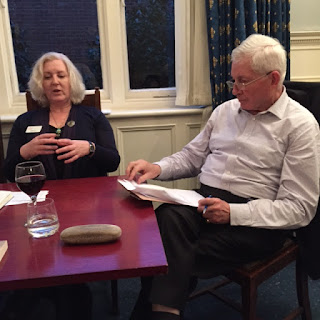 DF referenced the National Curriculum and said that 7-11 year-olds were studying Greeks, Romans and Egyptians and wanted immediacy and glamour - big themes. By eleven they will have studied the 1930s. And RL talked about the importance of the book's jacket. DF agreed and said it was the whole package - after all "who goes into a restaurant without reading the menu first?"

K C-H asked how much publishing was curriculum driven and SO said she never thinks about that and didn't even know what was on the curriculum! This was widely welcomed.

DF asked the publishers if fiction set in the Victorian period sold well, mentioning that it hadn't been on the curriculum for many years. And RL said they would mention to Sales Reps if the subject was on the curriculum.

Candy Gourlay mentioned cultural appropriation and asked if it meant she should write only about Philipino characters and situations. SO could sympathise with the position when she received submissions where the author hadn't close experience of the group he was writing about.

RL said it was about opening doors.

This was the night that the Carnegie and Greenaway Medal shortlists were announced and K C-H asked when a historical novel was last shortlisted for the Carnegie Medal but was reminded that Tanya Landman's Buffalo Soldier wasx a recent winner.


RL said we must look at books which transcend the period. Not having an Elizabethan on the cover is a good idea. SO agreed that sales were hard but ALL sales were hard. Far too much is published - fantasy, contemporary and dystopian fiction were all equally hard.

There was a question about when "history" begins - something we have discussed a lot on the History Girls. The usual definition is that  historical fiction must be set at least a generation ago.

SO added that to a ten year old anything that happened twenty years ago is unimaginable.

Lydia Syson asked about the role of school librarians as the greatest champions of historical fiction. DF was the obvious panellist to talk about this and said that no-one read more than a school librarian. She had read forty books this year already. Parents were difficult to persuade to part with £7.99 for a book.

Linda Edwardes-Evans said that unfortunately many teachers did not read themselves and the books they were using with children were not recent. DF gave a shout out to Barrington Stoke's list with a lot of historical fiction in it. Their catalogue would reach teachers. She believed every school needed a "book expert" even if not a librarian.

There was a question about comedy in historical fiction and all the panel agreed we needed more funny books - full stop!

K C-H mentioned we hadn't touched on the influence of TV and series like A Game of Thrones. And RL added films like The Pirates of the Caribbean.

After a brief discussion about poetry, which might be adding another difficult dimension to presenting titles to the Sales teams, K C-H asked us all to nominate favourite recent historical novels.

This followed on from SO's rallying cry that you should publish only the books you felt passionate about.

My choice was Code Name Verity by Elizabeth Wein. Someone chose Here Lies Arthur by Philip Reeve. Following Ophelia by Sophia Bennett was Catherine Johnson's choice and someone else called out Morris Gleitzman's books and Eve Ibbotson's Journey to the River Sea.


Thanks to Celia Rees for swapping posting days with me; Celia will post on 1st April

(Past Imperfect? was the brainchild of Histeria, a group of children’s and YA historical writers - and was a response to the difficulties many writers  find getting their work published now.)

It was a very succesful and informative meeting indeed, Mary. Thanks for sharing.

Mary, thank you so much for such a succinct and accurate account of the meeting. The whole event was very stimulating, but I was totally in awe of the amazing writing talent that attended. You are all 'giants' as far as I am concerned.

Thank you, Mary, for such a clear and precise account. I had to leave early, so I really appreciate your report of the rest of the discussion. Very chuffed that Witch Child got a mention! Excellent and useful discussion that I think we can learn from as writers of historical fiction.

thank you, Mary. That opened my eyes. Love the Hilary Mantel quote.

Thanks Mary - so sorry I couldn't be there, but this is a great summary!

Thanks so much, Mary. As Sue Purkiss says, this is a great summary, and I really appreciated your taking this on for us.

Thank you Mary! I am reading this in distant Los Angeles (sipping an iced lavender chai latte) and really appreciate this account as I couldn't be there–this was the next best thing!

Interesting insights, especially about the relationship with the curriculum. I can't remember ever reading a book especially because it was set in a period that we studied in school. If it looked interesting, I read it! (although I was already a history lover, so maybe I was biased...)

Thanks so much for this, Mary. A really stimulating event - the first of many I hope.

Great evening, and a very useful account, Mary. Thank you so much. x

Enjoyed the discussion from afar! I would say to Sarah O and others who said they don't take into account the history curriculum, that HF is very important in enriching it, and they should. That doesn't mean only publish for the Primary topics, of course. I was part of a vigorous campaign by the Historical Association and very many others, against the beastly proposals by Michael Gove who tried to impose his view of British History minus any compulsory world history whatsoever.(!!!) To cut a long story short, he didn't succeed. As a result, Primary History (not au fait with 2ndary) is improved. Instead of one token world history option lists there are two, with great new topics, a requirement to show links between British and world history, and diversity is still in there, and increasingly recognised as important.

... If you check out the Historical Association website https://www.history.org.uk/ there's plenty of info there. Primary History Journal & loads of other resources support all the KS2 world history topics, (I contribute articles & edited an issue on Diversity in 2013). (Ancient is one list, Shang China, Indus Valley, Sumer... early modern is the other, so Islam Civilisation- Baghdad, The Maya, Benin...) Hopefully it means children will learn more about the world than Ancient Egypt. British 'Stone Age' is newly in. True Victorians and 1930's are out, which means not compulsory, not that they are not taught. They can be brought into the local history requirement with other periods. Schools need not choose examples given for the topics, either. (You need to join the Histassoc to access the resources, or pay to download. Joining is well worth it. Here endeth the Join the HA blurb.