I’ve been reading Edward Lear’s wonderful nonsense poems to my little grandsons and have just noticed that there is a plaque to him near where I live. The site is now a seedy mews off the Holloway Road in north London but when he was born in 1812, the youngest to survive of twenty-one children, it was a middle class family house in the village on Holloway, near Highgate.

When Lear was four his father, Jeremiah Lear, a stockbroker, was imprisoned in the King’s Bench for debt. The family was scattered and Edward's eldest sister, Ann, who was twenty years older than him, looked after him. They lived together until she died, when Edward was almost fifty. Lear was a delicate child and an epileptic, at a time when the illness was considered shameful. He referred to it as “the Demon” and throughout his life he also suffered from acute bouts of depression. He had very little formal education and later wrote, “I am always thanking God that I was never educated;” in spite of this he taught himself six languages and became an accomplished composer as well as a poet and artist. He played the accordion, flute, guitar and  piano.

As he and his sister had no money he had to earn his own living from an early age: “ I began to draw for bread and cheese about 1827, but only did uncommon queer shop-sketches – selling them for prices varying from ninepence to four shillings.” Audubon’s great work, The Birds of North America, was first published in the 1820s and started a fashion for big, lavishly illustrated books about exotic birds and plants. In his late teens Lear visited the Zoological Gardens to study parrots:

"...for the last 12 months I have so moved – thought – looked at, – & existed among Parrots – that should any transmigration take place at my decease I am sure my soul would be very uncomfortable in anything but one of the Psittacidae.”

The Psittacidae (1832) established Lear as a celebrated illustrator. In 1846 the young Queen Victoria invited him to Osborne to teach her drawing. 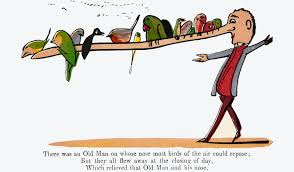 In 1846 Lear published A Book of Nonsense, a very successful volume of limericks, and in 1867 his most famous poem, The Owl and the Pussycat, which he wrote for the children of his patron Edward Stanley, 13th Earl of Derby.


Although Lear's nonsense books were popular during his lifetime a rumour circulated that "Edward Lear" was a pseudonym, and that the books' true author was the man to whom Lear had dedicated the works, his patron the Earl of Derby. Supporters of this rumour offered as evidence the facts that both men were named Edward, and that "Lear" is an anagram of "Earl". Perhaps this is yet another example of British snobbery, like the insistence of many scholars thatShakespeare couldn’t have written his own plays because he didn’t have enough education.

Lear's delightful inventions, such as The Quangle Wangle and The Pobble Who Has No Toes, were brilliant jokes that came out of his profound knowledge of natural history. He adored children, although he never had any, and travelled all over Europe. He had many friends:


How pleasant to know Mr.Lear!

Who has written such volumes of stuff!

Some think him ill-tempered and queer,

But a few think him pleasant enough.


His mind is concrete and fastidious,

His nose is remarkably big;

His visage is more or less hideous,

His beard it resembles a wig.

Lear was constantly worried about money and his letters are full of this. In 1863 he begged an aristocratic friend to “ write to Lord Palmerston to ask him to ask the Queen to ask the King of Greece” to create a job for him as “Lord High Bosh and Nonsense Producer...with permission to wear a fool’s cap(or mitre)....three pounds of butter yearly and a little pig, - and a small donkey to ride on.” He fantasized about selling his illustrations to Tennyson’s poems for £18,000 and buying a “chocolate coloured carriage speckled with gold, driven by a coachman in green vestments and silver spectacles wherein sitting on a lofty cushion composed of muffins and volumes of the Apocrypha.”


Lear fell unrequitedly in love with several men and proposed marriage (unsuccessfully) to a woman 46 years younger than him. He died in 1888 - just a few months after his famous cat, Old Foss - in San Remo on the Italian Riviera, where he had lived for eighteen years with his Albanian servant. I hope his solitary life gave him pleasure and that he sometimes, like the Owl and the Pussycat, found someone to dance with:


'Dear pig, are you willing to sell for one shilling

So they took it away, and were married next day

By the Turkey who lives on the hill.

They dined on mince, and slices of quince,

Which they ate with a runcible spoon;

And hand in hand, on the edge of the sand,

They danced by the light of the moon,

They danced by the light of the moon.