Portrait of a Lady . A guest post by Philip Stott. Introduced by Adèle Geras

For some years now, the Stotts, (Philip and Anne) have been good friends of mine. The friendship began when Philip emailed my late husband,  Norman Geras, on  his blog (normblog).  Norm very quickly discovered that Anne Stott knew a great deal about many things, not least Jane Austen, and he often asked Anne to write for the blog, which she did with great style and erudition.  I'm hoping to ask her to contribute to the History Girls in the fullness of time but meanwhile, her husband, Philip Stott, is writing here about a forthcoming exhibition at Ightham Mote.

It's thanks to the Stotts that I have such a good working knowledge of National Trust Scones. I have visited NT properties mainly with them and what they don't know about almost everything isn't worth knowing. They're the best of guides and now Philip has found his true métier as a Volunteer at Ightham Mote. He's writing here about something I hope many History Girls and also many readers of this blog might find interesting.


“She had an immense curiosity about life, and was constantly staring and wondering.”

The story of Elsie Palmer, and of her spirited mother, is worthy of a Henry James novel.

In April 1887, a still-young American woman, Mary Lincoln Mellen Palmer, Queen, brought her three daughters, Elsie, Dorothy (‘Dos’), and Marjory, to live at the late-Medieval moated manor house of Ightham Mote in Kent, England [https://www.nationaltrust.org.uk/ightham-mote]. The family were to stay at the Mote until March 1890. Their father, William Jackson Palmer, the founder of Colorado Springs, a famous railroad engineer, Union Army General, and recipient of the Medal of Honor, would visit them from time to time, as work permitted, most notably for Christmas, 1887.

During her residence at the Mote, Queen, who had received her universally-used nickname from her maternal grandmother, entertained many distinguished people in the world of the arts. Her fascination with the Aesthetic Movement was why she had chosen to rent an English moated manor house in the first instance, and she soon began to turn it into a rural ‘salon’ visited by such luminaries as the great American writer, Henry James.

[This photo was taken in1889 and shows Queen Mellen Palmer with her eldest daughter, Elsie, and the family dog, in the north-eastern corner of the Medieval courtyard at Ightham Mote, Kent. Ightham Mote Archives.] 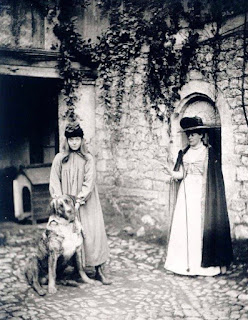 These notable Americans were joined by some of the leading lights of the English Aesthetic Movement, including:
the painter Edward Coley Burne-Jones; the doyen of the Arts and Craft movement, William Morris; the novelist and poet, George Meredith; the actress, Ellen Terry; and the costume designer, Alice Strettell (Mrs J. Comyns Carr).
Most important of all, however, Queen commissioned the controversial American portraitist, John Singer Sargent, to paint her eldest daughter, Elsie, against the antique linen-fold panelling of the Mote. This portrait is now regarded as one of Sargent’s masterpieces. It is known as A Young Lady in White, and it normally hangs at the Colorado Springs Fine Arts Center in the beautiful mountain resort established by her father.
However, from March 4 until 23 December, 2017, this stunning work has returned to the old house in which it was painted, where it will be displayed on a special stage in a room close to where Elsie took up her pose, and where it forms the centre piece of a major Exhibition entitled The Queen of Ightham Mote - an American Interlude: Queen Palmer, John Singer Sargent and their Circle.
1 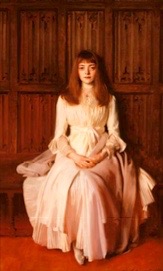 
John Singer Sargent’s powerful portrait of Elsie Palmer [oil on canvas; 190.5 x 114.3 cm] was mainly painted when she was aged 17. Over the years, it has been given a number of titles, including A Young Lady in White, Portrait of a Girl in White, and Portrait of Miss Elsie Palmer. For the portrait, Sargent made a range of pen-and-ink/oil sketches of Elsie, including an exquisite full-length oil sketch of her wearing the same dress in the late-Medieval Great Hall of Ightham Mote [exhibited in the Oriel Room]. The final portrait is inscribed, lower right, ‘John S. Sargent 1890’, and it was first shown at Joseph Comyns Carr’s New Gallery, Regent Street, London, in 1891.

The family owned the picture until the mid-1920s, when it was purchased by a family friend, Col. Charles Clifton, and presented to the Albright [-Knox] Art Gallery, Buffalo, N.Y. It was finally acquired in 1969 by the Colorado Springs Fine Arts Center with funds collected through public subscription. In 1998/99, it formed part of the important Sargent at the Tate exhibition in London.


Richard Ormond, Sargent’s great nephew and a world authority on the artist notes that:
“.. the portrait remains one of Sargent's most compelling and original characterisations."
He observes: “Elsie appears hauntingly beautiful, dressed in a costume that is both picturesquely antique and stylishly modern.
The linen-fold panelling behind her plays up the feeling of past times and historical associations.  Because she has not ‘come of age’, she wears her hair long, and her dress, as we can tell from a preliminary study, is ankle-length, another sign of her youth.” He further adds that the “... frontal and symmetrical pose is often to be found in pictures of the Madonna by Renaissance masters.”

The Exhibition also features many other items relating to the Palmer family’s stay at Ightham Mote, including replicas of Elsie’s dress and of Ellen Terry’s famous beetle- wing costume in which she played Lady Macbeth in 1888/89. But most importantly, there is a second major work by Sargent. While he was engaged on the great portrait of Elsie, he also produced a large canvas of bowls being played on the North, or ‘Bowling Green’, Lawn. This is a classic conversation piece distinguished by the portrayal of a group of people engaged in civilized conversation and genteel activity out of doors. 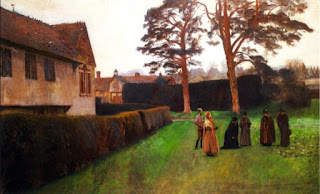 Typically, the  group comprises membersof the family (Queen and Elsie), with close friends (Alma Strettell; Violet, Sargent’s sister; and the Jamesons). Amusingly, it has often been taken to be a comment on English weather. The Hon. Sir Evan Charteris wrote of the scene in 1927: “Here he has caught English scenery, not at its best by any means, but in a grave and dreary mood, low in key and tone, but not lacking in truth either of colour or general effect. Moreover, the game goes forward as though the players themselves were affected by the opacity of the atmosphere.” Elsie recalled later that the ladies were all expected to wear hats. A Game of Bowls has been generously loaned to Ightham Mote for the Exhibition by Sotheby’s, New York, with the option to buy this fine work permanently for the house. An appeal has been launched to raise the necessary funds.
It would be wonderful if some of the History Girls were able to come to see Elsie and the Exhibition during the year, especially as Adèle Geras will be assisting Helen Craig, the creator of Angelina Ballerina, in an Angelina Ballerina and Henry workshop and trail. Helen is the great granddaughter of Ellen Terry, the fond friend of both Queen and Elsie, while her grandfather, Edward Gordon Craig, the famous theatre designer, was the childhood playmate of the three Palmer sisters during their stay at Ightham Mote. 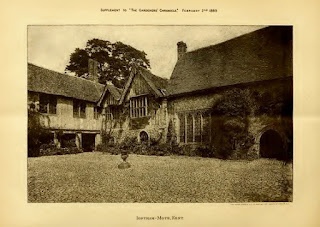 Philip Stott is Emeritus Professor in the University of London, where he taught at SOAS. Since his retirement, he has been a volunteer room guide and researcher at National Trust Ightham Mote. He has a long-term interest in early music and art. He is married to the historian and biographer, Anne Stott.
Posted by adele at 07:00

This made me think of The Canterville Ghost, by Oscar Wilde, where an American family come to stay in an English country house and are inconvenienced by a ghost. Lovely.

I cannot think why MÉTIER is in such large type but I've decided to leave it as it is and not start fossicking with the technology! Apologies to Philip!