Off to the Alderney Literature Festival. 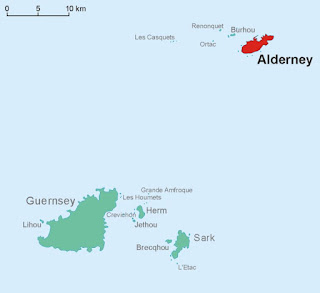 Well, I am writing this in haste this month so apologies for a short blog.

On the day this post is scheduled to go live,  I will be at the Alderney Festival of Historical Literature and preparing to give my talk on "Eleanor of Aquitaine: the fact behind the fiction and the fiction behind the fact."

I am also hoping to get in some walking around this small Channel Island, just three miles long and one and a half wide, situated  7 miles from the French coast and with a population of a little over 2,000 people. To get there from the UK mainland, one has to fly to Guernsey, and then take a a 20 minute 'island hopper' flight on an 18 seater light transport plane - outside of the summer months anyway.  Alderney a bird's eye view   I have never been to Alderney before but am very much looking forward to it.

The  Festival has been running since 2013 and this year's takes place from the 24th to the 26th of March and its theme is 'Perception versus Reality'  a subject very close to my heart following my recent researches into Eleanor of Aquitaine where the perception and the reality are poles apart - inasmuch as we currently understand what that reality might be (she says with an eyebrow raised in irony).  The premise of the debate at the festival is that 'historical reality is in fact a fluid concept.'  As well as my talk about Eleanor, I shall also be sitting on a panel with Imogen Robertson and Anna Mazzola asking how true to life the setting of a historical novel can be and what do historical novelists owe to the truth?  It's going to be a terrific discussion.

I am also very much looking forward to sitting in on a talk by Joyce Meader on 'Knitted comforts for the military from 1850 to the present day.'  I am not a knitter - would love to be but I don't have the manual dexterity or the logic to follow patterns.  However I am still fascinated by the subject.

I shall report when I return.  And in the meanwhile, here's the website.  http://www.alderneyliterarytrust.com/festival