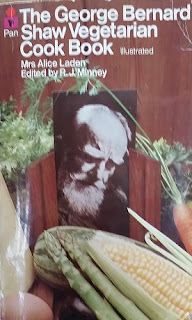 Yes, it really is a thing.

I used to consult The George Bernard Shaw Vegetarian Cookbook in the British Library but I have just acquired a battered second-hand copy of my own.

You probably know already that Shaw was a vociferous vegetarian, providing proof that you don’t have to eat flesh to maintain a vigorous presence in the world.

He converted to vegetarianism at the age of twenty-five, attributing the change to a line from Percy Bysshe Shelley’s The Revolt of Islam:

‘Never again may blood of bird or beast
Stain with its venomous stream a human feast!’

Shaw claimed that these lines ‘opened my eyes to the savagery of my diet.’

He was the author of such memorable quotes as

‘A mind of the calibre of mine cannot derive its nutriment from cows.’

‘Animals are my friends ... and I don't eat my friends.’
‘While we ourselves are the living graves of murdered beasts, how can we expect any ideal conditions on this earth?’

He also pointed out the health benefits of a vegetarian diet, insisting that ‘the strongest animals, such as the bull, are vegetarians.’

He asked his readers to ‘Think of the fierce energy concentrated in an acorn! You bury it in the ground and it explodes into a giant oak! Bury a sheep and nothing happens but decay.’
He regularly argued that his own longevity and good looks could be put down to his eating habits. At sixty-eight, Shaw is said to have told his biographer Archibald Henderson: ‘I look my age; and I am my age. It is the other people who look older than they are. What can you expect from people who eat corpses and drink spirits?’ 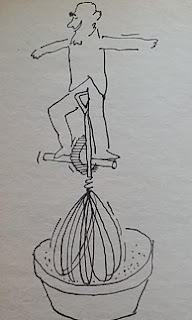 ‘The average age,’ Shaw argued, ‘of a meat eater is 63. I am on the verge of 85 and still work as hard as ever. I have lived quite long enough and am trying to die; but I simply cannot do it. A single beef-steak would finish me; but I cannot bring myself to swallow it. I am oppressed with a dread of living forever. That is the only disadvantage of vegetarianism.’

And indeed Shaw himself lived to nearly ninety-five. He imagined that his funeral hearse would be drawn by herds of oxen, sheep, pigs, chickens ‘and a small travelling aquarium of live fish, all wearing white scarves in honour of the man who perished rather than eat his fellow creatures.’

Despite all this, it has been suggested that Shaw’s initial move away from meat might have simply been because he could not afford it as a jobless young man living with (and on an allowance from) a poor mother who supported them both by giving singing lessons. While spending his days at the British Library writing books that no-one initially wanted, Shaw found his pocket would stretch only to meals in a few Bloomsbury establishments that served vegetarian food.

Also, unfortunately, Shaw did not love vegetarianism enough to actual go into the kitchen and deal with vegetables. For the first seventeen years of his regime, it was his mother’s maid who prepared all his specialist meals.
Then, from 1898, his wife Charlotte supervised the kitchen that provided his food. Also a teetotaller, Shaw insisted that his no meat fat or wine were used in the making of his food. For forty-five years Charlotte made sure this was so in spite of the regular lavish entertaining of carnivores at their home. She also indulged his obsessive calorie-counting, for Shaw was always keen to preserve his lean figure.

But when Charlotte died, Shaw – then 87 – persuaded his wife’s nurse to stay on as his cook-housekeeper. Alice Laden, a widow from Aberdeen, had been married to a strict vegetarian. She had trained in the art of vegetarian cooking under the celebrated German chef Mrs Gompertz. Mrs Laden took some persuading to settle in the rather isolated Shaw residence at Ayot St Lawrence, but eventually the writer succeeded.

In times of rationing, it was difficult to track down the provender he required, so his Rolls Royce and his chauffeur were put at her disposal. She even went as far as London to find good fruit and vegetables for her employer, for diet was far from plain. Among the recipes in the book are Sweetcorn soufflé, Cheese and celery pie, Tomatoes à la Bengal.

Shaw had a greedy sweet tooth. His cook reported finding him many evenings with a jar of sugar, which he ate greedily by the spoonful. If it wasn’t sugar, it was honey. He also loved cake and chocolate biscuits. 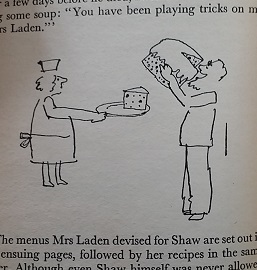 Mrs Laden’s menus and recipes were gathered together and published in 1972 by R.J. Minney at the Garnstone Press. It is the Pan Books paperback edition that I own now, which is illustrated with charming cartoons of Shaw and his housekeeper. 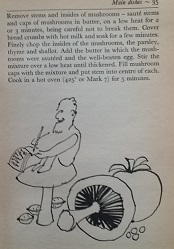 The artist is not credited, sadly, as his work is fine and witty. My favourite shows Shaw sitting on a large mushroom writing in a notebook. In another, the writer absent-mindedly dips his pen in his glass of water, to the disgust of his housekeeper. He and Mrs Laden compete in a crawled egg and spoon race. Shaw monocycles on top of a giant whisk, takes a brisk country walk past a colony of garden gnomes that look very much like himself, dashes for an ice-cream van, shaves himself with a cheese grater – and helps himself to the whole cake, leaving Mrs Laden with only the slice she has offered him.

Great blog and the book is a real treasure with those wonderful little cartoons (which I'd always assumed were by Shaw himself, but I don't know where I got that idea.)

I can't agree with Shaw, though, about vegetarianism. I've no argument with anyone who wants to be veggie, and there are some very good socio-economic arguments for it, but the health arguments are nonsense, and despite Shaw's rep for intelligence, his arguments seem to be nonsense too.

A bull is strong and vegetarian because it evolved to be vegetarian, not because of any virtue of its diet. A tiger is strong too, but feed it a vegetarian diet and it would sicken and die.

An acorn can 'explode' into an oak when buried while a sheep decays, because an acorn is a living seed or egg while the sheep is bloody dead. Chop down an oak tree and bury it and the oak tree will decay too. Shaw may have been having his little joke, but he might have bothered to see that it supported his argument too.

As for his looks and vigour in old age: I have a Scottish relative who is, at present 98, and when we visited her last year was out in her garden painting her fence. She still maintains her own garden, grows her own veg (such as she eats) does all her own housework and has a far wilder social life than me, what with bingo and supporting her local football club. She has eaten meat all her life, as much as she could have, whenever she could get it. She drinks spirits too. So one anecdote knocks down another.

As for Shaw shovelling in sugar and honey by the spoonful and claiming to be eating healthily...Ye gods.

Ooo - now I fancy a sweetcorn souffle! Wonderful snippets of a great writer's life and culinary requirements (provided, as you say, by someone else).

Yes, I am tempted by the sweetcorn soufflé, Joan. Thank you for your passion and detail, Sue! When I asked my vet if my cat could be vegetarian, even he was not as passionate or brilliantly anecdotal as you!

According to a 1989 review, the illustrations are by GBS himself. If not, and I can't find any other drawings by him, they're by someone at the time of publication - they have a 1960s style about them.
My favourite book title for patronising 'the fairer sex' is GBS's 'The Intelligent Woman's Guide to Socialism and Capitalism'.
Thank you Michelle.