March Guest Post - Georgia Hunter, We Were the Lucky Ones


When Georgia Hunter was fifteen years old, she learned that she came from a family of Holocaust survivors. Here she speaks to Charlotte Wightwick about her quest to uncover her family’s staggering history and how she turned this into her debut novel We Were the Lucky Ones.

Tell us a bit about We Were the Lucky Ones
My novel tracks my grandfather, his parents, and his siblings—a family of Polish Jews—as they scatter at the start of the Second World War, doing everything in their power to survive and to reunite.

The characters in the novel are based on your own family, but you didn’t know about this part of your family history until you were a teenager. Can you tell us about how it made you feel to discover what happened to them?

It was mind-blowing! Growing up, I knew my grandfather not as Addy Kurc, but as Eddy Courts, and I assumed he’d been born in the States. I learned that he came from a town called Radom, Poland, and about his Holocaust-era past a year after he died, when a high school English teacher assigned our class a project in looking back at our ancestral roots. I sat down with my grandmother, Caroline, and it was in that interview that I discovered I was a quarter Jewish, and that I came from a family of Holocaust survivors. It was a shocking revelation, of course—one that sparked an endless array of questions, the first of which was why was I just learning this now?

How did you go about researching everything that happened to them? 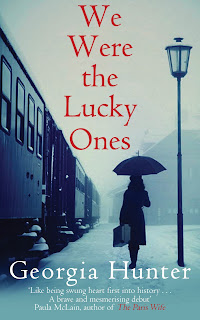 I began researching We Were the Lucky Ones nine years ago, when I flew to Paris to interview two relatives—Felicia, who was a year old at the start of the war, and Anna, who’s mother Halina is also a main character in my story. From there I travelled to Brazil and across the States, meeting with cousins and friends—anyone with a story to share…Where there were gaps in my timeline, I looked to outside resources—to archives, museums, ministries, and magistrates around the world, in hopes of tracking down relevant information. Over time, I collected details from organisations near and far, including a nine-page statement that had been hand-written by my grandfather’s older brother, extensive military records for others, and (in perhaps my most treasured find) the first-hand accounts of three relatives who had since passed, captured on video by the USC Shoah Foundation’s Visual History Archive.


Given the amount of research you did, and the accuracy with which you sought to portray your family, why did you choose a novel rather than writing a biography?
My goal, first and foremost, was to write a book that did my family’s story justice. It was important to me to tell it as truthfully as possibly. It was also important to me, however, that the story read less like a history lesson, and more like a novel: visceral and immersive. I wanted readers to understand, through the eyes of the Kurcs, what it meant to be Jewish and on the run during the Second World War… I wanted my ancestors to come across as human. And so, I allowed myself the creative license to dive deep into my settings and my characters’ psyches… In taking this route, it’s my hope that I was able, in the end, to bring the story even closer to the truth.

We Were the Lucky Ones is an amazing story of survival amongst unimaginable horror. Was there anything that you found out in the course of your research that you just couldn’t believe?

One of the first statistics I came across in my research that I found particularly shocking was that fewer than 300 of the 30,000 Jews from my family’s hometown of Radom, Poland, lived to see the end of the war. Knowing that the Kurcs made up a significant percentage of that 300 was an impossible truth to digest at first—we were, it seemed, a statistical anomaly.

It was also hard for me at times to wrap my head around the means by which my relatives were able to skirt death, over and over again.

One of the things that struck me in the novel was how quickly you portray things going from a normal, comfortable middle-class life to the ghetto, or to living outside the law. How do you think it was possible for things to change so quickly?

I, too, was struck by how quickly things changed for the Kurcs…I chose to open the book in the spring of 1939 for this exact reason—so I could depict what life was like before their worlds, like the worlds of so many other European Jews, were turned upside-down.

It’s hard to say how it was possible for things to change so quickly and drastically—I think that’s part of what makes the Holocaust so horrifying. I had to keep reminding myself as I wrote that, at the time, no one could foresee the atrocities that would unfold over the course of the war; that the Kurcs didn’t have the perspective we have now; that they were simply trying to survive from day to day, with no real concept of what was to come.

The other part of the book which I found fascinating, perhaps because I know relatively little about it, was what happened to the family after the war - their and so many others’ journeys to try and start better, safer lives. Can you say a bit about this?

It’s true that you don’t hear as many stories of how families and individuals, most of whom were left with nothing, were forced to start over after the war. I was somewhat surprised in my research to learn that my family’s narrative didn’t end on VE Day. The war was over, Allied victory had been declared, but the family remained scattered, with several relatives unaccounted for. Anti-Semitism was still rampant. Their lives were still at risk. They were homeless. And even when the Kurcs did finally find a safe haven in the States and in Brazil, life was far from easy… It would be years before they were able to put down roots. I talk about some of this in the “Since Then” section at the very end of the book.

Is there anything about the story that you don’t know, and which you wish you did?

I wish I could have asked my grandfather why he didn’t share this piece of his history with me when I was a kid. I don’t fault him for not telling me—I understand wanting to put this chapter of his past behind him—but I often wonder what reason, exactly, he’d offer. Would he tell me the period was too traumatic for him to relive? That he was trying to protect me? That he’d seen what being Polish and Jewish could have (should have, if left to the odds) done for his family and he didn’t want to subject his family to a similar risk? Or that he was far more consumed with looking ahead and ensuring a successful life for himself and his family than with rehashing the past? I’ll never know for sure, but I imagine his answer would have been some combination of all of the above.

We Were the Lucky Ones by Georgia Hunter is published by Allison & Busby at £12.99; you can find out more at http://georgiahunterauthor.com/

What a fascinating story. I definitely want to read this!