A Sweet Kind of Adultery by Catherine Hokin

I'm currently having a bit of an Annie Grey fan moment having just read The Greedy Queen (a fabulous account of Queen Victoria and food) and watched her recent BBC series The Sweet Makers which plunged four chefs back into the world of British confectionery production from the Tudors to the 1930s.

There were all kinds of wonderful nuggets in the series. I loved the concept of a Tudor sugar banquet - basically the dream 'pudding dinner' my kids always longed for - and the weird Georgian jellies but what intrigued me most was the Victorian muddling of sweets and poison. We bandy the word poison about a lot when it comes to food and, ironically, it's currently sugar that is only permitted a place at the Devil's table. This is neither the time nor the place to rant about clean-eating (although the news that coconut oil is basically lard had me in fits of joy for a week) and nuts and additives are a minefield for those with allergies, but at least they're not arsenic.

Yes arsenic, just one of the jolly compounds accidentally or intentionally used in food manufacturing in nineteenth century Britain. Fancy some more? What about copper sulphate used in bottled fruits and pickles or red lead for colouring Gloucester cheese or perhaps a tasty drop of strychnine in your rum or beer? If you're not in the mood for those, how about setting the breakfast table with a jug of chalk-filled milk, a nice loaf of bread with added plaster of Paris and a pat of butter brightened up with copper. Pop Tarts suddenly don't sound quite so bad after all.

Adulteration in food is nothing new. In the middle ages, costly spices were often bulked out with ground nutshells or pits or even stones and dust and bread flour was regularly mixed with sand and sawdust. Laws to try and regulate price, weight and quality of foodstuffs such as bread and beer began in 1266 and were heavily enforced by trade guilds. These laws, however, were to protect the market not the consumer and were patchy in their application outside towns and cities. Fast forward to the eighteenth and nineteenth centuries, with the mass move towards urbanisation, and adulteration becomes the rule rather than the exception across pretty much all food and drink sectors and one of the worst offending culprits was the confectionery trade.

Access to sugar democratised in the mid nineteenth century as prices fell sufficiently for sweets and associated items (such as cakes and biscuits) to come within working class budgets. A cottage industry grew up to feed the nation's new sweet tooth, particularly round the production of boiled sweets. However, this was also a period of intense competition as technological innovations in processes and packaging (and the growth of the advertising industry) opened the market to entrepreneurs such as Fry, Rowntree and Cadbury whose interest was not tiny kitchens but large scale manufacturing. Profit became king and corners were not so much cut by the smaller producers as rampaged round. Potentially lethal chemicals were used for colouring, especially to make the sweets attractive to children, eg: mercury sulphide (red), lead chromate (yellow), copper sulphate and good old arsenic (blue) and copper arsenite (green). Sugar was bulked out with plaster of Paris and limestone. Very often the hapless consumer could not tell the difference - as the sweet makers demonstrate in the programme when they compare adulterated and non-adulterated toffee.

Oh the poor consumer: as is too often the case, it took a rather nasty accident to wake everyone up to what they were really brightening their diets with. Analytical chemistry was on the rise in the nineteenth century, particularly with the development of the microscope, and a few brave souls had tried to turn whistle-blower on some of the more dubious practices. In 1820, a chemist by the name of Frederick Accum published The Treatise on Adulterations of Food and Culinary Poisons which contained detailed methods for detecting adulterants within foods and drink. He then followed this up by publishing a list of all those convicted of selling adulterated products and, not surprisingly, found himself up in court on charges of stealing and then damaging some of his source books. Reputation in tatters, poor old Accum fled home to Germany and the malpractices continued, with unfortunate results for the people of Bradford.

The Greenmarket in Bradford was home to a sweet stall owned by William Hardaker, who was known to locals as "Humbug Billy". He bought his humbugs from sweet maker Joseph Neal, who should have been making his lozenges from peppermint oil, sugar and gum. Neal, however, preferred the profit margin obtained by replacing part of the sugar with gypsum, a kind of plaster known in the trade as "daff". So far so every day but, in what must have been the one of the worst examples of  "you really can't get the staff," Neal sent his assistant to the pharmacy for his dodgy supplies where that assistant was served by another assistant and the resulting purchase was not 12 pounds of daff but 12 pounds of arsenic. The sweets were made - apparently they looked a bit odd and the sweet maker (James Appleton) came down with vomiting and pains in his hands during the process but that didn't stop Neal selling 40 pounds of the luscious lozenges to Hardaker. Within 24 hours of the first batch being sold, 200 people had arsenic poisoning and 21 died. 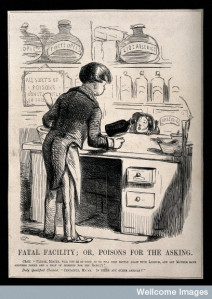 Bradford was lucky: the resulting trial (at which all were acquitted) estimated each humbug contained 9 grams of arsenic, twice the lethal dose, and enough had been distributed to kill 2000 people. And this was not an isolated case. The following year, 6 pupils at a school in Bristol plus a publican and his brother became violently ill after eating Bath buns purchased from a local bakers. When the buns were analysed, each was found to contain 7 grains of the paint pigment lead chromate which the baker had used rather than eggs to colour the buns bright yellow. Apparently he did it all the time but had somehow used too heavy a dose on this occasion. As with Bradford, no one was prosecuted because no laws had actually been broken. There was an outcry and laws were finally introduced (The Pharmacy Act, 1868 and the Adulteration of Food and Drugs Act 1872) which led to an ongoing recognition of food-borne illnesses and a programme of regulations to combat malpractices.

The chilling bit, of course, is the detection. In the middle ages, awareness of adulteration came through noticing changes to weight and smell and taste. As technology progressed, it became easier to detect the undetectable but that doesn't mean the threat went away - the adulterers just got cleverer and technology and malpractice always seem to have a lag, especially when profits are involved. A study produced in 2013 listed 10 common products still regularly picked up in tests as being adulterated, including maple syrup, wine and coffee and milk in China where it has been contaminated with melamine to make it appear more rich in protein. Kale anyone?
Posted by Catherine Hokin at 09:00

Great post - thank you. But despite everything, I'll still pass on the kale.

I think, these days, the police would spend a long time in small rooms with Joseph Neal's assistant. Did he really buy arsenic instead of daff by accident, or was it deliberate and he got a big kick out of knowing that many people would be very ill or even die? - But no law had been broken then!

I loved The Sweet Makers - especially the marzipan constructions they made in the Tudor one. I remember being so disappointed in the marzipan they did in the GBBO because it didn't match up to what I imagined from reading about a 'marchpane house' in Alison Uttley's A Traveller in Time. But thankfully the professional confectioners did meet my expectations! It was a really good programme - going into the darker side of sugary treats too.

Very interesting. When my father left school he worked in a grocery store in the early 30s and adulteration was still being carried out. Plus, the butter cane in and was cut in half. One half was labelled 1 shilling per pound, the other half one and sixpence. However I do think it unlikely that Fry, Rowntree and Cadbury, with their principles of Quaker probity, would adulterate. Did the programme finger them?

Hi Leslie - no the programme put the problem at the independent sweet shops door,although they were reacting to competition caused by Frys etc so a bit of a vicious circle.

I write Victorian crime fiction...so watched the sweet making programme with great relish (sic). The almost total adulteration of all food pre the Food and Drink Laws was endemic...and frequently deliberate. BUT look at what happens now? How often do we find common foodstuffs bulked out or chemically enhanced? Nothing is learned!