This is the latest in my series of posts about those dashing adventurers, the plant-hunters. The previous one is here, and that has links to the earlier ones.

David Douglas, a Scot born in Scone, near Perth, in 1799, seems to have been even more indefatigable than his fellow plant hunters. He needed to be, because he had more than his fair share of bad luck, dreadful weather, and very unpleasant accidents.

Unlike the character in my forthcoming children's book about plant hunting, Jack Fortune, Douglas was interested in gardening and botany from a very early age. At the age of eleven, he became an apprentice to William Beatty, head gardener to the Earl of Mansfield at Scone Palace, later moving to Sir Robert Preston's gardens at Valleyfield, near Culross in Fife, where he also immersed himself in study in Sir Robert's library. In 1820, he began a new job at the Botanic Gardens in Edinburgh, where Sir William Hooker had just become Professor of Botany. (Sir William's younger son was Joseph, who later made the journeys to the Himalayas on which my Jack's travels are based - though Jack's adventures take place much earlier than Joseph's. Sorry if this is confusing...)

The Horticultural Society of London (now the RHS) had recently been set up, and when they asked Sir William if he could recommend a suitable botanical collector to work for them, he had no hesitation in suggesting Douglas. 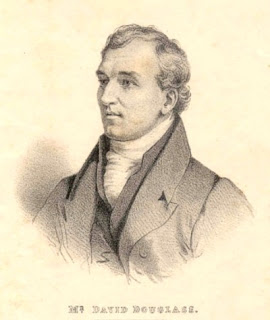 Douglas, delighted, hastened off to London, expecting to be sent to China. Unfortunately, political unrest brought about a change of plan, and instead he was sent to New England. Following a pattern which was sadly set to continue, he endured a dreadful crossing with bad weather and a shortage of food, only to be told on arrival by immigration officials that he was too scruffy, and wouldn't be allowed to land till he'd bought some new clothes.

Vast tracts of America were as yet unexplored by settlers, so when Douglas set off into the interior - near Lake Eyrie - he was pretty much venturing into the unknown. He was thrilled by the wilderness and plunged happily into collecting lots of seed, despite his horse bolting (it turned out it only understood French), his cart driver stealing his possessions and abandoning him, and almost sinking on his way back to Buffalo in one of the violent storms which seemed to positively pursue him.

Somehow he got safely back to London, where the Horticultural Society was delighted with the species he'd brought home, which included a wide variety of fruit trees - perfect for the walled gardens of Britain's country houses.

His next trip was to the Pacific North-west of America, which entailed travelling all the way round the tip of South America and up the other side - it took eight and a half months. Living at Fort Vancouver, the base of the Hudson bay Company, he came to know and admire the Native Americans and use them as guides. Doubtless amused by his plant-hunting activities, they called him 'Grass Man'.


Here he came across the flowering currant, which graces and scents so many gardens in spring, and the majestic fir which bears his name. He travelled by canoe up the Columbia River, and explored the countryside, battling with challenging terrain, hot sun, exhaustion and hunger.

Returning to Fort Vancouver, our unfortunate hero intended to catch a boat back to England, but missed it by an hour after being delayed by an abscess in his knee joint, caused when he cut himself on a rusty nail. So he stayed, and the following spring climbed the Blue Mountains, naturally encountering terrible weather. Partly as a result of snow-blindness, and partly due to sand which got in his eyes in the desert, he began to have problems with his eyesight.


So it went on. He continued to collect plants and seeds, despite falling down a ravine, encountering grizzly bears, and almost getting drowned in Hudson Bay.

Not surprisingly, when he returned to London, he found it difficult to fit in. Two years later, he set off again for North America. He revisited the Columbia River and then headed south to California, popped in to Hawaii and then went back north. He wanted to visit Alaska and then head home via Siberia. (!) However, with his usual luck, he lost all his possessions, his plant collection and his journal, when his canoe ran on to rocks in the Frazier river and he was thrown into the water and caught up in a whirlpool.

Understandably disheartened and in poor health, he decided to return to Hawaii. It was to prove a disastrous decision. Whilst staying with a local man named Ned Gurney, who trapped wild cattle for a living, using covered pits to trap the animals. At some point, Douglas apparently heard the cries of a bullock which had been trapped in a pit, went to investigate, fell in, and was gored and trampled to death; only being found some hours later.

Obviously, this was a tragic end for such a courageous man. But he had achieved a great deal. Britain has only three native conifers (the yew, the Scots pine, and common juniper): a great proportion of the conifers which form part of Britain's garden landscape today were introduced by him, as were the trees which later formed the basis for forestry enterprises all over the world. If you've ever despaired of the rows of conifers marching over British hills, you might have mixed feeling about this; but I don't think we can blame Douglas for the way his introductions were used - and we can only admire his dogged courage and persistence, in the face of a barrage of bad luck and unfortunate accidents.

(I am as ever indebted for my accounts of the plant hunters to 'The Plant Hunters', by Musgrave, Gardner and Musgrave - a really fascinating book.)

I can't believe the poor guy's luck - but these stories of plant hunters are fascinating. Can't wait till Jack Fortune comes out!

Very interesting. This is yet another part of history that is rarely recorded. I'm absolutely amazed at the persistence of the plant hunters! Is there any book you know of which lists when plants were introduced to Britain? This would be a boon for historical novelists. I was recently reading a novel set in the Middle Ages which mentioned the sycamore, and I was not sure if that was accurate, but apparently it probably was.