A Workshop at The Museum of Cambridge by Adèle Geras

On a Wednesday in late July, I went to a talk by Carolyn Ferguson at the Museum of Cambridge. It was part of a series of workshops and talks which looked at the various aspects of textile arts: patchwork and embroidery and so on. We were promised a look at some of the quilts owned by the museum and also at some from Carolyn's own private collection. As soon as I heard about it, I knew I wanted to attend. There were two main reasons for this. First, I'm obsessed with patchwork. One of my very first books for children was called Apricots at Midnight.  In this book, an old lady called Aunt Pinny told stories to a child at bedtime. Each tale sprang from one of the patches on the quilt covering the child's bed, and was about something from Aunt Pinny's life. I've always thought that that image: the patches of material mirroring episodes in your life, was a very powerful one. Patchwork has been with us for hundreds of years and its different manifestations and the different circumstances in which it's been made fascinate me. 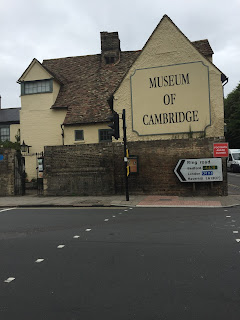 The second reason I wanted to go to Carolyn's talk was more personal. She was at school with me, at Roedean, and in those days  she was a good friend of mine called Carolyn Ballantyne. When we moved to Cambridge in 2010, finding that Carolyn lived there too was a wonderful surprise. We hadn't seen one another for decades, but when we met again, it seemed to me that she'd changed very little. Her hair is a different colour now, but otherwise she's just the same. Nevertheless, when I learned that she was both a quilter herself and also a member of The British Quilt Study Group; that she'd written papers on the history of the colour, Turkey Red, and on the Rajah Quilt; that she had a deep and scholarly interest in  textiles  and that she was also involved with the Museum of Cambridge, I was very pleasantly surprised. I've sent Carolyn a few questions which she's kindly agreed to answer. I'm going to intersperse her answers with some thoughts about the talk she gave.

The Museum of Cambridge, of which Carolyn is a Trustee, dates from the 17th century and  used to be a coaching inn. It stands at a crossroads, very near Kettle's Yard. It's full of fascinating things, mostly local, and the rooms are small and different from one another and seem to have been stuck together haphazardly. The stairs are wooden. It's delightfully  unslick in any way and a visit there is a real pleasure. 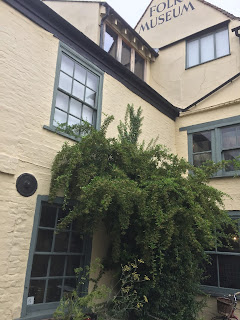 AG: I have no memory of you sewing, or embroidering at school. Am I blotting this out because I was so useless at such things? When did you start being interested in patchwork and quilting?

CF: My mother and her mother, my English Granny, were both very keen sewers and my Scots Granny was a tailor so I was probably bound to have some stitching in my life. My first patchwork was a teacosy made with my English Granny around the age of 8 from a set of Liberty linen samples. My mother used it for many years until it fell apart. I made various clothes at school, a petticoat and a felt skirt are things that I remember best. I still have the sampler that I started (but never finished) for O Level art too. In the 1970s I bought some Laura Ashley squares and did some basic patchwork but it was when we lived in Hong Kong and I went to a class run by an American lady that I really learnt to quilt and to do patchwork by machine which was a real revelation! 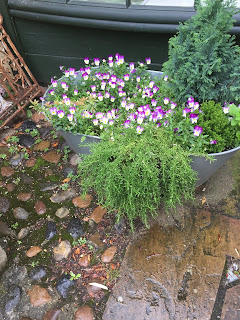 Carolyn's talk took the form of a slide show of various coverlets, quilts, bedcovers, some actually quilted and some not, starting with one from about 1400. The Tristram Quilt, made in Sicily, is the earliest example we have (it's in the V&A) and when a replica was made of this, it took modern quilters days and days of work. Below are two photos of one of the quilts from Carolyn's own collection. There were ten of us, and we all put on white gloves to look at it more carefully.

AG: You've written monographs and papers about historical textiles. Can you say something about whether the interest in the history springs from the making, or is it the other way round? I suppose I'm asking: how do the writing and the making relate to one another?

CF:I was always interested in History at school and also in historic artefacts. Do you remember the ‘Taste and Judgement’ displays? [these were objects exhibited from time to time at school, about which we had to comment and which we had to judge for their beauty, usefulness etc.] They kindled an interest in antiques - again something that my Granny was keen on. She was an avid buyer and loved auctions too. I suppose that textile research just puts together my scientific research brain with a love of textile. 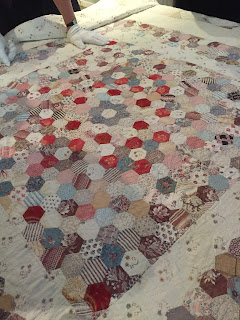 Carolyn took us through the way the art developed as the techniques of printing and manufactured advanced. It was quite fascinating to see how every change in the fashion of the day was reflected in the way coverlets and quilts came to be made. 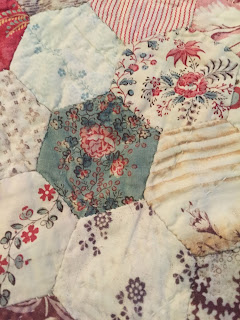 The red quilt below was made in the 1840s in Stratford - upon - Avon by many hands. In the centre is the church where Shakespeare is buried, Holy Trinity. Many people were given a square to embroider in their own way, often using printed patterns that could be ironed on to the cloth. There's a similar patchwork made by Cambridge Ladies, led by the wives of the Masters of various colleges, and   Carolyn has a great interest in this quilt about which she's written and spoken extensively. 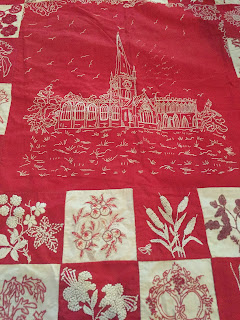 AG: Knitting is the only craft I'm any good at, and I always have some knitting on the go. Are you always making something with your hands, whatever else is happening?

CF: I am not sure whether you mean research or stitch? I am still trying to write up my 5 years of research for the Masters’ Wives quilt and my sewing projects seem to take a back seat. I have numerous things on the go including a memory piece and a small quilt for my nephew’s next baby but I’m not always making things these days.  I find that there are lots of other things to be done. I seem to wear quite a few ‘hats’!

Below is the 'jockey cap' style of patchwork. The quilt is in the Museum and I'm grateful to have been allowed to photograph it.  There are many different styles. You can make patchwork out of large squares, strips, hexagons, or combinations of shapes.  Crazy Quilting combines many different kinds of fabric, in irregular shapes. American Quilts are different from British quilts. With the exception of communal patchworks, like the Stratford quilt, the Rajah Quilt and the Masters' Wives Quilt, these are often the work of single person, who has used the material available to her (or him...there were male quilters too, often in the Army or the Navy) and for reasons of their own. For example the Brereton patchwork, hangings for a four-poster bed, were made by Anna Maria Brereton mourning the death of the five children she lost: four in in infancy and one later on. 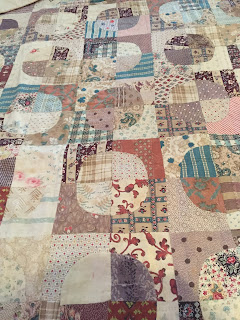 AG: How did you become involved with the Museum of Cambridge?

CF: I suppose that it was about 10 years ago that I first became involved when the Museum did a small exhibition about patchwork and I wrote all the information boards and helped set up the display. My most recent involvement started in 2012, first with the Masters’ Wives quilt then organising and making the community quilt, helping document the textiles and clothing and from the start of this year as a Trustee with special interest in the Collection. I have also given talks at the various History Festivals organised by the Museum.

Below is a photo of Carolyn's pamphlet about Turkey Red. This was the name of the red dye in the late 1700s which enabled red to be printed on cotton in a colour - fast way for the first time. Turkey Red revolutionised fabric production for one thing and for another, it's a wonderful colour. 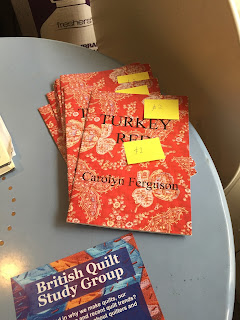 The ladies who came to this talk were all quilters, apart from me. One of them had made a patchwork by sewing together stamps from her husband's collection, each one meticulously bound in paper and sewn together with stitches so tiny that you could hardly see them. The ways that some of these old quilts, both Carolyn's own and the ones belonging to the Museum, were found were also interesting: in a cupboard, in a chest somewhere. Look at your old boxes if you have an attic. You don't know what you might find there. But if you do own precious heirlooms, do not store them in plastic bags...there was a terrifying tale of someone whose cleaner threw a bin bag containing a very beautiful and valuable quilt out with the rubbish. Beware...

And thanks to Carolyn and the Museum for a really wonderful morning.
I'm ending this post with a photo of a pin wheel quilt made by Carolyn herself. 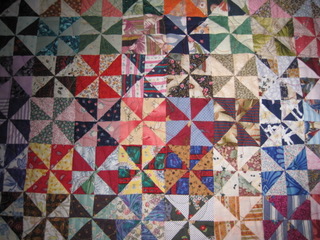 
Carolyn Ferguson is a textile historian and independent scholar whose main interests are looking at nineteenth-century quilts and coverlets from a social history perspective.


Carolyn is currently researching the Cambridge Mastera' Wives coverlet and has collaborated with Dr Ann Kennedy Smith on research into Cambridge University wives 1882–1914, in particular the twelve influential women who became the Ladies Dining Society. In 2015 they presented a paper entitled ‘The Cambridge Wives Lives: Rewriting the Victorian Marriage’ for the Writing Lives Together conference. In May 2017 she presented ‘The Detective Story of the Masters’ Wives Coverlet: A Study in the Iconography of Embroidered Signature coverlets’ at the Textile Society Research Symposium.
Posted by adele at 01:30

Looking at these photos, it's struck me how interesting comparing fashions in patchwork with fashions in the more official sorts of Art might be. Thanks for a stimulating read, Adele and Carolyn.

Lovely post, Adele - thank you. Carolyn's talk sounded fascinating, and the photos took me back a few years. I used to do quite a bit of patchwork, but once I started writing I found all my creative juices were going into my stories instead. However, my daughter still has some of my patchwork cushion covers, parts of which were made from some of her old dresses.

Fascinating talk - lovely to see all the old quilts. I'm a bit of hoarder of scraps of material and keep meaning to do something proper with them. I loved Apricots at Midnight, although the story about the 'ghost dress' scared nine year old me a little...!