WHEN CLARET WAS PINK: Wine production in the Middle Ages by Elizabeth Chadwick

"One who takes this is especially exhilarated and restored by a raisin wine which is clear to the bottom of the cup, in its clarity similar to the tears of a penitent, and the colour is that of an oxhorn.  It descends like lightning up on one who takes it - most tasty as an almond nut, quick as a squirrel, frisky as a kid, strong in the manner of a host of Cistercians or grey monks, emitting a kind of spark; it is supplied with the subtley of a syllogism of petit pont, delicate as fine cotton, it exceeds crystal in coolness."

This lyrical analysis stands up to anything that today's wine critics might write.  It was penned in the early 13th century by one Alexander Nequam, a monk of St Albans who had grown up sharing his mother Hodierna's breastmilk with none other than Richard the Lionheart, whose wetnurse she was.  Clearly he was a connoisseur from the start of his drinking life.

My characters imbibe a lot of wine in my novels.  The protagonists usually have a high status lifestyle and this tends to be their drink of habit.  Often the first thing they do when they walk into a room is reach for a flagon (or have the servant do it).

But what sort of wine were they drinking?

I had always somehow assumed that the standard medieval wine was a robust red. That's how it always appears in films and books,  but researching recently I found that (as in all things when you actually begin digging) it ain't necessarily so.  Most of the wines produced in Northern Europe, including Britain were whites. During the 12th century  most of the wine imported across the Channel from the Continent was a light, acidic white and the wine of choice for the wine drinkers in the population.  Henry II granted the burgesses of Rouen a monopoly on the export of wines to England.

When Rouen fell to the French in the early 13th century, trade turned for a couple of decades to the port of La Rochelle.  Here too, the Poitevan wines sold to the English market were similar acidic whites.  When in 1224, La Rochelle fell to France, the English had to look elsewhere for their wine. Fortunately for them, Bordeaux was still within their jurisdiction and for the next two hundred years, it became the focus of the wine trade between England and France.  Tastes had to change, for the wine of this region was red.  However, don't imagine that it was the full-blooded colour we see today on our supermarket shelves.  The 'vin ordinaire' of late medieval England was more akin to a modern rosé.  There was a wine known as 'clairet', the ancestor of modern claret, but it was pink.  There was a wine drink known as 'clarry' but it had nothing to do with claret and was a spiced wine sweetened with honey and with additions of ginger, saffron and pepper.

How was the wine made?


For white wine the grapes were collected in baskets and tipped into large vats where they were trodden by workers or crushed by planks of wood and the first juice collected to make wine.  The remaining mulch was put through a wine press to extract more liquid from the mulch.  This was put into barrels where fermentation occurred in a matter of days. The barrels were put in a fermentation barn and then it was the luck of the draw with regard to temperature how well that process would go.  Too cold and there would be no fermentation and too much heat would stop the process.  Too lively a fermentation and the barrel might explode!  Some German growers of Rhenish wine were known to keep their barns heated in order to promote fermentation.


With red wines, fermentation was a longer process. Sometimes stalks were removed from the grapes before processing in order to lessen the tannin content and bring forward the time when they were ready to drink. Red grapes fermented rapidly and so it was necessary not to fill the vats to the brim lest they overflowed and also that the people treading the grapes always had their heads above the rim of the vat lest they were overcome by carbon dioxide poisoning.


Once fermentation had begun - usually within hours, the vats were covered with planks.   On top of the fermenting must, the skins, pips and debris would float.  Now it was the wine-maker's professional skill to decide how many times to push this debric back into the fermenting mixture and how long to leave the ferment. The longer the ferment, the more strongly coloured the wine.  The earlier mentioned pink rosé or vin clairet for the English market was generally ready in a day. Meanwhile, the flotation material was eventually skimmed off and pressed through a wine press.  It might be pressed as much as three times, becoming more bitter with each pressing.
Once all the juice had been extracted from the crushed grapes, the debris was then mixed with water and left to ferment for 3 days.  This produced an almost colourless drink at around 2% proof with various names in different regions, piquette being one such name, or buvande.  It was cheap and drunk by the poor and by thirsty workers.  Finally, the mulch was mixed with straw and put on the fields.
This new wine was quickly sent from the producers to the market.  It didn't keep and transportation could play havoc with the contents.  Last year's wine was viewed as decidedly dodgy by buyers and the preference was always for 'New Wine'. We are told by cleric Peter of Blois who served at the  Angevin court, all about the terrible wine served by Henry II.  Apparently it was 'stale, sour, thick, greasy, and tasting of pitch from the cask.  'I have sometimes seen even great lords served with wine so muddy that a man must needs close his eyes and clench his teeth, wry-mouthed and shuddering, and filtering the stuff rather than drinking.'

The most prestigious wines of all, known as 'sweet wines' came from Greece.  Known variously as malmsey, (malvoise in France) Romeney, Vernage, Tyre, muscadel, or Greek wine, it was produced in the Eastern Mediterranean, especially mainland Greece.  It was exported to Europe by the Venetians from the port of Monemvasia. Malmsey was also produced in Crete and exported via the port of Candia.  Sweet wine grapes were harvested late when the grapes had been semi-dried by the sun and were more like raisins.  This increased the sweetness and the alcohol content. The wine also stored better and could be kept for more than one season.
It's one of these type of wines that Alexander Nequam praises so fulsomely at the top of this blog.
Something else I came across recently with reference to wine was reading a plaque beside a wine jug in a museum (I'm afraid I've forgotten which museum, I've been on something of a fest recently!) but the comment was made that along with wine imports also came sales of fancy jugs in which to serve that wine and that opportunity was a big hit with consumers - a clever way of diversifying and maximising profits!

There is far more to be said about the wine trade than I can fit into this short article.  I can highly recommend the below book for further reading though for anyone wanting to read up more thoroughly on the subject.

I raise my jug! 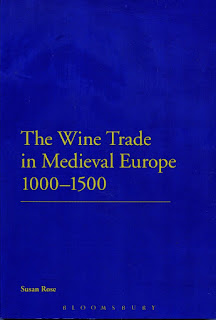 Elizabeth Chadwick is one of the UK's best selling historical novelists with a passion for all things medieval.  She enjoys wine best in a casserole and prefers to drink tea!

Having just spent a rather wine-based/soaked 2 weeks in Bordeaux, this was very interesting. Shared on my FB page - thank you!