'Cooking on a Prayer' by Karen Maitland

This morning I spent ages hunting through my bookshelves in search of a particular book that I was sure had a white cover, and which eventually proved to be red. But in the process, I rediscovered several books that I had forgotten I owned, including a cloth-bound volume entitled ‘Recipe Book, Swinton Parish Church Bazaar, St Stephen’s Stall, 1911’. The recipes were contributed by members of the parish and the book was printed to raise money for charity, though how it came to be in my possession, I have no idea.

Some of the dishes are wonderfully evocative of the period: how to make potted sardines; lobster cutlets; stuffed cod with brown gravy; and oxtail soup. (I can’t remember when I last saw an oxtail in a supermarket.) But it was the ‘useful household tips’ at the end that really distracted me from what I was supposed to be doing. One, contributed by the Rev. B.O.F. Heywood, said the way to cook the perfect boiled egg (presumably on his housekeeper’s day off) was to place it carefully in boiling water and time the cooking by reciting the famous poem by Felicia Hemans, ‘The Boy Stood on the Burning deck.’

Using words to time recipes is something that has gone on for centuries. In the Middle Ages, prayers or psalms were used to time cooking and brewing. Medieval cookery books frequently state that a sauce should be simmered for the time it takes to recite two Ave’s or a fish should be boiled for three pater nosters. This method would have been highly effective in the crowded kitchens of manor houses or monasteries where many dishes were being prepared at the same time, and several scullions or young servants might be working under the direction of a cook.
In the 14th century abbot’s kitchen in Glastonbury, which has been wonderfully restored, there were four fireplaces that could be used to cook everything from spit roasted meats to sauces and in the Middle Ages a narrow gantry ran across the kitchen above the servants’ heads so that the master of the kitchen could climb up and observe all the activity below, pacing back and forth to yell down instructions to those peeling, chopping, basting, and pounding. In all the noise, heat and bustle any inexperienced servants must have been grateful for the simple instructions of reciting something so familiar as a prayer they knew by rote.

Using prayers or psalms also had a protective element and they became viewed as a charm that would ward off food poisoning and accidents. This would be especially important when in an abbot's or nobleman’s kitchen where valuable spices, saffron and even gold leaf were part of the recipe, and servants ruining a dish might fear being beaten or dismissed. Demons were thought to lurk between the leaves of worts such as lettuce and cabbage which could make you ill if you swallowed them, likewise in rising bread. Crosses were cut into stalks and dough to drive them out, but you certainly didn’t want them diving into something else, so the prayers helped to banish evil from the hearth.

One of the unforeseen consequences of the Reformation must have been the number of dishes that were spoiled by cooks who suddenly found they could no longer time their cooking by reciting Ave’s without arousing suspicions that they were still practising ‘popery’. There must have been much secret muttering and mumbling going on in some kitchens. 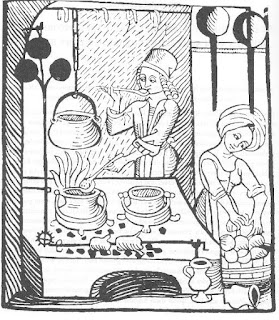 It is hardly surprising then, that in the witchcraft trials of later centuries those unfortunate enough to be interrogated were often accused of timing the brewing of their spells or even their suppers by reciting the Lord’s Prayer backwards or muttering the cursing Psalm 109.

In the 19th and first part of the 20th century, instead reciting poems or prayers to time cooking, rhyming poetry was being used to memorize the recipe itself, often because those employed as domestic staff did not read well, or simply because it wasn’t practical to constantly consult a recipe as you cooked in a busy kitchen where a valuable book was likely to be ruined by steam and splashes. Many organisations such as churches and charities produced these rhyming recipe books to raise funds and even those campaigning for women’s suffrage saw the advantage in it.

In Boston, in 1886, Hattie A. Burr produced ‘The Woman’s Suffrage Cook Book’, with contributions from many of the leading women political activists of the time including Elizabeth Cady Stanton who penned a rhyming recipe for breakfast.

'Cut smoothly from a wheaten loaf
Ten slices, good and true,
And brown them nicely, o'er the coals,
As you for toast would do.

Prepare a pint of thickened milk,
Some cod-fish shredded small;
And have on hand six hard-boiled eggs,
Just right to slice withal.

Moisten two pieces of the bread,
And lay them in a dish,
Upon them slice a hard-boiled egg,
Then scatter o'er with fish …'

As for me, I’ve found a recipe in that 1911 cook book for Ballagarry Buck contributed by Mr Filliter and Mr Taylor, it sounds like a rather interesting version of Welsh Rarebit and it thankfully requires no timing at all, so I’m off to try it.

I'd rather like to see a few (possibly CGI-enhanced) film scenes set in that kitchen with the master parading back and forth, looking down from his gantry on to all that's being prepared below.

As for those helpful recitations: At least, with the prayer there on your tongue, you wouldn't lose the device! We have three timers placed somewhere around the kitchen area, and can never finding a working one when timings needed.

Besides, those prayers are probably a gentler way of filling the time than the cookery curses and worries that recur in my head when cooking - but I do pity those poor, blameless, muttering "witches".

Do let us have the recipe for Ballagarry Buck if it turns out well. It sounds very interesting! The