I'm reading a book on my kindle and enjoying it.

No surprises there. A complaint I've heard all my life and still hear often (especially from my partner) is that I'm 'always reading,' always 'got my nose in a book.'

It's hard to put your nose in a kindle, though, and  I've found that when you read in bed and doze, the falling Kindle strikes your nose a far more destructive blow than a paper book. This hasn't stopped me. The book I'm reading and thoroughly enjoying at the moment (despite the risk to my nose) is The Town House by Norah Lofts. I've just finished her similar Bless This House.

Bless This House was first published in 1954, before I was born. The Town House, first published in 1959, is the start of a trilogy, being followed by The House at Old Vine (1961) and The House at Sunset (1962).
Bless This House is almost like a test-run for the trilogy, though it is a very good read in its own right (write?) It tells of the building of a house during Elizabeth I's reign and then, in a series of linked short stories, follows the people who owned it through the centuries for four hundred years.

The reader has an understanding that the characters lack. For instance, a girl living in the house in the 19th Century finds that she experiences debilitating despair whenever she goes near a window-seat in the Great Hall during daylight and an overwhelming terror if she enters the room at night. She doesn't understand it, but the reader knows who it was in an earlier century who first experienced that despair and left its mark on the house.

The Town House and its sequels take the same idea, of a house and the passing centuries, and extend it. The first book begins in 1391 and follows the building of 'the house at Old Vine' and then the people who lived in it and the times they lived in. The final book tells of the house, still standing, in the 1950s which was, when Norah Lofts wrote it, close to her present.

Born in 1904, in Norfolk, Norah Lofts came from a farming family - she said that all of her male relatives, for living memory, had been farmers and an understanding of farming and the seasons is a strong element in her writing. Her other great strength is a tolerant understanding of people. Not all her characters are likeable but their motivations are readily recognisable. She takes the opportunity to show us her people from different viewpoints. We will be with one character in their youth or middle-age, as they tell us their own story - and then, in the next story, we will see that character from the view-point of someone from another generation. We see how time has changed them and how they are judged by those around them. We, the readers, who know far more about them, may consider that judgement too harsh or too kind.

Norah Lofts also understood that no matter how hard some people work, no matter how much they hope or love or pray, the indifferent world goes on turning, the seasons go on changing and are not influenced by hard work, hope, prayer or love. What happens, happens - and if things turn out well for us, we think that it's our optimism or prayer or effort that made things fall that way. But it was simply luck; and for many other people, no better or worse than us, things went badly.

I first read these books when I was a teenager and loved them. As always, when you return to books you enjoyed when so much younger, I feared that I would be disappointed. Instead, I've been impressed all over again.

But here I was, reading them on a nose-bruising kindle. When I first read them, let alone when Norah Lofts wrote them, I don't think anything like an e-reader was being dreamed of even in Science Fiction. It was a time when people who actually worked in the computer industry predicted that there might be a world market for about twenty computers. This, of course, was when even the most excitingly modern computers were the size of a room. My partner, in the 60s, when he was just starting out as a local government accountant, was introduced to one such. Local big-wigs, he says, came to visit it and it used to sing songs for them. They were thrilled. His boss wanted him to become a servant of the computer since he was young and bright. (It probably terrified the boss, looming there in its room with its valves and wires.) But Davy couldn't see the point of the thing and ran away to sea instead. Now he mildly regrets this. But not a lot.

Today, I carry my little hand-held computer about with me from room to room, as I always used to carry a book - except that the kindle holds a library. Reading on it has become as ordinary to me as switching on the light or filling my kettle at the tap - ordinary things which are also quite astonishing and trail a long history behind them.

I also self-publish on the kindle and that has become an ordinary part of my life even though I only began five years ago. How quickly miraculous things become mundane. When I began self-publishing, I was working in a university as a Royal Literary Fund Fellow. I remember students becoming excited when they spotted my kindle. "Is that one of those electric reading thingies?"

I remember reading my kindle in a pub as I waited for my agent. It was a rather posh pub on the outskirts of Oxford and a retired general type stage-whispered to his wife: "That lady has one of those e-book gadgets." And when I read it in a cafe, the waitress quizzed me about it: Was it easy to get books for it? Was it easy to download them? She wanted to encourage her sons to read and she thought they would read an ebook more readily than a paper one.

These days, who would notice an ebook - except perhaps to sneer at it for not being the latest smart phone?

We thank Susan Price for this guest post. Leslie Wilson will return in September. 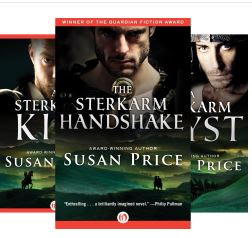 Must go back to Norah Lofts. It was in one of her books that I first learnt about 'pargetting' - making decorative panels and borders out of plaster. I think she may have used the character who gave the process its name. I've impressed people a couple of times when in Norfolk or Suffolk - "Oh, there's a fine bit of pargetting!" - and it's all thanks to Norah!

Sue's comment can apply equally to my knowledge of pargetting, all thank to Norah Lofts. I still have my original House Trilogy gathering dust and spiders in my garage - I really should give them a nicer home.

Ooh, these sound similar to some of Elizabeth Goudge's books? I'll have to keep an eye out for them.