Last week, an old friend from New Zealand came to visit. We were thinking of places to go and I mentioned nearby Kenilworth Castle. By coincidence, Kenilworth was the first castle she'd visited when she came to the UK as a student to study at Oxford. It was the first castle she'd ever seen and she remembered marvelling at the size, the age, the beauty of the ruins. Although I only live a few miles away, I'd rather taken it's proximity for granted and hadn't actually visited for many years.


Kenilworth Castle is one of the great historical sites. A royal castle for most of its life, it is one of the finest surviving monuments of its kind. It's big and impressive. Built of the local red sandstone, it sits on rising ground, on the outskirts of Kenilworth town, at the meeting of two ancient trackways and the confluence of two small rivers.

The oldest part of it, the Great Tower, was built by Geoffrey de Clinton in the 1120s. It was added to significantly by King John who dammed the two streams, flooding the low lying land around, so the castle was surrounded by a wide body of water called 'the mere'. The top of the dam was widened to become a tiltyard, used for jousting and tournaments.

The castle changed hands, as castles do. It  was granted to Simon De Montfort who then lost it after his defeat at the Battle of Evesham by Henry III. Kenilworth was an exceptionally strong fortress, surrounded by water, with an Inner and Outer Court and high curtain walls. Some of De Montfort's followers withdrew to the castle and withstood the longest siege in English medieval history only to be defeated by starvation and disease.  Henry  III granted Kenilworth to his younger son, Edmund, who became the Earl of Lancaster. The Lancastrians set about making it even more impressive, John of Gaunt adding a Great Hall.

The castle remained in Lancastrian, then Tudor hands until it was granted to John Dudley by Henry VIII in gratitude for services rendered.

Kenilworth then came to John's son, Robert, Earl of Leicester and favourite of Elizabeth I. In a bid to impress the Queen and to improve his rather shaky social status, Robert Dudley embarked on extensive improvements to the castle, adding the tower block known as Leicester's Building specifically to provide private lodging for the Queen on her visits in 1572 and 1575.

He had the mere re-flooded, so that she could go boating and created a Privy Garden for her private enjoyment. The garden has recently been restored by English Heritage. It was surrounded by high hawthorn hedges to protect the queen from prying eyes and furnished with a marble fountain, obelisks and an aviary. The parterre is set out with beds planted with herbs and flowers. Each bed has a central standard holly. In the language of flowers, the holly bush symbolises deep desire. A subtle, or not so subtle, message from Leicester to his queen. 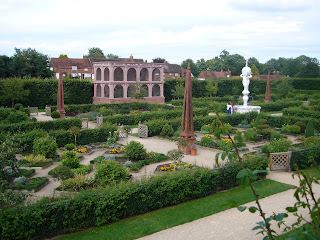 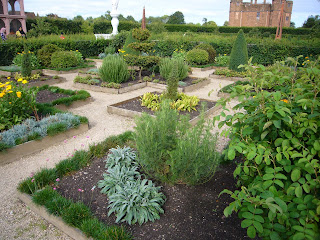 Leicester also added a new Gatehouse, the only part of the castle to survive intact the 'slighting' it got by the Parliamentarians after their victory in the English Civil War. The Gatehouse became a private dwelling, remained so until the 1960s and has only recently been opened to the public.

After its 'slighting', the castle became a Romantic Ruin and an early tourist destination, popularised by Sir Walter Scott's Kenilworth, painted by J. M. W. Turner, visited by Charles Dickens and Queen Victoria. It was rescued from completely falling down by bouts of restoration in the 19th and 20th centuries but Romantic Ruin is how I remembered it before this recent visit. English Heritage took over the care of the castle in 1984 and the extensive work that they have undertaken has transformed it, not only preserving and restoring the fabric of  the castle but making its history come alive.

I've never visited Kenilworth Castle - must do so, as it's not far from home. Thanks for this reminder, Celia. That word 'slighting' is very odd, isn't it? I'd never heard of it till I started researching the Civil War. It sounds harmless, like a bit of graffiti and a few broken windows! I just looked it up in my Collins dictionary, but that use of the word doesn't feature at all.