Children and War by Julie Summers

Children: War. Two words that perhaps do not sit together comfortably in one’s mind.  What have children to do with war?  What has war to do with children?  Surely, one would argue, children have to be protected from war, violence, horror, atrocities.

In the simplest sense that is right but it ignores a whole aspect of children’s lives and development which,  during the twentieth century, was profoundly affected by the First and Second World wars as well as other, more recent, conflicts.

War changes lives.  It changes lives for the better and the worse, for the unexpected and the unpredictable.  For some children the Second World War had a devastating effect on their homes and families so that they never recovered from the shock of it.  For others it literally made them.  Evacuation during the war offered some city children the opportunity for a better life, a chance at education and even, for some, a place at university that would have been unthinkable from the standpoint of their pre-war lives.  For boys caught in the poverty trap at the end of the nineteenth and early twentieth century a career in the army could offer them a life away from the streets, from trouble.  Again, it could literally make them. 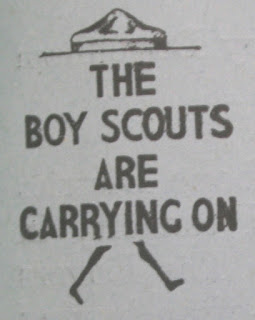 For Boy Scouts and Girl Guides the opportunities presented by the lack of young men and women, who had been enlisted for the services and war work, were exciting.  They worked as fire fighters and nursing assistants, couriers and stretcher bearers.  Some were even sent to relieve the concentration camps in Europe in 1945.
It is a topic worthy of examination since most of us, in one way or another, have some sort of experience of war, even if for children of today it is only what we see on the television.
The subject of boy soldiers is one that conjures up the ranks of young men who lied about their age to enlist in 1914 and 1915 to fight for King and Country.  Yet it was not unusual for boys to be engaged by the Army and Navy.  The Army had a long tradition of boy drummers while the cavalry employed boy trumpeters.  For some boys, who had got into trouble with the Law, there was a choice for them between going to prison or ‘taking the option’ which meant agreeing to serve in the Forces. For those who took the option a life in the Army could offer them opportunities and adventure beyond their wildest dreams.

The propaganda run by the government in the early years of the First World War appealed to young men’s sense of patriotism, which bordered on Jingoism.  It was hugely successful and drew in boys as well as to young men.  According to the historian, Richard van Emden, 250,000 underage boys succeeded in slipping through the net, despite protests from many parties.  Of those, thousands died and much of the pity of the First World War is directed at the lost generation of young men, those who had died young.  In the Second World War the government had no need for a general advertising campaign to recruit for the Forces as conscription had been introduced several months before the War broke out.  What the poster campaigns during the Second World War fixed on was specific appeals.  The RAF appealed to young men’s sense of adventure and patriotism; the WAAF and ATS encouraged young women to think of contributing actively towards the war by enlisting.

But during the Second World War the government had an equally great concern which was the safety of civilians.  With the introduction of aerial warfare the civilian population was as likely to be targeted as military positions and the drive to put women and children beyond the reach of the Luftwaffe led to the greatest evacuation of civilians in British history.  As 3.5 million children moved from city to village, town to country, from Britain to America and the Dominions an upheaval of a kind was introduced that still has repercussions in the world today.  It was described by one historian as the greatest social experiment of all times and by another as delivering social mobility in a way that no one in government could possibly have anticipated.

The shake-up caused by the mass movement of civilians was felt to an even greater extent on the continent where children were fleeing not just from the threat of aerial bombardment but from a far greater menace, which was the threat of genocide and systematic annihilation.  England offered children shelter long before the Second World War.  In 1915 a quarter of a million Belgians, including tens of thousands of children, came to Britain.
In 1937 4,000 Basque children arrived in Southampton to seek shelter from the Civil War that was tearing their country apart.  And then there was the threat from the Nazis for Jews, Gypsies, Siitis and other so-called ‘Undesirables’.  For these children the flight from terror often meant that almost everything they had had prior to the war was lost.  One Jewish refugee child, fleeing from Germany, was told she could bring one item with her on her journey to safety.  What should she choose from her array of clothes, toys, books and treasures?  In the end she brought her half-size violin.  The only vestige of her old life.  Today, children still come to Britain, fleeing persecution in some of the world’s worst trouble spots.  Like the children before them, they often have nothing to connect them to their past and similarly they have to start over to build a new life. Their experiences are terrifying and the sights they have seen so horrific that it almost defies our imagination. We have to hope that society will open its arms to them and give them some peace. Meantime, their plight should not be forgotten in the maelstrom of news coverage. Their stories need to be told, their violins heard.


This is my farewell blog for the History Girls. Thank you for inviting me and I shall follow the blog in the future. Good luck to all History Girls in their writing and everyday lives and to all the readers who follow the blogs daily, weekly or even just occasionally. Julie

An excellent post, Julie, and a timely reminder of the plight of children escaping from war in their own countries.

I am on a Greek island as I wrote this watching the small refugee children playing in and around the harbour with the local kids. I have certainly been asking myself why the future might hold for them. And what can we do to help rebuild their devastated countries so that, eventually, perhaps they will be able to return and build their live anew. Of course, for so many, those you have written about, there was no going back, but for some there was hope and unexpected futures. Today's war refugees, what will happen to them?
Good luck, Julie.