The Blue-Eyed Roman Girl from Africa 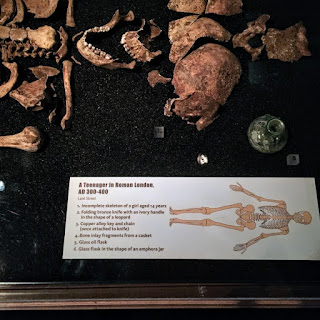 Sometimes it’s good for writers to have restrictions; it can make you more creative.

Yesterday I led a story-writing workshop in the Undercroft Gallery at the Guildhall Art Gallery, situated above London’s Roman amphitheatre. First I shared the simple seven-beat story-structure I use to map out every scene in my books and also for the overall arc of the story itself. I illustrated the seven plot beats via the first chapter of my first Roman Mystery, The Thieves of Ostia.

Then I told the parents and children about an idea I’m working on now, the story of the 14-year-old girl who lived in Roman London in the 4th century AD. The so-called Lant Street Teenager, named after the modern part of London where her grave was found, was one of four skeletons sent to McMasters University in Canada for in-depth study of DNA, isotopes and pathogens. Rebecca Redfern of the Museum of London has written eloquently about this and the other three skeletons. 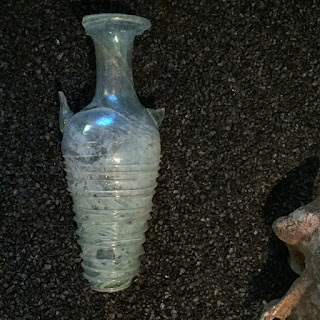 Science has made astounding advances and we know the following things about the Lant Street Girl.

- Her mother was from the eastern parts of the Roman Empire, perhaps Thrace or Dacia.
- Initial tests showed the girl had blue eyes and blonde hair
- She spent the first ten years of her life in North Africa
- She came to Londinium when she was about ten
- She ate a diet of fish, grain and vegetables
- She died aged 14 of unknown causes

Pathogens in her bones tell us about her health.
- She had rickets, a childhood disease caused by lack of calcium or vitamin D in the diet.
- As a result of this disease she had bandy legs.
- Like most Roman Londoners, she had periodontal disease and therefore probably bad breath. 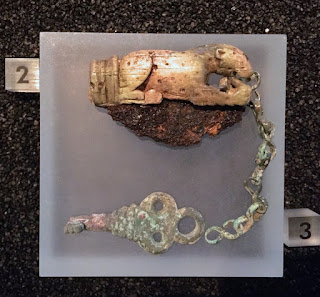 Her burial indicates that she was from a rich family. Grave goods found with the body include:
- Two glass bottles, possibly for perfume or unguent.
- A wooden box with ivory inlay including that of a goddess.
- An clasp knife with an iron blade and an ivory handle in the shape of a leopard. A small bronze key is attached to this knife by a bronze chain.

There has been lots of talk about the ethnic diversity in Roman London and this girl is the perfect example. Her father might have been a dark-skinned African, an Egyptian, a Phoenician or even a Roman. We don’t know yet as we don’t have access to the father’s DNA.

In my writing workshop yesterday we tried to come up with a story for the girl, whom I’ve provisionally called Dido as she might have come from Carthage in North Africa where other ivory-handled clasp-knifes have been found. (Dido was the beautiful Queen of Carthage who fell in love with the hero Aeneas in Virgil’s epic poem, The Aeneid.) 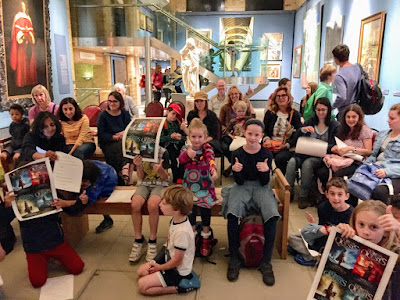 We brainstormed a possible story for the blue-eyed girl from Africa, based on the facts, and then used our informed imaginations to come up with possible ways she might have met her untimely end.

Here are some ways a Roman girl could have died in Londinium:
1. Death by illness.
2. Death by infection.
3. Death by childbirth complications.
4. Death by fall.
5. Death by drowning.
6. Death by choking.
7. Death by murder, strangulation or poison for example.
8. Death by starvation.
9. Death by runaway oxen
10. Death by wild animal or feral dog.
11. Death by fire or smoke inhalation.
12. Death by curse or bad omen.

Over twenty children attended the workshop and I hope that some of them might write a story which they can enter in a competition like BBC’s 500 Words or Butser Ancient Farm’s Poetry competition. (Just put your story in blank verse for the Butser entry!)

I know that even if every child and adult who attended came up with a story, each would be different. That’s the joy of writing historical fiction! 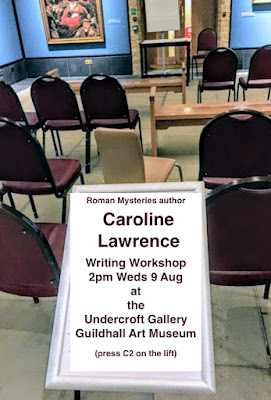 I’ll be giving the talk again today (Wednesday 9 August 2017) at 2pm so if you live in London and love history, Romans or writing, come help me tell a story about the Blue-Eyed Roman Girl from Africa.

For more information about all the great events of the #Londinium Festival celebrating Roman London for three months in 2017, go HERE.

Posted by Caroline Lawrence at 00:39

I so agree about restrictions making you more creative!