A Tale of Two Teas

“The British really are the only people in the world who become genuinely enlivened when presented with a hot beverage and a small plain biscuit.” Bill Bryson

Do you know who first popularised tea-drinking in British society? No, not Queen Anne, though in my time every schoolchild knew:

(Giving one a fair idea of how the word was pronounced in the 18th century. The "here" was Hampton Court).

We were taught it as an example of the trope Zeugma; does anyone learn that sort of stuff today?

I digress. The first queen who was so fond of tea was Charles ll's unfortunate wife Catherine of Braganza, who had developed the habit of tea-drinking in her native Portugal. 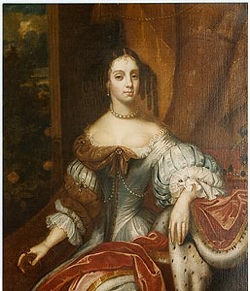 Catherine's favourite hot beverage became popular in her heyday, half a century before Pope's little satire, and was soon being served in 17th century coffee houses. Some also sold loose leaf tea, thus enabling middle class people to hold tea-parties in their own homes. Crucially, it also meant that women, who did not frequent coffee houses, could enjoy a cup in private.

Tea was so expensive that it became a favourite item for smugglers. In 1785 the government slashed the duty on tea, thus undercutting the smugglers and wiping out their trade in the leaves. It was around this time that people started adding milk to their cups of tea, because quite a lot of it was adulterated with other leaves or already once-brewed leaves and probably did not taste very nice! Sugar had always been a popular addition but that was as expensive as tea itself.

“You can never get a cup of tea large enough or a book long enough to suit me.”
― C.S. Lewis

Tea was not popular with everyone. John Wesley inveighed against it in 1748. The  preacher and founder of the Methodist movement, argued for complete abstinence from tea, on the grounds that it gave rise to 'numberless disorders, particularly those of a nervous kind'. He cited the example of himself, claiming that tea drinking had caused in him a 'Paralytick disorder', which had cleared up since he began to abstain from the beverage. Wesley urged that the money previously spent by an individual on tea should instead be given to the poor, and as an alternative hot infusions could be made from English herbs including sage or mint. 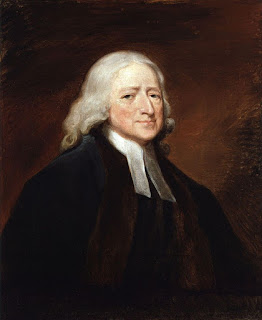 But Dr Johnson was a chain-drinker of tea, his kettle scarcely having time to cool before being boiled again. 25 cups a day was nothing to him, especially in the company of his friend Mrs Thrale.

In the first half of the 19th century, tea was touted as the solution to the perceived excessive alcohol consumption of the working classes and so  was promoted by the Methodists as part of the Temperance movement. Later in the century there was a rise in tea-shops, alongside coffee houses, with the former now catering for less wealthy patrons.

This was also the era of the genteel, invariable female, tea-party, indoors or out.

“There are few hours in life more agreeable than the hour dedicated to the ceremony known as afternoon tea.”
― Henry James, The Portrait of a Lady

During WW2, tea was rationed to 2oz per person (over the age of five) per week and this didn't stop until 1952. (There were extra rations for those in the armed forces and certain occupations such as firefighting). After the end of tea-rationing, an American import changed the nature of British tea-making for ever. The humble tea-bag no accounts for 96% of all cups made in the UK.

“Tea is one of the main stays of civilization in this country.”
― George Orwell, Smothered Under Journalism: 1946

To turn to my two teas: the first was on the Bluebell Railway in Sussex. It was husband's birthday present from last November, given by our middle daughter and son-in-law. So, long anticipated. 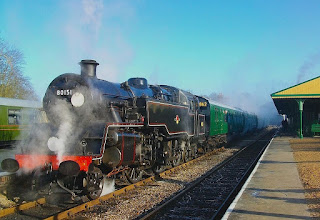 Many people feel the romance of steam trains and if you add to that the element of taking a meal - and that most traditional of meals, the afternoon tea - you have a delicious excitement about which not even Bill Bryson could could wonder.

But here's a thing: I grew up next to a steam railway line, literally. I lived in a ground floor railwayman's flat in Clapham Junction and nothing but a high brick wall separated us from the track and the smuts of what my mother called the "stinking billies." They were the bane of her life, as she needed to hang washing out in our back yard.

So "romance" was not exactly in my mind. 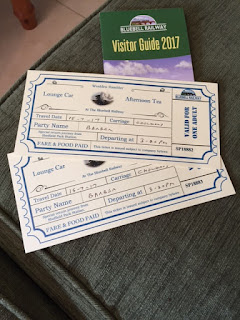 What was so interesting was that the whole experience was presented as a bit of history. The platforms, signage, waiting room, even the loos were all lovingly preserved or reconcontructed to be exactly as they were in 1960 when the line reopened for private travel after it had been closed three years earlier (nothing to do with Dr Beeching).

Now, depending on your age, you will regard that as an ancient date or only yesterday and we fell into the second category. We could both remember train carriages with wooden panelling on the inside and I could recall the windows that let down with a leather strap. As a railwayman's daughter, I travelled everywhere by train; we never had a car and our holidays and day trips were determined by their reachability from Clapham Junction, Waterloo or Victoria.

So we sat at our linen-clothed table for two in the dining car, watching the beautiful Sussex countryside out the window, expecting our tea and reminiscing about train journeys of our youth. Husband could recall silver coffee pots and as soon as he mentioned them, I could too.

For the young child having a birthday party with balloons and cake a few tables down from us it must have been a quite different experience.


It is a weird feeling to find your past firmly established as history and one I shan't forget. I'm sorry to say we didn't discuss Catherine of Braganza or John Wesley but Dr Johnson was definitely mentioned.

The route that the Bluebell railway takes, from Sheffield Park station, built for and named after the Earl of Sheffield, to acknowledge his financial contribution to its construction, to East Grinstead, is only eleven miles long. It was first built in 1877 so this bit of the line lasted 80 years. 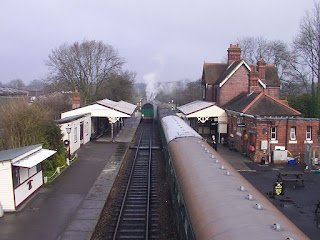 My second tea within the week took place at this establishment:

So no swaying movement to contend with but almost contemporary with the beginning of the Bluebell Railway.  The Randolph hotel in Oxford, familiar to millions of TV viewers round the world from the Inspector Morse series and its spin-offs, was opened in 1866, to accommodate a visit to the city by the then Prince and Princess of Wales. Its Victorian Gothic idiom, designed by William Wilkinson would have been familiar to those late 19th century rail travellers eleven years later.

I was there as a prize. I had offered "tea at the Randolph" and a discussion of any of my books to the highest bidder in the #authorsforgrenfell auction, which eventually raised nearly £200K for the Red Cross to use with survivors of the fire that will certainly remain a historical landmark of our time. 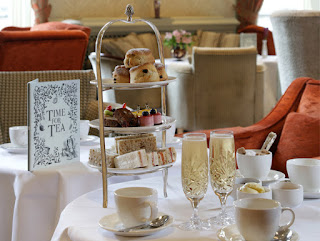 It looked like this, apart from the prosecco (though I have to admit the free glass offered on the Bluebell railway was not refused).

Bridget Blankley, who won the 2016 Diversity Award for writing for children, and I had a very good afternoon talking about Amazing Grace and tucking into a tea of finger sandwiches, scones with cream and jam and so many cakes that doggy bags were required.

“Wouldn't it be dreadful to live in a country where they didn't have tea?”
― Noël Coward

Being half-Chinese with not a drop of Anglo-Saxon blood in my veins, I’ve sometimes wondered what I am. But when I feel the craving for tea mid-afternoon and, even more importantly, when I have that first enormously regenerating sip, I know without a shadow of a doubt that I’m British.

And of course this is a lovely warming refreshing piece!

This brought back some lovely memories - thank you. My father worked as a railway clerk and we travelled everywhere by train too. This meant free or reduced fares so holidays were to distant places - Cornwall, Scotland, Wales, even the Channel Islands. This was in the 1950s so very adventurous in those days.