A Local Gem by Lynne Benton

Lacock is a small village in Wiltshire, which many people will recognise, even if they’ve not been there, as a favourite place for filming, especially by the BBC.  The village, with its timber-framed houses, has proved an ideal backdrop for scenes in “Cranford”, “Pride and Prejudice”, “Wolf Hall” and “Downton Abbey”, and for the film “Harry Potter and the Half-Blood Prince”.

In 1232 Lacock Abbey was built, initially as a nunnery, but it subsequently became a comfortable family home, and the village grew up beside it.  One of the Abbey’s most famous residents was William Henry Fox Talbot, who created the first ever photograph negative there in the nineteenth century and established Lacock as the birthplace of photography.  The Fox Talbot Museum contains changing exhibitions of the history of photography. 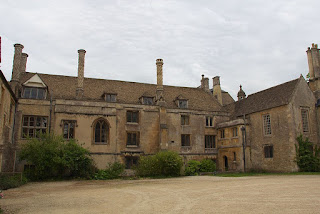 Because Lacock is so frequently used for filming of historical series, there are no double yellow lines in the village (though there are plenty of notices warning you not to park on the street!) and television aerials are kept to a minimum, even though nowadays they can be photoshopped out.  The whole village belongs to the National Trust, so that it retains its special character.

It is a wonderful place to visit, and I feel very lucky to live nearby.  Just walking round the village gives the feeling of having stepped back in time.
Posted by Lynne Benton at 02:30

How lovely to have this village on your doorstep, Lynne! Mind you, nearly everywhere in this country has some historical gems in it, even if not as atmospheric as this.