Because November was his birth month, (he was born on November 14th, 1912); because his life was bound up with Russia and its history; because I have just met up with relations I never knew I had (see PS) and because I think it's very interesting piece of oral history, I am taking the liberty of reprinting, just as he wrote it, my late husband's piece about his own father, Jack Geras. This appeared on normblog, on Jack's 100th birthday in 2012. We celebrated the occasion in Greek restaurant in East Finchley. It was fabulous lunch, and my younger daughter even brought her three-year-old son from a nearby nursery to celebrate with his great-grandfather. Jack, a Leftie his whole life, was thrilled to bits with his birthday card from the Queen and also (somewhat more surprisingly!) with one from Iain Duncan Smith.

I remember Jack as a very charming man; handsome, intelligent, stubborn, argumentative. His  Russian accent never left him and he spoke like a more educated version of Sergei from the Meerkat advertisements, which when I see them, always make me smile. I got on with him very well as I did with my mother-in-law,  Beryl, who'd been Jack's first wife. He wouldn't have been an easy chap to be married to, that I admit, but life would never have been dull.

I used to tell him he would never be forgiven by me for dumping a whole knapsack full of moonstones which he'd picked up while he and his fellow soldiers were in the Western Desert! The gemstones were, it seemed, too heavy to carry in that heat....

And here is  interesting but probably irrelevant fact: my  own daughters are married to two brothers, just like Jack's aunts. Also, take a note of Samuel Harris, mentioned in the piece below. My postscript will explain the connection I've recently  made with this branch of the family. 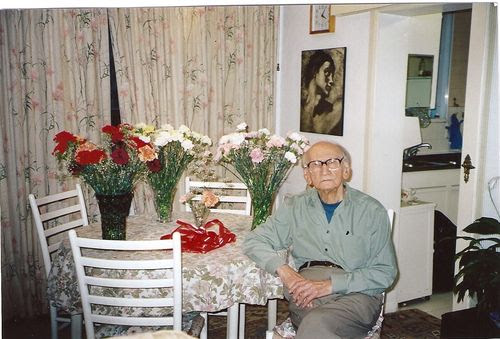 This post is a tribute to my father, who turns 100 today. The above picture of him was taken a few years ago, on an earlier birthday, though I don't remember which one.
In February 1993, I asked my dad to tell me something about his family history and I took notes on what he said. With his permission I am reproducing these notes below to mark the day. The conversation took place shortly after I began reading widely about the Holocaust, and that explains the nature of some of the information I elicited; I hadn't talked to him in any detail about the fate of his family before. 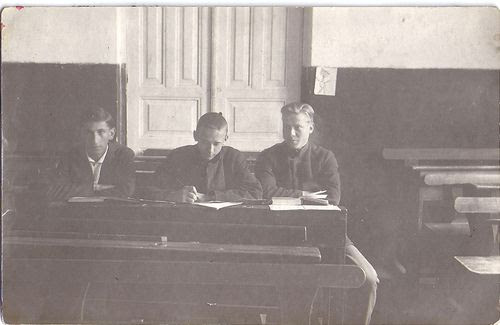 I shall now say a few more things. The above picture, with my dad on the left, has '1927' written in ink on the back of it; so he would have been 14 or 15. He has told me more than once that his mother sent him away to Africa in part so that he would avoid the problems encountered by his two politicized sisters. I've written something brief about this here and also about Dad's part in the war. Below is a picture of him in wartime. He is in the middle of the group. 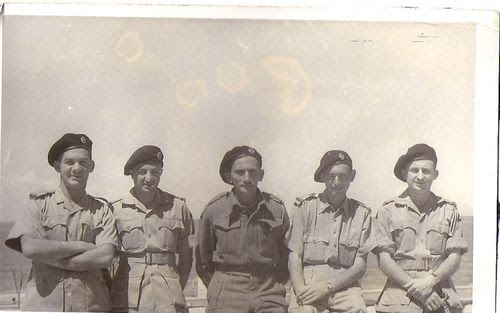 In March 2006, he met up with a guy who had been in the same squadron as he was and also called Jack - Jack Ferera. I described the circumstances that led to their meeting in this post; and here is a picture of the two of them. 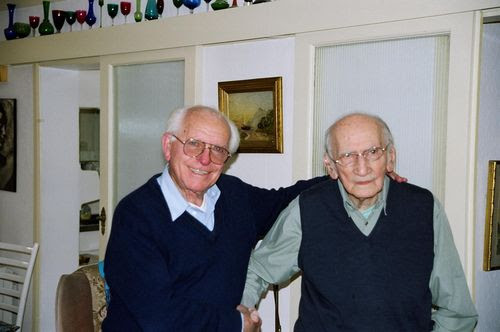 After the war my dad went into business in Bulawayo. He had a clothing factory for a period, then a button factory, and later one that produced foam rubber. His success in this last enterprise led in due course to a merger with Vitafoam in the UK. He and Mary and their two daughters, Etta and Nita, came to England in 1965, settling initially in Wilmslow. They then moved down to London at about the time of Dad's retirement in 1969 or 1970. He was admired and held in great respect by everyone he worked with.
Dad has also been, throughout, a good father to his children by both of his marriages - to Beryl, my mom, and then to Mary, who died in October 2004 - a man of great generosity, and with an indefatigable thirst for knowledge about political and economic affairs. I learned a lot from him, and we have talked politics (agreeing or disagreeing) from the time I first started to take an interest in the subject right up to today. Until his eyesight began to fail, he played a pretty damn good game of Bridge.
Here is a picture of Dad on my sister Sue's wedding day, with my sister El there, too, as Sue's bridesmaid. 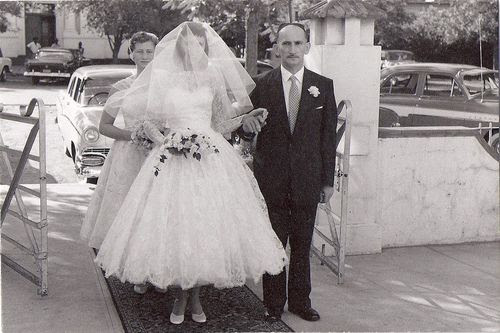 And here, finally, is one of him at home, at ease, in his pomp. 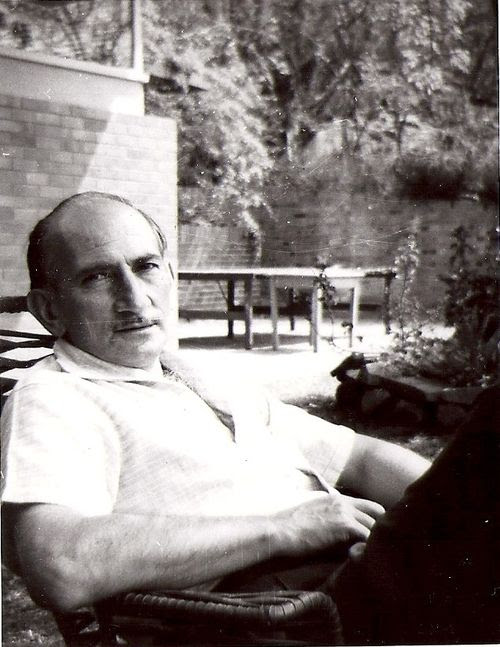 PS.    A few nights ago, I had a lovely meal here in Cambridge with Norm's second cousin, Professor Bill Harris and his wife, Professor Christine Holt. They live in Newnham and we spent a very enjoyable evening discussing the connections between us, and the serendipity of living in the same place at the same time. Bill and Christine are neuroscientists and when I came home and looked them up on Google, I was in total awe of their achievements. Bill is the grandson of Samuel, who has the added lustre of being the founder of Toronto's first delicatessen. Norm was the grandson of Meyer, one of the three brothers mentioned above. We were all brought into contact with one another recently through the good offices of Jeff Rose, from Canada, who searched out the Harris genealogy and discovered hidden Gerases. Jeff is making a comprehensive family tree and it will be many-branched, and various. The Canadian branch changed Geras to Harris, which was probably sensible, but I for my part, having married into this family, am very glad to be a more unusual (if often misspelt and mispronounced) Geras.
Posted by adele at 01:30

This post made a great impression on me when it was on normblog. How small it makes our problems look now!

Thanks, Adele, I shall return to the day with new determination.

Wonderful, Adele! Thankyou. And I remember with much gratitude Norm inviting me to contribute to his blog, several years ago now. x

What amazing lives! A fine reminder of the lovely Norm. I'm glad you stayed a Geras, rather than a Harris.

What an extraordinary family history. Thank you for this, Adele. (And I'm glad you stayed a Geras, too.)

I too think Geras is better than Harris. I've often wondered about the provenance of the name, though. I read this with fascination and sadness. History does such dreadful things to families. Jack sounds like an amazing man, so that adds admiration to my feelings.

I came to this late, but I'd like to join my thanks to those expressed above. What an extraordinarily moving account of one family's courage, suffering and survival. Thank you so much, Adele, for sharing this with us.