"Phone for the fish knives, Norman" by Mary Hoffman

I am a member of the forum Gransnet (think Mumsnet + 25 years) and far and away the most popular post recently has been "What kitchen gadget could you not do without?" Everyone had one and was keen to post pictures of their favourite small paring knife or whatever. It got me musing, because my mum had been a cook and taught me basic English cooking so thoroughly that I still use many of her techniques, even though she'd be amazed at the Indian, Thai, Chinese and even Italian food made in my kitchen today.

So when Vintage Kitchenalia by Emma Kay  (Amberley) arrived in the post, it brought back a few nice memories.

Everything in my mother's kitchen was made from scratch, a method I still tend to follow. Of course there was not much by way of ready-made food available in the 50s and 60s and a big supermarket shop was a concept way in the future. My mother shopped and cooked every day.

She bought lamb or beef from the butcher and put it through one of these: 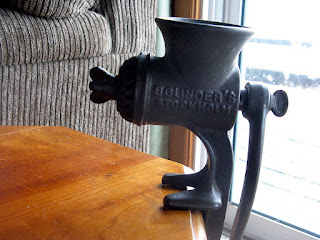 So a shepherd's pie was made from freshly minced meat. She made her own pastry, though her hand was not considered as cool as my Auntie Maggie's - a cool hand being the secret of light pastry. But her Yorkshire puddings were legendary. Oh what would she think of my recourse to Jus-Rol and Aunt Bessie?

But, great cook though she was, she didn't make her own bread, at least not that I can remember. I expect she did when she was "in service" (She gave up  work when she married, which was common in my parents' social class in 1932, the year of their wedding.) That's something that the many owners of bread-makers now do, even if they buy other processed food.

Another thing that is incontrovertibly better is domestic coffee-brewing. In my first family's home, the abominations of Camp and Bev liquid "coffee" were the norm, except on Saturdays when coffee was "perked" on the stove. 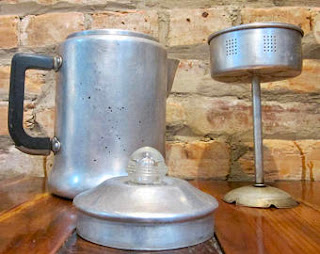 You put the ground coffee in the metal basket, water in the pot, lowered the basket into the pot and put the whole caboodle on to the gas flame on top of the cooker. The water boiled all up through the basket and fell down again through the ground coffee. You could watch it doing this through the glass knob at the top. At the beginning it smelled delicious but they left it on the gas far too long and the wonderful aroma deteriorated into something burnt and unpleasant.

Nevertheless, when we married, we asked for and got a Russell Hobbs electric percolator. And when it died after eighteen months, out of guarantee, like suckers we bought another one, which did the same. Years of experimenting with the different ways of making coffee followed in search of the perfect cup.

And after many experiments with drip methods, espresso machines, "Moka" stove top models and electric, we settled decades ago on the simple cafetière: 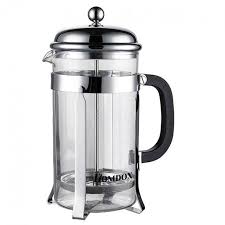 There's nothing to go wrong apart from breaking the glass goblet, which can be replaced.

Emma Kay is more focussed on tea but an earlier book by Bee Wilson, Consider the Fork (Particular Books 2012), devotes the last section of her book to the other popular hot beverage, beginning, "Coffee technology has become perplexing."

One thing is sure: what you display and use in your kitchen - which might be two different things - say a lot about you as an individual, your class, education, travel and commitment to such things as organic food, minimising of packaging etc. etc. It has become a cliché that people with expensive gadget-filled kitchens and shelves of glossy recipe books, often do know more than pop a frozen pizza in the microwave before pouring a glass of supermarket wine and settling down to watch yet another glamorous TV Chef or a competitive programme about baking.

Was it ever thus?

Emma Kay has chapters on storage, preparation, cookware, moulds, utensils and serving, which are all fascinating subjects in their own right. (Who now owns a mould or makes blancmange, jelly or "shape"?).

And a truly riveting list of 1929 of the equipment for a kitchen in a "household of about six persons." This was about the time my mum was a cook and I wonder if she had a tin pudding mould, a "netted mop," a cinder sifter and a knife-cleaning machine.

And what would such a list contain nearly 90 years later?

What strikes one most on reading Vintage Kitchenalia, is what hard work it all was. The section on "Dairy," for example, tells us about cream, cheese and butter-making tools and even talks about making your own ice-cream.

Of course the invention of refrigeration revolutionised storage and cooking of food. I remember own first fridge entering the kitchen. Before that, food sat in our larder, in a meat-safe or a china cheese wedge.  And I remember in the 70s going to the house of a old schoolfriend who had a freezer and thinking "this will never catch on."

Now I revel in my American-style fridge freezer, have an old Bosch in the garage and even another small freezer there. But I still crave a larder like my mothers, with cool marble shelves lined with jars of jam, marmalade, chutney and pickled onions, all home made. (I do make the preserves but they live in the garage too).

I particularly enjoy Emma Kay's chapter on utensils. I do have a wire whisk, but for egg whites and cream, do prefer this: 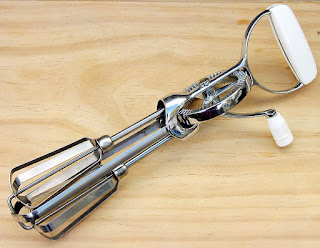 And although I have a food processor, I still use a pestle and mortar for spices: 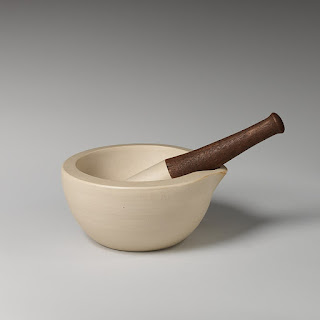 In fact there would be several items in my kitchen that my mother would recognise.

But can YOU recognise these? Answers in the comments below. 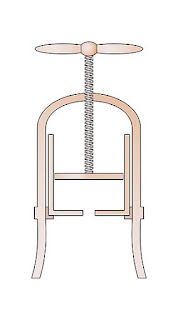 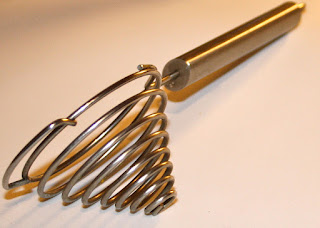 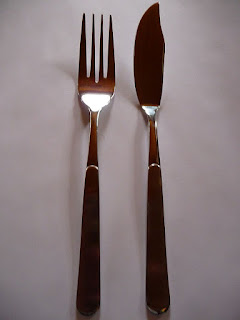 And do you know why John Betjeman put fish knives in his 1958 poem "How to get on in society"?


Finally, do share your own indispensable kitchen gadget, with a photo.


Food tastes best when you eat it with your own spoon. Danish Proverb 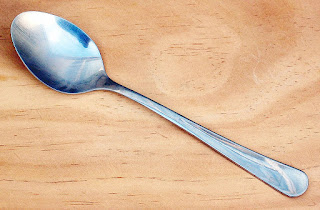 The first item looks like a meat press - maybe for home-made burgers? I think my parents used to have one rusting away in a cupboard, but I never saw it used. Is the second item anything to do with holding and boiling an egg? Again it seems familiar, probably because my parents were great hoarders.


My parents have still got mincer like the top one, except that it attaches to the table with a rubber seal, not a screw.

I would love a pantry.

I *believe* that fish-knives were considered to be a sign of the noveau riche or aspirational middle class. If you were properly posh you would have inherited your cutlery and wouldn't have them as they are a modern invention, but I am nit sure if that's correct.

When emptying my mother house the jelly mold went! but it was a 70's tupperware bunny! My mum refused to not get new things, we had a freezer in the 70's and bought butcher made sausages, but I remember when she started to make her own chips and had a chipping machine (plastic oh she did love plastic) now long gone, and frozen beef burgers! then came the 80's and Tilly Floss as my dad always misnamed her (Delia Smith) when he would make dinner and use every tool and equipment in the kitchen leaving a mass of clearing up and expect my mum to be so grateful for him cooking! I learned to smile and keep your temper from her! from knife rests and napkin rings through fish knives and meat platters to electronic tin openers and automatically sharping holder for a very sharp knife! Though when granny lived with us she had a coffee pot like that which she would boil until it stank the house out before drinking it! my mum had an early coffee maker with paper filter :-) may have been the final straw that got granny her own flat! though somewhere I do have a hand mincer!

I can't remember the ins and outs but weren't fish knives and forks something to do with a reaction between the fish and the metal of the cutlery ? If you were rich enough then your everyday knives and forks were silver and so did not react anyway. If you were poor then you had to put up with this but the middle classes could afford special cutlery for fish, but not silver for every day. Something like that anyway !

I've inherited 2 sets of fish knives but, since they have bone handles and have to be hand washed, they don't see the light of day.

Enjoyed reading about all the kitchen items in this post. (I spotted a processing and/or pressure cooker device, an egg separator, and a fish knife and fork.)

I remember a cream-making device. It was about the same proportions as that top-of-the-stove coffee maker but maybe a little larger. The lower section was a sturdy glass container while the turquoise plastic "cup" at the top included a pump action nozzle and metal lever.

To make the cream, you mixed unsalted melted butter(cooled a little)with an amount of milk in the glass section, and then you pushed the lever up and down continually until the mixture turned into cream. I think it was about the time that refrigeration was coming in - and took ages if you nwated cream on your sliced, tinned peaches!