Giving thanks for Olives, by Carol Drinkwater 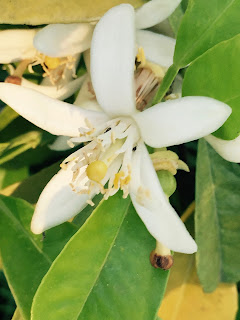 I am trying to keep away from the computer at present to avoid this most obnoxious, recent invasion to Europe, "Black Friday".  Instead, I have been out on the land, working in the sunshine harvesting our olives.  I know that I have written at length in my series of Olive Farm books, particularly the two travel books THE OLIVE ROUTE and THE OLIVE TREE about olive farming, its culture and its history. Still, every year when I return to the land to pick the fruits - a backbreaking task but one that I enjoy enormously - I am yet again enthused by the subject. I am reminded of how rewarding and historically rich this activity is and it fills me with a real sense of humility and I am grateful to Mother Nature for her gifts. 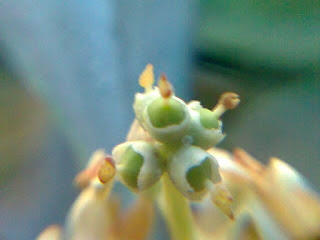 Baby olives growing from the flower (May) 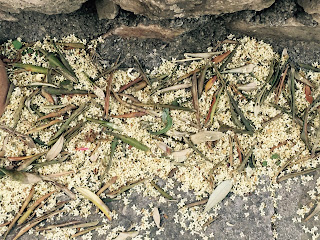 The shedding of the blossoms (May)

We pick by hand, using no machines. We don't even beat the fruits to the netted earth because the sticks bruise the fruit's skin, causing it to split, the oil to weep and thus the fruit begins to oxidise. Oxidation augments the level of acid in the pressed olive oil. Olive oil that has an oleic acid level of higher than 0.8% cannot be sold as Extra Virgin. (Some territories allow the acid level to reach 1% before the oil loses it Extra Virgin label. In Europe, the regulations are more stringent). Once the oil has lost its Extra Virgin quality, it loses many of its natural vitamins and minerals and, most importantly, it lacks the antioxidants that make extra-virgin olive oil such a gift to our kitchens and our good health. These include protection again heart disease, lowering of cholesterol levels, protection against type II diabetes as well as several cancers.

Recently-pressed unrefined olive oil has a greener or golden hue whereas refined olive oil will be lighter in colour and lack any residue of the flesh of pressed fruits. Because olive oil, unlike wine, does not have a long shelf life, it is important to consume it young. 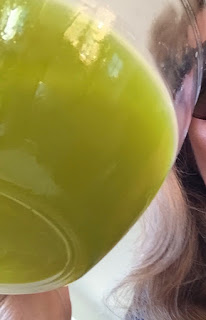 I think it is because we have stayed faithful to the time-honoured methods of farming that I find the harvesting and visits to the mill so rewarding and rejuvenating. I know that I am contributing to a ritual that is almost as ancient as farming itself. Of course, we press our olives at a modern mill. Today, it is very rare to find mills that press using the hemp mats (known as les scortins in French) stacked high and squeezed in a screw press. This process has been overtaken by more efficient and more hygienic systems.
These photos show the old-fashioned screw press system at work. This method was, until the last century, used everywhere around the Mediterranean. 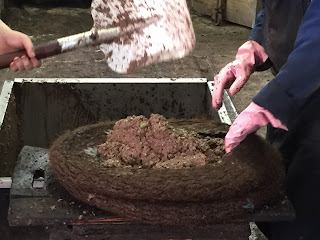 Packing the hemp mat with olive paste. The paste is the result of crushing the the fruits including its stone with a gigantic revolving stone. 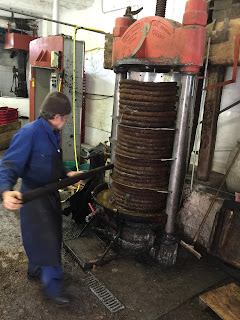 Stacking the scortins into the screw press 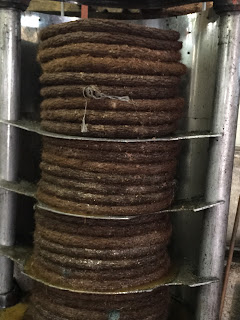 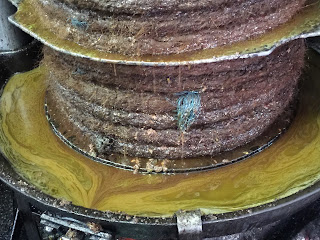 As the screw presses its weight down onto the mats, the oil is squeezed out and runs into a steel plate. At this stage, as you can see, it is oil mixed with water. The liquids are then separated so what you are left with is pure olive oil.
By the way, this ancient mill is still operating not far from where we live in the south of France.

Here is a photograph of some of our olives being unloaded at the more modern mill we use, which is in Speracedes in the hills behind Cannes. 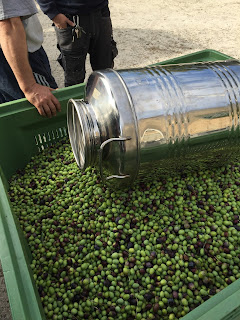 As you can see we try to pick the fruits when they are green rather than dark purple or black. It gives a more peppery taste to the oil. Also, because we are organic, the sooner the fruits are off the trees the less chance the fly has to attack the drupes during her autumn breeding session. 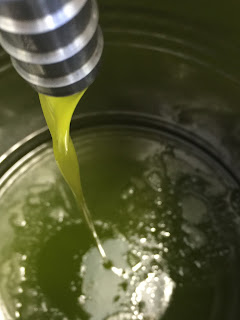 See how green and viscosy our oil is. Its extra virgin rating is between 0.5% and 0.6%.

I spent seventeen months travelling solo around the Mediterranean in search of the history, secrets and cultures of the olive tree and its cultivation. I wanted to know where it all began. No one knows precisely who first picked a drupe from off an olive tree or wild bush, perhaps, back then, and decided to experiment with its oil. I found no definitive answers but I did manage to trace olive routes, olive developments from the fourth to fifth millennium BC forwards. I discovered two groves of 6,000 year old olive trees - each grove, boasting about a dozen remaining trees, still delivering their annual fruits and still being pressed into fine extra-virgin olive oil.

Mesopotamia and the regions known today as Syria, Lebanon, Palestine, Isra
el, Iraq were, as far as I have discovered, at the heart of the earliest olive farming operations. It's a tragedy that so many of the clues I found that date olive cultivation back to at least 5,000 BC have been destroyed in the recent wars.

Here are one or two of my memories. Thankfully, saved. 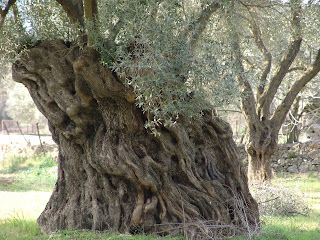 An ancient olive tree in Greece 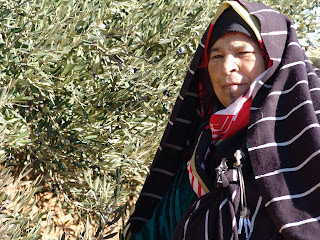 Libya. It's the women who harvest and prune the trees in north Africa. 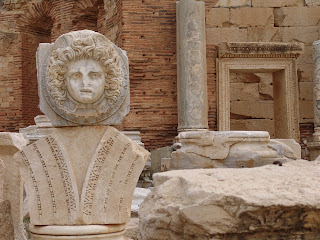 In our Olive Route films, we visit Testaccio in Rome which is a hill created from pottery shards, the broken remains of the amphorae used by the Romans to transport their oil and wine. 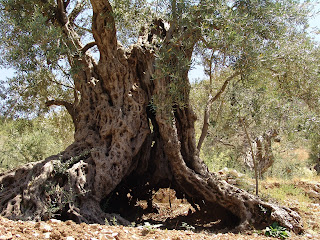 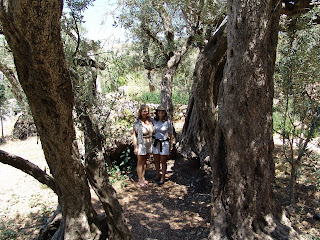 These two photos were taken in Becheleah in Lebanon. These trees have been radiocarbon dated at over 6,000 years old. In the second photograph, I am standing with an Iranian friend, Soheila, in an olive tree where, over millennia, its centre has died off and hollowed out. It survives and thrives by producing new exterior shoots from its roots. These are the trunks that are encircling us. 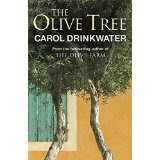 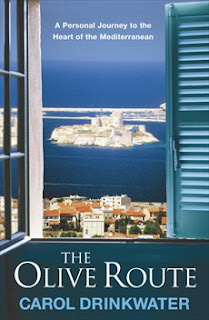 These two travel books were based on my experiences of those seventeen months travelling round the Mediterranean. The books, in turn, became the inspiration for a five-film, high-definition documentary television series narrated and written by me.
The films were shot round the Mediterranean although, due to the Arab Spring uprisings and the Syrian war we were not able to shoot everywhere I travelled when I was alone researching for the books.
If you are interested in buying the films, please contact me at olivefarmbooks@gmail.com

I am enjoying your book "The Olive Farm" so much, I told my mom about it. For thirteen years she lived on her barge in a canal in Paris. So she is missing France. But we both want to experience the South of France. Your book brings it to life in such a sensuous way--the summer honey light and the mother of pearl winter sun; the herbal fragrance and the perfumed air; the flavors, briney olives, your lemon-pepper olive oil, the cheese, tomatoes... the sounds of family and animals enjoying your beautiful villa.

Your words are carrying me there.

One day I would love to spend time on an olive farm. I, too, have a thing for olive trees, as their gnarly ancient trunks and branches fascinated me as a child traveling the world-Spain, Morocco, Greece, Italy...-with my family. That these beauties of nature provide something as amazing and healthful as olive oil and their delicious fruit, is simply incredible.

Thank you for sharing your wonderful experiences. Now I'll look forward to all of your other books and look for that documentary.