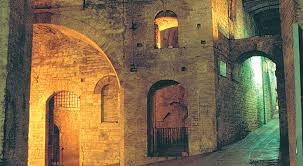 Last month I revisited Perugia, where I studied Italian in my teens. At lunchtime, when I finished my classes at the University for Foreigners, I used to make my way up the steep medieval streets to a mysterious place called the Rocca Paolina. This was an enigmatic, subterranean cavelike labyrinth on the edge of the city and I was usually alone there. It appealed to my adolescent love of solitude and the story attached to it fascinated me.

In the thirteenth and fourteenth centuries a family of condottieri called the Baglioni dominated Perugia. They built palaces and towers, slaughtered the rival Oddi family and eventually turned on one another. Their crimes make the mafia look quite benign. In 1500, for example, there was a family celebration from hell known as the Red Wedding:

“Poorer or bastard members of the Baglioni (led by Grifonetto and Filippo di Braccio, bastard) turned on the leading clique, killing some of them including Guido and Astorre,(the bridegroom) whose heart was cut out and symbolically bitten by Filippo. In all, about 200 died...”
(From Early Modern Italy - A Social History by Christopher Black).

As always in Renaissance history, brutal crimes, religious sentiment and sensitivity to art co-existed, often in the same person; Perugia’s most famous artist, Pietro Vannucci (Perugino), taught Raphael. In memory of the tragic death of her son Grifonetto, Atalanta Baglioni commissioned Raphael to paint a Deposition where the characters of that terrible event were to be depicted. In his 1507 Entombment, now in the Galleria Borghese in Rome, Atalanta is portrayed as the heartbroken Madonna, Grifonetto is the one bearing the dead Christ and Zenobia, Grifonetto’s wife, is represented as Mary Magdalen. 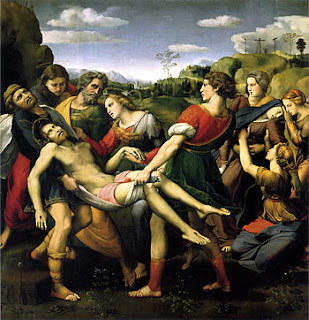 Gianpaolo Baglioni escaped the slaughter and ruled over Perugia for many years. In an age when Popes were formidable and violent politicians, Perugia’s arrogance and independence was considered intolerable. Gianpaolo was as ferocious as the rest of his family and the Popes were afraid of his ambition. So Leo X lured him to Rome, promising him safety; Gianpolo came, and was tortured and beheaded.

His sons and nephews continued to fight and murder one another and the Farnese Pope, Paul III, visited Perugia. All the nuns in the city had to queue up and kiss his feet. In 1538, when the Pope raised salt tax, Perugians revolted against this and were excommunicated. Paul III then sent an enormous army of mercenaries and Spaniards and handed over the city to the Preservers of Ecclesiastical Obedience.

Paul 111 decided to humiliate and control the proud city of Perugia by building a massive fortress, the Rocca Paolina, as a symbol of his power. Over a hundred houses, as well as all the palaces and towers of the Baglioni, churches and monasteries were partially demolished and used as building materials for his fortress. Instead of destroying the houses entirely, the Pope’s architect, Sangallo, left the lower part of the houses and the streets to create the phantom underground galleries that are still so intriguing.

In this nineteenth century painting of Perugia by Giuseppe Rossi you can see that the massive fortress loomed over the entire city. In 1859, during the Risorgimento, Perugia again rebelled against Pope Pius IX, who sent 2000 Swiss Guards ( wearing those cute uniforms you see in the Vatican). They looted the city and butchered people in the street. With the unification of Italy the following year the new king of Italy, Victor Emanuel 11, finally liberated the city from the Popes. The fortress was torn down by the citizens of Perugia, using dynamite and their bare hands. Anthony Trollope, watching the demolition of the Rocca Paolina, wrote that ‘few buildings have been laden with a heavier amount of long-accumulated hatred’. 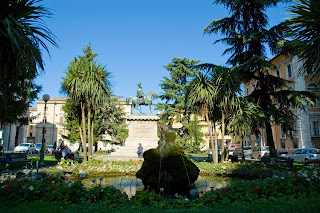 The Prefecture Palace and the pleasant Carducci Gardens were built on top of of the Rocca Paolina, like a lid on Perugia’s gory and turbulent history. On a clear day in October we looked out over the balustrade at the end of the gardens to see the stunning golden landscape of Umbria, as far as Assisi.

I knew that the ruins where I used to wander long ago had been cleaned up and that escalators had been installed to help people in this steepest of hill cities to reach different levels. Italian engineering never ceases to amaze me and in Perugia modern technology bridges different periods of history, as well as being extremely practical. I was afraid the Rocca Paolina would have lost its unique and melancholy atmosphere and was delighted to find an imaginative video installation down there. Without words, it uses Bach’s music and expresses time as waves, floating clouds and kaleidoscopic mosaics; a griffin, Perugia’s symbol, flies through the film, swooping through shattered buildings and brutal wars to some kind of triumph. Viewed in the underworld, projected onto an ancient wall through a medieval archway, it’s impressive. 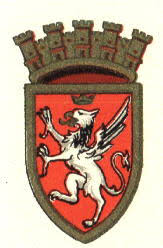 Miranda, how I envy your opportunity to have studied in Italy. I spent some time during my twenties in Rome and also travelling to various northern Italian cities. Since, I have visited the country regularly. Also for my The Olive Route books and films. I agree Italian engineering never ceases to me amaze me too. I enjoyed your post, thank you.

Wow! I had no idea of how violent Perugia's history was. Thank you for this.

Carol, I admire the way you've made a life in France. In my twenties I lived in Rome for 4 years and then decided to return to London. Last month Italy was so stunningly beautiful that it was hard to leave and return to Brexit- obsessed England. I'm writing a novel now about that tension between two cultures - I suppose you never know if you've made the right choice.