Of Ships and Churches

Churches can be a fascinating reflection of their local community and history. I have grown up visiting churches in the North of Jutland (Denmark) and taking for granted that in each church, there will be at least one model ship suspended from the ceiling.

In a community where almost every family made their living from the sea, mainly from fishing, the sea and its dangers were part of life. In Skagen, fishing was done from the beach until the harbour was built in 1904. On the west coast, fishing from the beach continued for much longer and there are still small communities like Lønstrup, where fishing boats are still winched on and off the beach today.

The North Sea is big and dangerous and without modern navigation tools, engines or weather forecasting, many persished at sea. This was the same for fishing communities the world over, of course. But here it has been integrated into the churches. The ships are there as a reminder that every family has lost members to the sea, that many may have loved ones at sea even as some sit in church. Perhaps they are also a form of thanksgiving - a reminder that the sea provides food and - for some - prosperity.
This is Skagen's Kirke: 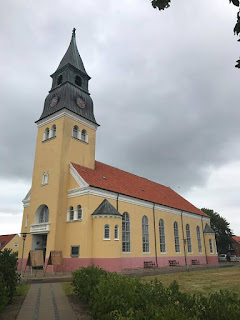 As one might expect of such a grand church (by local standards) it has a sophisticated interior. And some smart ships. Here is one of them: 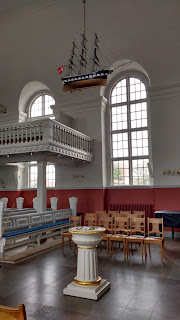 But the ships are in all the coastal churches (and right up in the north, almost everywhere is on the coast). This church is in the middle of a dune, grass and farmland landscape, not far from the west coast. It has an interesting history of its own; it stands alone because the village around it had to be abandoned during a bad spell of shifting sand. But the church endures, solitary and charming. It underwent major restoration in 1931 and is now on a busy summer route to the beach so, for a few weeks a year, it has plenty of visitors:

The interior is low ceilinged and beamed and painted the traditional white. And of course, there are beautiful model ships suspended down the middle of the church: 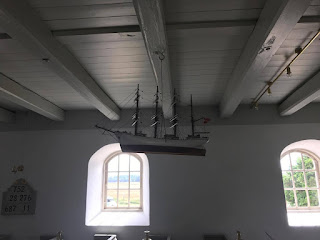 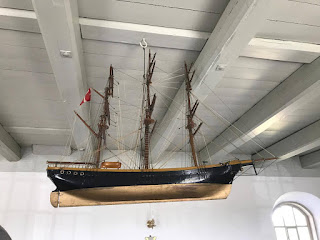 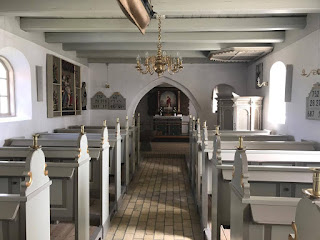 It is impossible not to know you are in a coastal community when you sit in the churches here and look around. (For copyright : all photos are my own, taken summer 2017) 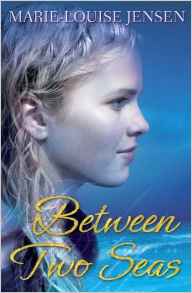 What a lovely idea the ships are! Except I'm thinking about dusting them...

Haha, ah well, perhaps it provides someone with a job :)

Lovely post - and beautiful pictures. Thinking about that hymn: Eternal Father, strong to save...

Lovely! have seen similar model ships in a church on an island off La Rochelle, and also in one in the Cardiff dockland area - that whole church looks very like these Danish ones.