In October I went on a guided walk put on by the National Trust at Coleshill in Oxfordshire. The house itself no longer exists, but during the Second World War, Coleshill was the top-secret General Headquarters (GHQ) of Churchill's 'secret army' .

This was not a regular army, it was one made up of ordinary civilians who had volunteered to serve as Britain’s last line of defence in the event of a Nazi invasion. 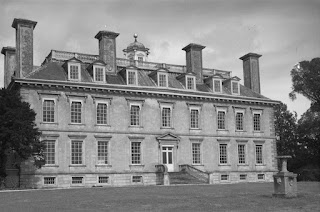 The secret army was formed in the dark days after the fall of France and the ‘miracle’ of Dunkirk. Most of the British Expeditionary Force had been saved, but the BEF had lost 68,000 soldiers during the French campaign and nearly all of its tanks, vehicles and equipment had been abandoned in France. German troops were massed a mere twenty-three miles away across the English Channel and Britain steeled itself for German invasion. 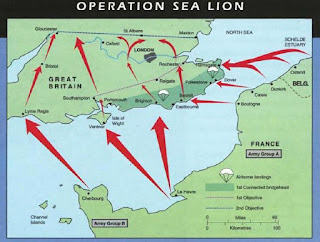 The Battle of Britain had not yet begun and the fate of Britain hung in the balance. Hitler had conceived 'Operation Sea Lion', by which he intended to land more than a quarter of a million troops, 60,000 horses, up to 40,000 motor vehicles and 650 tanks on British shores. His aim was to eliminate the British homeland as a base for operations against Germany. 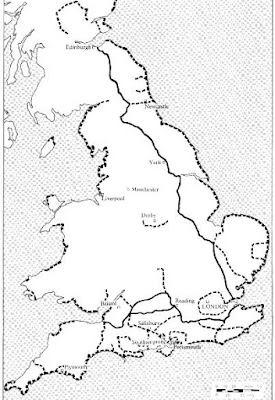 Defensive measures against invasion were in place, such as barbed wire, anti-tank measures and mines on beaches.

The country was divided up into defensive sectors by ‘stop lines’, continuous anti-tank obstacles – natural or man-made – which would block or hinder the progress of German armoured columns and allow an easier counter-attack by British defending forces.

The stop lines were backed up with minefields, concrete pillboxes housing riflemen and machine gun emplacements.

It is sobering to read Home Forces Operation Instruction No.3 (submitted to the War Cabinet on 25 June 1940), which states: “This system of stops and strong-points will prevent the enemy from running riot and tearing the guts out of the country as had happened in France and Belgium.”

Such measures were designed to assist regular soldiers and, at a pinch, the Home Guard, to defend the country. But what if the impossible happened, and the German invasion was successful, or even partially successful? How were the British people supposed to defend their island?

In 1940 Britain had an advantage over the nations in Europe that had fallen so quickly to the German blitzkrieg - it had time to create a resistance movement in advance of an invasion. 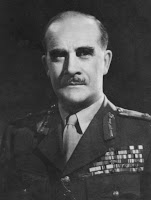 Colonel Colin Gubbins, a British Intelligence Officer who was later the head of the Special Operations Executive (SOE), was asked to put in place a network of British resistance fighters to operate a resistance movement behind enemy lines. It was known by the deliberately vague title of Auxiliary Units and was comprised of civilian men and women (known as Auxiliers), who were usually in reserved occupations, but who were expected in the event of German invasion to engage in a guerrilla war. They would blow up bridges and trains, report on possible fifth column activity and discourage collaboration with the Germans.
These were the men and women of Churchill’s secret army, and their training in sabotage and mayhem was given at Coleshill House.


There were two branches of the Auxiliary Units. The 4,000 ‘Special Duties’ Auxiliers were trained to be spies in their own country, to be the ‘eyes and ears’ of the organisation. They were people whose work allowed relatively free movement, such as doctors, district nurses and vicars.

In the event of invasion they were expected to continue their normal lives, but to gain and communicate intelligence about the deployment of enemy forces. They learned how to identify vehicles, high-ranking officers and military units and objectives. Once they had gathered intelligence they were to prepare a short report and deposit it in a secret ‘letter box’ or 'dead letter drop'.

These letter boxes were in unusual places, such as under rocks, in hollowed bricks or gate-posts or in holes in trees. At Coleshill I was shown examples of 'dead letter boxes'. 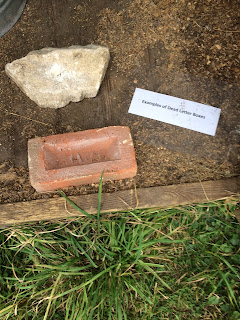 The reports would be collected by runners and taken to one of more than 200 civilian wireless operators, who would use secret radio transmitters to transmit the information to military headquarters.
These radio transmitter might be hidden under the outside toilet on a farm, or in a secret compartment in a chicken shed. One such wireless, manned by the local vicar, was hidden under his church's altar; its antenna cable ran up the side of the bell tower.
At Coleshill they had a reproduction secret wireless transmitter to show us. The dummy priest, who is a secret wireless operator, is secreted in a little room behind the far wall of this chicken shed. 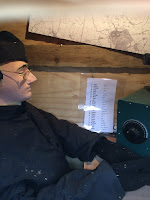 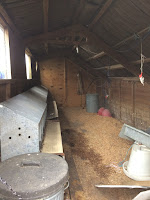 Auxiliary Unit Patrols were the second branch of the Auxiliers. They were the combat units who had been highly trained in guerrilla tactics. Each patrol was made up of a small group of six to eight men who operated on a ‘need to know’ basis as a self-contained cell, so that the members of one unit did not know the identity of any members of other units in their area.
They were instructed to cause maximum disruption to the invading German forces by engaging in sabotage operations behind enemy lines, specifically to deny mobility to the attacker and to disrupt supply lines. Their prime targets were aircraft, fuel dumps, railway lines and depots, together with senior German officers. 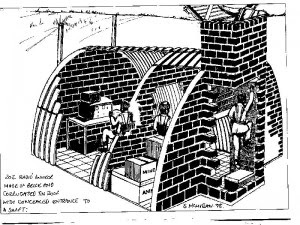 The Patrols were provided with hideouts, known as operational bases (OBs) or 'funk holes', which were built in local woodland and stocked with plastic explosives, incendiary devices and ammunition, and with enough food to last for two weeks.
Each OB had a camouflaged entrance and an emergency escape tunnel.
The replica 'funk hole' at Coleshill is hidden beneath the soil, invisible until the top is lifted to reveal the entrance and a 30 foot ladder. 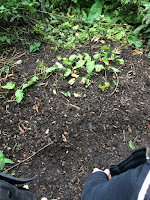 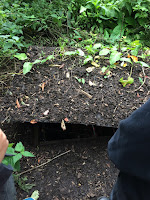 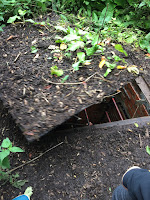 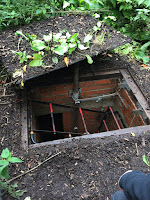 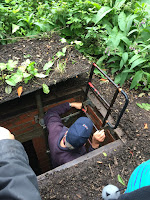 Inside, the OB was fairly commodious, with four bunks (pulled up against the wall when not in use), a separate compartment for an Elsan toilet, a kitchen area and storage for tinned food and explosives. 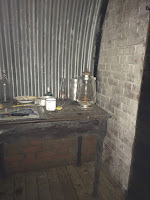 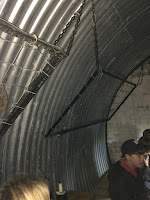 A real OB exists in Sussex, and is still in pretty good shape after 70-odd years. 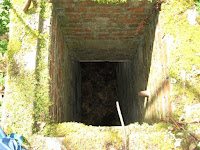 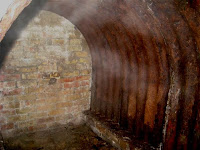 Each OB had an emergency escape tunnel, leading to an exit some distance away. 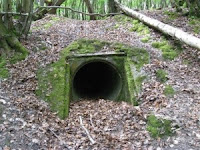 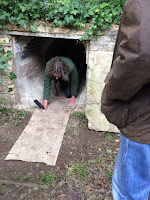 This is an example of a 'how to blow up things' in a secret booklet given to Auxiliers, disguised as a Countryman's Diary. 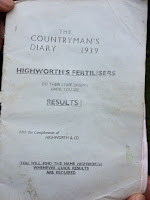 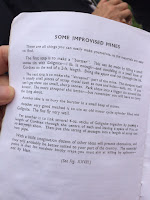 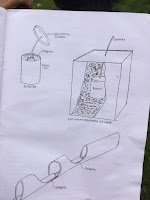 As a sober note to such 'boys' own' adventures, it was accepted that, in the event of German invasion, the life expectancy of an Auxilier was only 10-14 days. The men anticipated being shot if captured. Many were determined not to be taken alive.

The Auxilier Unit Patrols were comprised of part-time volunteers, often recruited from the Home Guard. Former Boy Scouts, gamekeepers, foresters, hikers and mountaineers were preferred, because they knew their local area and had good survival skills. Game keepers were prized recruits as they were used to moving quietly through the countryside and they were used to killing things. All had to sign the Official Secrets Act and not even their families knew what they were trained for. As cover for their activities, they were given Home Guard uniforms.

Auxiliary Unit Patrol recruits were trained in secret at Coleshill, usually on a weekend so as to avoid interfering with their other work. Recruits were asked to check in at Highworth Post Office, where they were vetted by the postmistress, Mabel Stranks. After screening them she telephoned ‘Highworth 85’. The recruits were then blindfolded and taken by army transport on a circuitous route to Coleshill House. There they were taught close combat, self-defence, use of fire-arms, map reading, stealth, night fighting and camouflage techniques, and training in explosives, which were to be used for attacking enemy transport and supply lines.
The men were also issued with sub-machine guns, hand guns and the deadly Fairbairn Sykes double-edged dagger.

The services of the Auxiliers were never needed in Britain. In September 1940, after defeat in the Battle of Britain and fearing the might of the British navy, Hitler postponed his invasion. Instead he turned his forces towards the Soviet Union. Operation Sea Lion was officially cancelled in March 1942.
What of the Auxiliers? They were stood down  in late 1944, when the tide of war had moved decisively in favour of the allies. Most of them slipped back quietly into their former lives. However, one group was determined to use the skills they had been trained in at Coleshill. These men were parachuted behind enemy lines for Operation Bullbasket in July 1944, but were captured in Verriers Forest near Poitiers and killed by lethal injection. 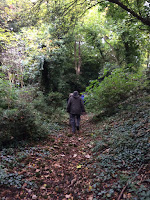 The Auxiliary Units had no official recognition. It is only now that we are aware of the desperate measures taken to prepare Britain for the expected invasion, and of the work of this ‘secret army.’
As I walked through the countryside following our guide, enjoying the beauty of the autumn colours, I thought about what had motivated those ordinary men and women in 1940 to volunteer for this secret army. 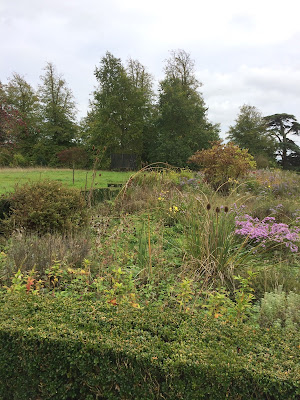 Coleshill House burned down in 1952. A few years ago a small hedge was planted to mark the perimeter of the house and inside it were planted wildflowers and shrubs.
I visited on a day of sunshine and shadow, when the flowers were in their last flush but still bright and beautiful. It is fitting, perhaps, that the headquarters of such a secret and chilling organisation should now be open to the sky and enclosing only flowers.


Additional information and photographs: http://www.pillbox-study-group.org.uk/
Posted by Deborah Burrows at 00:19

It's easy to forget how close we were to invasion. I think it must have been a unit of this army that trained near where I live, in Ebbor Gorge near Wells in Somerset. Thank you, Deborah.