Guy Fawkes - and an awful lot of light bulbs... By Sue Purkiss

We've just had some friends staying, and as we drove one day from Cheddar to Wells, Rosie noticed a sign warning that roads would be closed in a week's time because of the carnival.

"What an odd time of year for a carnival!" she said. "What kind of carnival is it?"

"Oh," we said, with a touch of understatement. "The carnival's quite a big thing in Somerset..."

Here, to explain, is a post I wrote a few years ago. For some reason, the carnivals are a week later than usual - so if you want to catch one, you still can.)

You've probably all heard of the Carnival of Venice. But down in Somerset, we have a carnival of our own, and this is its season. It starts in Bridgwater, close to the 5th November, and then it travels in succession to Weston Super Mare, North Petherton, Burnham on Sea, Shepton Mallet, Wells and Glastonbury. For the evening of carnival, the town centre is closed, and no matter what the weather, the route is lined with crowds of people, watching as upwards of fifty brilliantly lit carts (called 'floats' in other places) roll through the streets, drawn by tractors. Each cart has a theme, which is illustrated by performers - some have a tableau, but most have dancers, all gorgeously costumed and made-up (Strictly, eat your heart out!). The music's loud and the lights are dazzling - a cart may have 22,000 light bulbs. 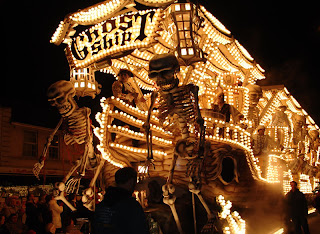 Perhaps it all sounds a touch excessive - but this is a tradition which began over 500 years ago, deeply rooted and much treasured. It began when James 1 ordered his subjects to celebrate the discovery and punishment of Guy Fawkes and his fellow conspirators by lighting bonfires all over the land. The towns of the south west, staunchly protestant, set to with alacrity. In Bridgwater, they built a huge bonfire right in the centre of town. To start off with it was built out of an old wooden ship (Bridgwater is a port), with 100 tar barrels to get the flames leaping. (Eventually they ran out of ships and had to collect wood, like everyone else.) There were special fireworks called squibs, attached to long sticks, and a hundred 'squibbers' stood in line in the High Street and let their squibs off as a triumphant finale.

The townspeople streamed through the town to the bonfire, many of them dressed in masks and costumes. Effigies of Guy Fawkes, the Pope, and anyone who'd managed to get on the wrong side of the Bridgie populace were slung onto the fire, and there was merry-making till the early hours. Eventually, in 1880, the merriment tipped over into a riot. The town dignitaries cogitated. There was no question of banning the carnival: instead, they formed a committee (what else?), which decided that henceforth there had better be a procession, which would wind through the town so that everyone would be able to see it, and the high jinks would not be concentrated in one small area. 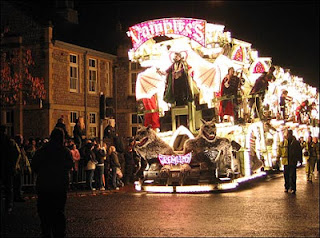 And so began the formation of the carnival clubs, rejoicing in names such as the Masqueraders and the Gremlins. Each cart costs thousands of pounds, much of which is raised from sponsorship. The clubs spend the whole year raising money and building the cart; to do this they need costume makers, make-up artists, electricians, mechanics, tractor drivers, artists, painters, carpenters, sound engineers and more besides. Friendships are formed, marriages are made (and possibly broken); whole lives are lived within the ambit of the club. Thousands and thousands of pounds are raised for charity. After the carnival, the floats are dismantled and it all begins again - as you travel through Somerset, you may see the remnants: a giraffe grazes in a field near Glastonbury, a camel and a dinosaur gaze at each other from opposite sides of the M5.

In 1685, the Bridgie people were still staunchly protestant, as were many others in the south west. But now, unfortunately, the king, James 11, was not. The people of Bridgwater, along with many others from the south west, took part in the Monmouth Rebellion - also known as the Pitchfork Rebellion - and they paid a severe price for it at the Battle of Sedgemoor and in its aftermath. Presumably during the three short years of James' reign, the great bonfire was not lit on the Cornhill: and presumably when James was deposed and William and Mary came to the throne, the merrymaking was even more heartfelt and more riotous than before.

But perhaps Bridgwater's finest hour came in 1938, after Britain and France had shamefully let down Czechoslovakia by signing an agreement at Munich which allowed Hitler to invade unopposed and take the Sudetenland. Shortly afterwards, there was a by-election in the town, and it was won by an independent candidate, a journalist named Vernon Bartlett (left) who fought the election on a single platform: opposing the Munich Agreement, standing up to Fascism and defending Czechoslovakia. His victory sent a clear message to the coalition government; once again, Bridgwater had stood up for what it believed in. During the war, the carnival did not take place, but one William Henry Edwin Lockyer walked the route each year. The tradition was kept alive, and it continues.

Love how un-homogenised this is! Thanks, Sue!

How lovely, Sue! I saw the parades at Lewes one year. Now I'd love to see your carnival too!

It's quite a sight!

Looks really exciting! I have a dim memory of reading that James 2nd banned Guy Fawkes bonfires. But considering Fawkes wanted to blow up his grandfather.. Anyone know about that?

Having grown up just outside Wells I forget that not everywhere has this kind of carnival.

I know a lot of people who have moved away but still come back evey year for the carnival.

This place is absolutely gorgeous, beautiful and stunning. Even though a few halls are equally appealing and fascinating in their decor, food and aesthetics, I'm tempted to still give this venue NYC a slight edge.