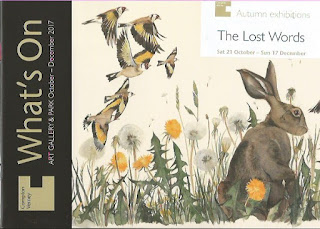 ‘Once upon a time, words began to vanish. They disappeared so quietly that almost no-one noticed. The words were those that children used to name the natural world around them: acorn, adder, bluebell, bramble, conkers – gone! Fern, heather, kingfisher, otter raven, willow, wren… all of them gone! The words are becoming lost: no longer vivid in children’s voices, no longer alive in their stories.’

It is this perceived loss that is so eloquently addressed in the current exhibition at Compton Verney by writer, Robert Macfarlane, and artist, Jackie Morris. In this magnificent exhibition and in the wonderful book that they have produced, they draw attention to the danger that these words might be lost to children forever and they endeavour to make good the damage, conjuring back these lost words by the magic of their painting and poetry. 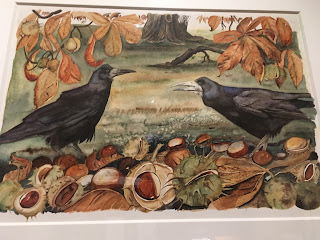 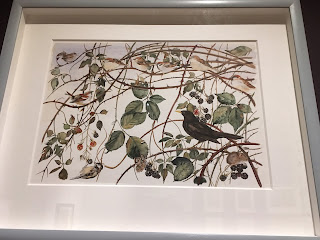 I grew up in the 1950s  and  was lucky enough to be one of the last generation to enjoy a ‘wild childhood’, free to roam woods and parks looking for conkers, pick blackberries in the hedgerows, wade in brooks and ponds looking for newts. I was intensely aware of the passing seasons and what they would bring: the conkers and turning leaves of autumn, bryony beading the hedgerow; the prospect of snow in winter, watching robins and bluetits feed in the garden; snowdrops, celandine and coltsfoot promising spring and the summer to come. We were free to be out all day, only returning when hunger called us home. We were in tune with the world around us: the plants, trees, birds, animals. We took it for granted. I saw ‘the elm tree bole in tiny leaf’ and knew what the poet meant, but that life has gone with the elm trees themselves.

Today’s children rarely go out unsupervised, some rarely go out at all. This exhibition is a response to the shocking research findings that British children are more familiar with Pokemon characters than British wildlife and, as Robert Macfarlane points out in his article: Guardian - Badger or Bulbasaur - have children lost touch with nature?, all the centuries long associations that native flora and fauna have acquired through legend, myth, folklore and story are lost, too.

Robert Macfarlane and Jackie Morris explore The Lost Words from Acorn to Wren. Each bird, plant or animal is shown in the same way. No matter how humble or ordinary, each is reverenced in  an icon: a numinous depiction in gold leaf and exquisite jewellike water colour. It is then  shown within the wider context of its natural world and then, finally, by its absence. This last is particularly powerful and poignant. Starlings are shown by an empty wire,  raven and heron by a fallen feather, the magnificent otter by a line of paw prints. An achingly eloquent expression of loss and impoverishment, both to the world: if this creature had never been, or if we were to lose it, how much poorer would we be? And to the individual: if you don’t know something is there, then it does not exist for you and your world is somehow diminished. 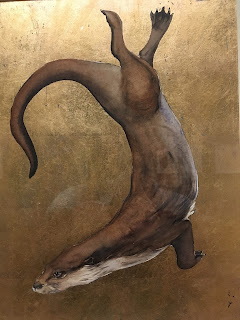 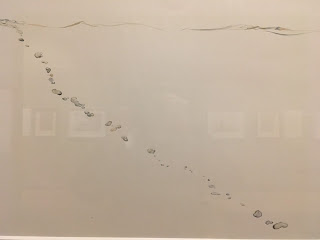 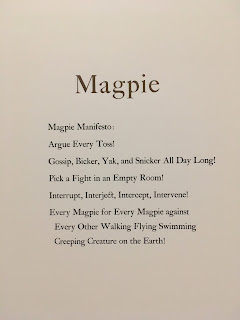 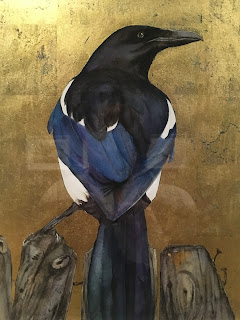 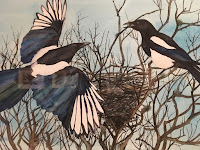 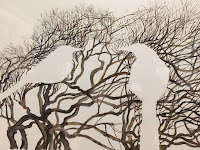 My companion at the exhibition, friend and fellow writer, Linda Newbery , observed that:

'Robert Macfarlane's 'spells' are clever, striking and energetic - not a lazy phrase to be found. As well as being acrostics they also use a formal patterning of repetitions and echoes which makes me think of the Welsh 'cynghanedd' found in Gerard Manley Hopkins. It's especially lovely to hear Robert Macfarlane reading them aloud - they are meant to be spoken, after all.'

Should green-as-moss be mixed with
blue-of-steel be mixed with gleam-of-gold
you'd still fall short by far of the -
Tar-bright oil-slick sheen and
gloss of starling wing. 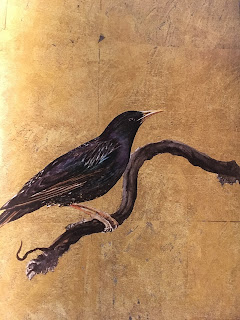 The two artists make a powerful conjuring.  Not least, because they invite the viewer, child or adult, to go out and do something. To look. To learn.To draw, paint, write what you see. Jackie Morris’ sketch book, watercolours, gold leaf and burnisher are there. As are Robert Macfarlane's pens, pencils, notes and notebooks. 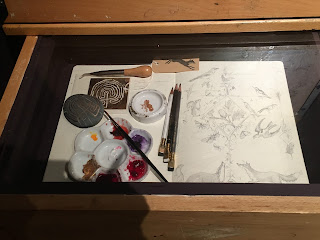 There are drawing and writing materials, paper, crayons and pencils, so young visitors can take inspiration and make their own books. Robert Macfarlane's desk is in the last but one room. When I went in, a child was sitting on a little chair, leaning on this desk, hard at work with crayon and pencil. I'm sure that both the artist and writer would smile to see her there, and consider part of their work done, for the exhibition is an inspiration, an invitation, not just to admire their work, but to go outside and pay attention. 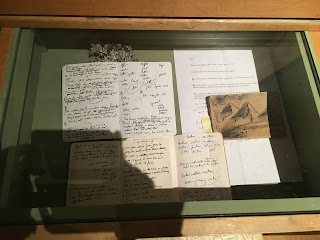 The Words are not lost, they've gone into  hiding and are still there, waiting to be re-discovered. This exhibition invites us to do just that. Like all great ideas, it is simple.  It contains its own solution. It is no mystery. All you have to do is go out and see what’s there in front of you and around you. To look. Not just down at the ground but up at the sky; not just in the countryside but in every park, garden, on every road, alley, avenue, canal, stream, river and urban wild space. It’s all there. We just have to notice and teach our children to notice. Take a photo. Look it up. There’s bound to be an app...

If you can't get to the exhibition, you can buy the book: The Lost Words by Robert Macfarlane and Jackie Morris, published by Hamish Hamilton. It is beautiful and would make a handsome Christmas present for anyone.

I want that book!

This is such a beautiful book. I had a lovely time sharing it with my five year-old grandson - he spotted that on the first page of each sequence, there is a clue as to what this particular lost word will be - I must admit I hadn't noticed!

My sister, who's an artist, was telling me about this book, and I've been longing to see it. Thank you so much for this wonderful post, Celia.

I urge everyone to go to the exhibition, if they possibly can, or get the book - it really is magical!

This is a magical book. For those of us unable to get to Compton Verney but live in London the exhibition is coming to London
https://foundlingmuseum.org.uk/events/the-lost-words/