Molesworth, as any fule kno, was cynical about history, which ‘started badly and hav been getting steadily worse.’ And Arnold Toynbee (or Henry Ford, or possibly lots of people) said that history was just ‘one damn thing after another.’ At school, at least for previous generations, it involved mostly learning dates – 1066 and all that.

But history isn’t one thing after another. It’s lots of things all happening at once, with posterity judging which aspects we remember. Take winter 1918, the period when Star By Star, my most recent novel is set, specifically the seven weeks (and one day) between 25 October and 14 December. What was happening then? Well, the Great War was limping to its close; the flu pandemic which would kill at least 50 million people worldwide was raging; in Ireland, Sinn Féin was gearing itself up to fight an election campaign which would, after a great deal more bloodshed, bring about an independent – and divided – Ireland, and of course, at that election, on Saturday 14 December, 1918, women in Britain and Ireland voted for the first time in parliamentary elections, as did working-class men. You can’t see any of these things in isolation: they all influenced each other, and history played out as it did because of the interplay between them. 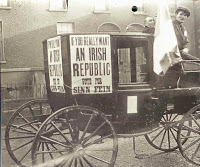 Writing a book about all that accessible to teens  was challenging, but the book was written in winter 2017/18, when things did indeed seem to be getting steadily worse. It was quite easy to identify with my heroine’s feeling that huge and mostly terrible things were happening in the world around her. Giving her agency to influence what she could actually made me feel better about my own role in history, if that doesn’t sound pretentious.

One of the ways in which I harnessed all this galloping history and domesticated it was by knowing exactly where I was in the year 1918, to the very day. This helped enormously.  The novel’s action begins on Friday 25th October 1918. Stella, the heroine, however, for a small but important plot reason, has mixed up the dates and believes it to be the 26th.

So what? Well, I didn’t know a year ago, when I started writing, that Star By Star would be officially published on the 26th October, which felt serendipitous and funny. When I mentioned this to my editor, Gráinne, she admitted that, perhaps catching Stella’s dateslexia, she had kept mistakenly thinking it was the 25th – to the extent that she had printed that date on some promotional material. It didn’t matter a jot, of course, but it amused us. 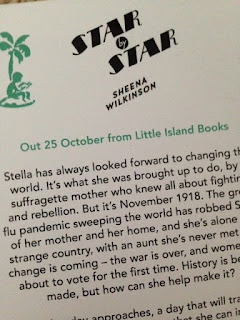 Because the action of the novel is so compressed, I know what was happening in the story almost every day of those seven weeks, and as I embark on various events to celebrate publication, I can’t help thinking, 99 years ago, today… I’m writing this post on 3rd November, the night when Stella has her first significant encounter with Sandy, the traumatised war veteran who becomes her best friend. Next Thursday, 9th November, I’ll be officially launching the book in Dublin, and will be very aware of its being the day in the story when a very important letter was sent. And then, next Saturday, at the Belfast launch, I will be so very conscious that it’s 11 November, a date of huge import in the real world 99 years ago too, but also in the story. On both occasions, I will read from the appropriate day in the story, just because I can.

I don’t know what I’ll be doing on 14th December this year, but I do know that part of me will be living in the story, cheering Stella on as she tries to fulfil her suffragette mother’s legacy on Election Day, a day that would change Ireland, and Britain, forever. In a last twist, my editor has just returned from Barcelona, where, like Stella, she witnessed history being made – though exactly what history, we will have to wait and find out.