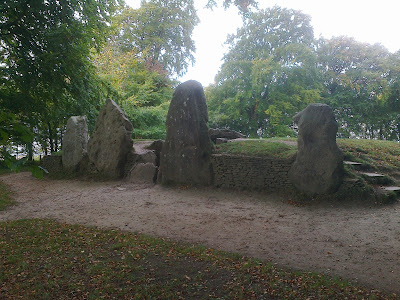 Here is the massive, and massively impressive, neolithic chambered long barrow of Wayland's Smithy, a step and a stride off the prehistoric track called the Ridgeway, near Uffington in Oxfordshire. The barrow was restored in the early 1960s following excavations by  Stuart Piggot and Richard Atkinson, and is believed to have been built in two phases: a small timber burial chamber built around 3590 and 3550 BCE and a later stone-chambered long barrow around 3460 to 3400 BCE. So... very, very old. As we live locally, we often take Polly our dog there, and she enjoys exploring it. 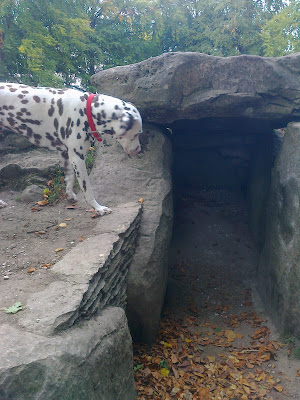 The barrow is entered by a passageway situated behind the middle two stones of the imposing facade. It was presumably blocked by a door once upon a time, and leads into a cruciform chamber. 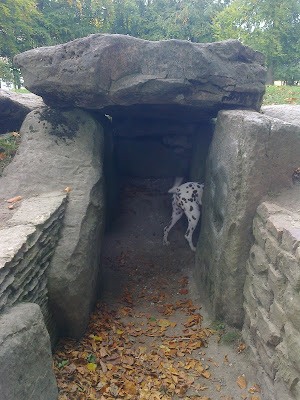 As Polly likes to demonstrate, you can turn right, or left, or go straight on. In each case you will find yourself in a small 'room' where bones of the dead once lay. Enormous capstones roof the chamber, but if you stand on top you can now peek down through gaps which were doubtless filled in when the tomb was in use. 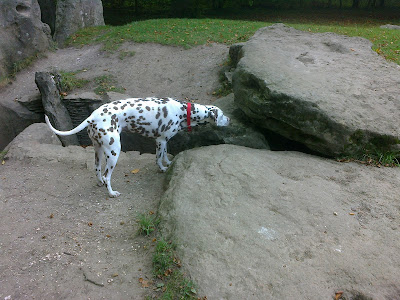 Behind the burial chamber, the mound of the long barrow stretches for over 180 feet (56 m), subsiding in height as it goes, and lined on either side with marker stones. 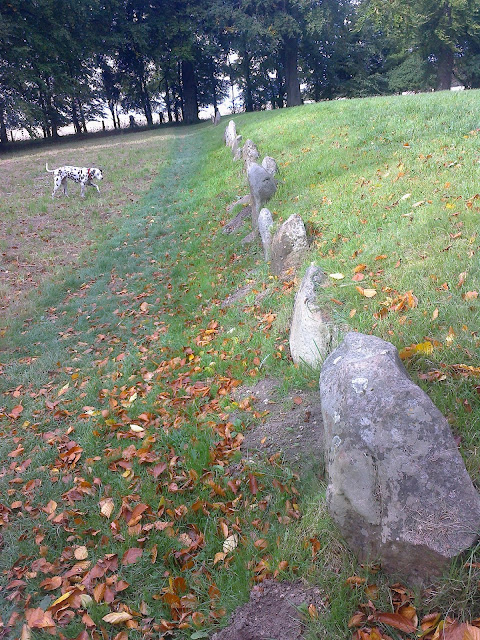 But the purpose of this post is not to tell you about Wayland's Smithy per se - you can look it up online or find books to tell you all about it and the legend associated with it. No: what I want to do is show you pictures of another long barrow far to the north, which we came across by accident this summer, on holiday in Dumfries and Galloway, Scotland. It is Cairn Holy, near the village of Carsluith.  Here, up a rocky path, on the flank of a hill with views of the sea, are two chambered cairns. Or that's how the notices describe them. To me, no expert, but keenly familiar with the long barrows of Oxfordshire and Wiltshire, they are simply miniature versions of Wayland's Smithy. Here is the facade of Cairn Holy 1. It's a little gem. 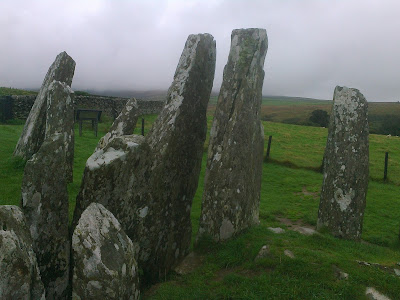 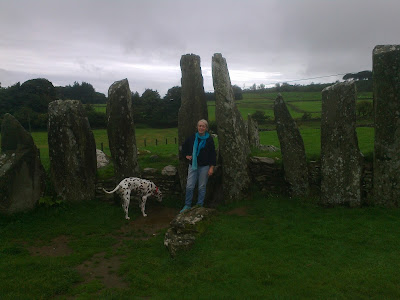 With me and Polly for scale, you can see how much daintier it is than mighty Wayland's Smithy, but nevertheless the similarities are striking. Behind two tall central stones - the entrance stones, one might call them -  is a narrow passage and then a burial chamber or kist. 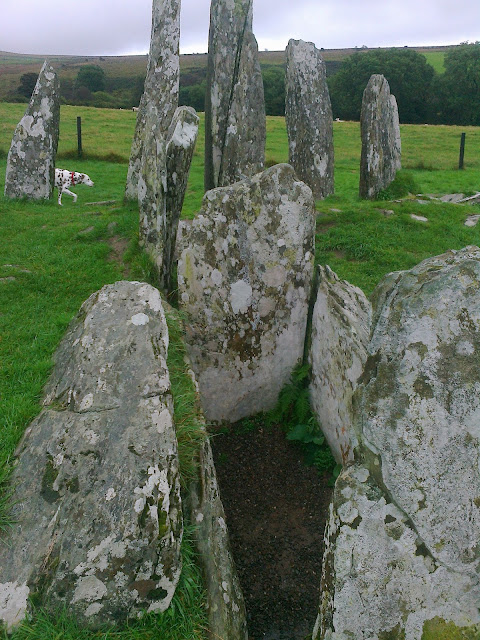 This box-like construction may have been the original tomb, with the elaborate facade and long barrow added at a later phase. No bones have been found in the acid soil, but part of a jadeite axe lay here - jadeite traded or brought from the Alps - and a stone carved or engraved with a spiral pattern, which is now in Edinburgh. Behind the entrance a long barrow slopes back down the hill, edged with marker stones in precisely the same way as at Wayland's Smithy. 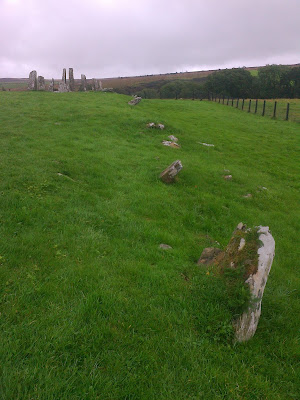 Just a short distance up the hill is the second tomb, Cairn Holy 2, built to a similar plan. Silhouetted against the light like a finger pointing to the sky is the tallest of the two entrance stones, and you can clearly see the lid or capstone of the box-like chamber. In this tomb, a flint knife and arrowhead were found, and fragments of five or six neolithic 'Beaker' type pots. 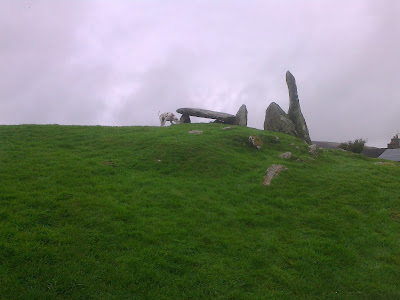 In the picture below you can see Polly taking an archeological interest in the entrance. And there's the sea in the distance. Such a view! 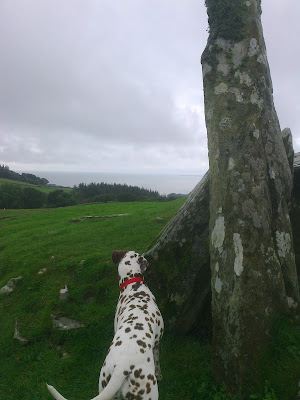 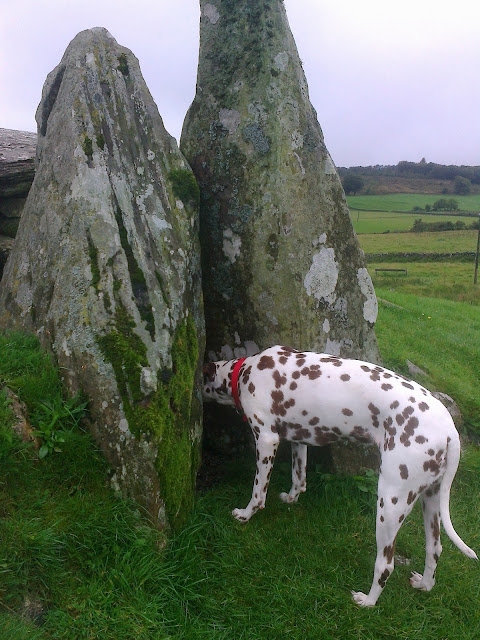 She was absolutely fascinated. What could live in there? And then she explored the roof. 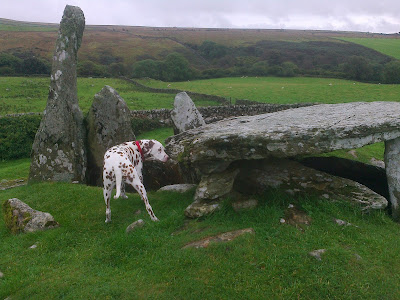 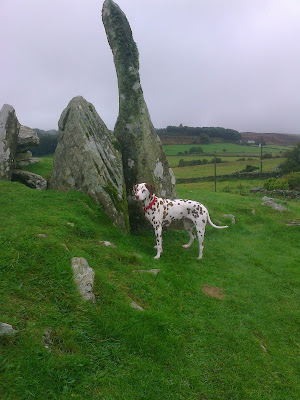 The point of this post is not so much to show you pictures of our dog even though she is clearly the Keenest Brain in Dogdom, to quote Dodie Smith. Rather, I wanted to share the thought that struck me while I was clambering around this breathtaking site: Cairnholy is around 350 miles north of Wayland's Smithy: a distance that even by car travelling on a motorway takes six and a half hours. Yet having visited both, I feel convinced that the people who built Wayland's Smithy would, immediately, have recognised and understood the architecture and cultural purpose of Cairn Holy. And vice-versa. They would have known exactly what the other structure meant, and what it was for.

I don't know which was built first, but in view of the recent revelation that the domestic architecture of Skara Brae in distant Orkney both pre-dates and is replicated by the internal planning of hut dwellings at Durrington Walls near Stonehenge, it wouldn't at all surprise me to learn that Cairn Holy predates Wayland's Smithy. That this culture, this style of funeral monument, worked its way south, not the other way about. Our neolithic ancestors were not, we are discovering, parochial. They travelled widely by land and sea, and traded in ideas and beliefs as well as artefacts. 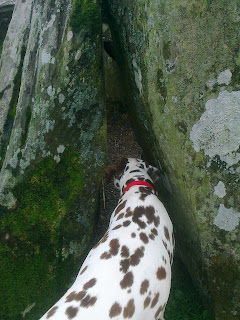 Love this - and the pics of Polly.

BEAUTIFULLY CONSTRUCTED post indeed. The dear dog most certainly enlivens and connects the photographs in a most delightful way and "Polly" becomes our eyes. Interesting musings by you and I'm in full agreement that "we can only wonder." On fact, wondering is a gift :-->

Thankyou both! It was great fun to watch her exploring.

Archaeologist dog! Very interesting. Must take the grandchildren to Waylands Smithy, and Matilda the dog..

A fascinating post! And Polly is a delight, in those ancient places.

To Rewrite Or Not To Rewrite - That Is The Question