A nursing tragedy: the massacre at Radji Beach

'So we marched into the sea and when we got out to about waist level they then machine gunned from behind."

It was at lonely Radji Beach on Banka Island that Australian nursing’s greatest tragedy occurred.

Sixtry-five Australian nurses and over 250 civilian men, women and children were evacuated on the Vyner Brooke from Singapore, three days before the fall of Malaya (now Malaysia). The ship was discovered by Japanese aircraft and was strafed and bombed. It sank in Banka Strait on 14 February 1942. Of the sixty-five nurses on board, twelve were lost at sea. Twenty-two of the remaining fifty-three who survived the sinking were washed ashore on Radji Beach, Banka Island.

Matron Drummond and the other nurses gathered together on the beach, and were soon joined by a lifeboat containing twenty-five British soldiers. When a party of Japanese soldiers arrived they all surrendered. Most of the nurses were wearing the Red Cross brassard (sleeve band), and all were in uniforms of some sort that made it clear they were nurses. They assumed that they would be treated as prisoners of war in accordance with the Geneva Convention. They were wrong.

The British soldiers were ordered to walk up the beach. Once out of sight, they were bayoneted to death. The Japanese soldiers returned, wiping their bloody bayonets, and told the Australian nurses to walk into the water and stand in a row facing the sea. Whey they did so, they were machine-gunned from behind. All except one died. 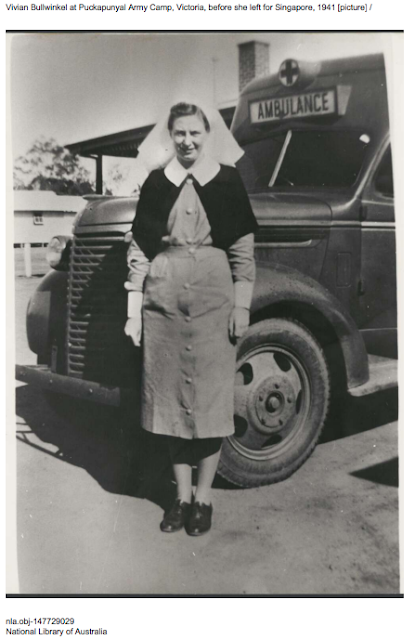 Sister Vivian Bullwinkel, before her embarkation.

'So we marched into the sea and when we got out to about waist level they then machine gunned from behind. I was hit in the sort of side, left side, and the bullet went just straight through and came out on the front. The impact of that and the waves, together with the fact that I thought once you were shot, you know, that you’d sort of had it, I overbalanced into the waves and just sort of lay limply there. To my amazement, I remained conscious and found that I wasn’t dying at all. Then my next fear was that the Japanese would see me moving, because by this time I was being violently sick from having swallowed a fair amount of sea water …" (Vivian Bullwinkel)

Sister Bullwinkel was shot above the hip, but survived by pretending to be dead and allowed herself to drift to shore when all the Japanese soldiers had left the beach.

On the beach she met an English soldier, Private Kinsley, who had also survived the massacre by feigning death. She tended to his severe wounds for 12 days in the jungle until, starving, they surrendered to the Japanese.  Kinsley’s wounds were such that he died soon afterwards, but Bullwinkel managed to survive another three and a half years in various Japanese prison camps.

"Well, once I got there and realised they were taking prisoners I sort of felt that all my troubles were over. All I had been wanting during this time was to get with people and be with my own countrywomen … I heard somebody say, ‘It’s Bullwinkel’. That was sort of the end. I then immediately burst into tears. (Vivian Bullwinkel)"

She told the Australian nurses what had happened, but they were all sworn to secrecy so that the Japanese would not be aware that there was a witness to the atrocity. 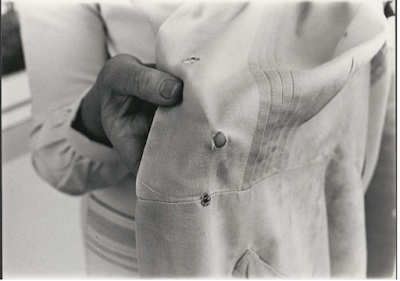 Where the bullet came out, Vivian Bullwinkel shows the holes in her uniform, Fairfield, Victoria, ca. 1975 [picture] /

After two weeks in Muntok, the group was transferred by ship to Palembang in Sumatra, where the Japanese attempted to persuade the nurses to join a brothel. When they refused, they were sent to live in appalling conditions with Dutch women and children at the other end of the town. Sanitation was inadequate, mosquitoes tormented them and food was scarce:

"We could smell decayed vegetables and bad Chinese cabbages long before the truck bringing them arrived in the camp. Every now and then a piece of wild pig, called a ‘moving mass’ by some bright soul, would arrive and be thrown on to the roadway, where it was immediately surrounded by dogs. We were not allowed to call the dogs away. The drill then was for a Japanese guard, to cut it with his penknife into so many pieces—one piece to each house … Our ration for 24 people would not cover the palm of a hand." (Betty Jeffrey, White Coolies, Sydney: Angus & Robertson, 1954) 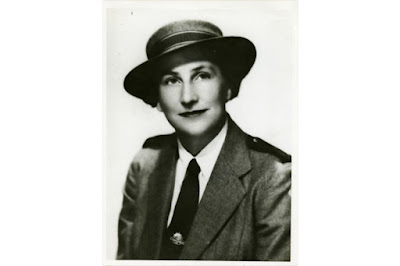 Berry Jeffrey, 1941 (Australian War Memorial photo)
In December, the women were moved to Palembag jail, and conditions deteriorated further as they were moved from camp to camp. Wherever they went, rations were scarce and there were few medicines. 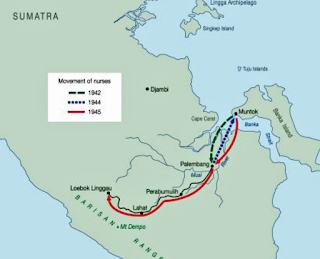 Movement of the Australian nurses. (Image from http://muntokpeacemuseum.org/)

By now, they were severely malnourished, and in February and March 1945 four nurses died of malnutrition and beri-beri.

"A lot of people shouldn’t have died; they weren’t any worse off than I was. In fact, they weren’t as bad as we were because we often did their heavy work in the camp, whereas they got out of it somehow. But they died just the same, possibly because they didn’t do those things.
We had to work on practically no food, but it was a kind of mental attitude, and your friends—there was no doubt about that—you kept each other going. The POWs have a saying: ‘the spirit that kept the spirit going’. That was true, you had to have that will to live, you had to have companionship, you had to have the will to do things, you had to be able to cope." (Mavis Hannah) 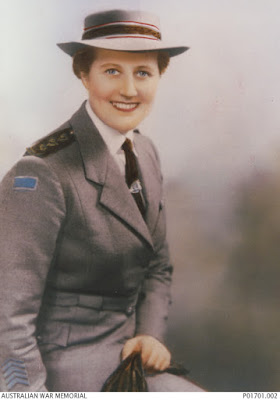 Mavis HAnnah was a staff member of the 2/4th Casualty Clearing Station (CCS), and was the only nurse from the 2/4 CCS to survive the sinking of the Vyner Brooke and subsequent captivity.

In April 1945, the nurses, together with other women and children, were packed into the holds of a small ‘bumping little launch’ for a 26-hour sea journey to Sumatra. By then, many were severely ill with malaria, dysentery and beri-beri, so that those who were unconscious or too ill to walk had to be carried on stretchers by the ‘fittest’ of the women.

"From the food, the other very important thing, of course, was maintenance of health, and this was very difficult to do because we had no preventative medicine in any way. Malaria was rife, dysentery was rife and towards the end of the three and half years, of course, beri-beri became prevalent and this was very distressing. Funnily enough, we didn’t seem to have very much in the way of toothaches or the need for surgery until towards the very end of the three and a half years. I think we had one broken limb, which sort of knitted itself. The babies that were born in camp after we had been taken prisoners survived. They lived on rice water and, for the first 12 months, they really looked beautiful children, but after that … they suddenly aged very much and although they had these small limbs, their faces looked very old." (Vivian Bullwinkel)

Four nurses died at the isolated prison camp at Loebok Linggau—one of them three days after the Japanese surrender on 15 August 1945. 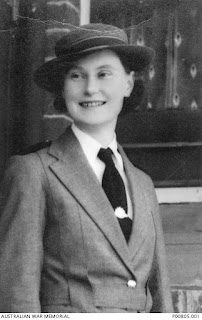 On 17 September, one month after the Japanese surrender, 24 Australian nurses were at Lahat aerodrome, waiting for their aircraft to arrive from Singapore and take them home. The matron-in-chief of the AANS, Colonel Annie Sage, stepped onto the tarmac with Sister Jean Floyd, one of their colleagues from the 2/10 AGH, who had managed to escape safely from Singapore. Colonel Sage looked at the emaciated group before her.
‘But where are the rest of you?’ she asked. 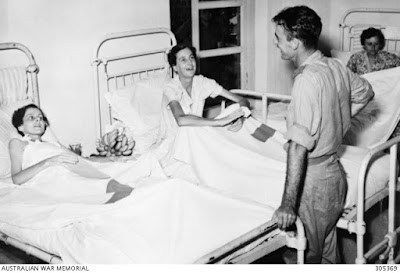 Sisters Jenny Greer (left) and Betty Jeffrey recovering in a Dutch hospital in 1945. 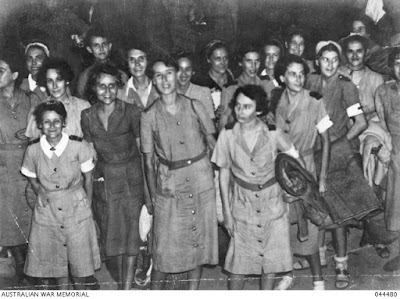 After their release: the remaining Vyner Brooke nurses. 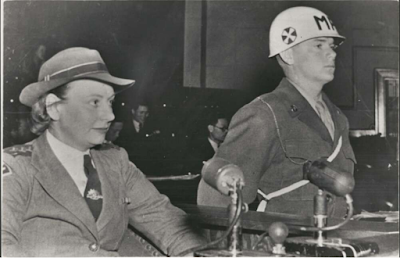 [The above is taken from my book: An Illustrated History of Nursing in Australia (National Library of Australia). To be published 2018.]

Posted by Deborah Burrows at 12:08

Thank you for this account of one more tragedy from WW2 that I had never before heard of. Their story deserves to be told - you have given the victims a voice.
The cruelty of the Japanese was quite extraordinary - it is good to see that at least some of them were brought to justice at the Eastern War crimes trial.

Thank you for posting this - I had no idea.