A memory trail, by Sue Purkiss

I've vaguely noticed on social media lately that there's been a lot of stuff about de-cluttering. This very morning, someone posted a picture of a smiling lady called Marie Kondo saying: "Ideally, keep less than 30 books." (Seriously? It must be a spoof, right?) 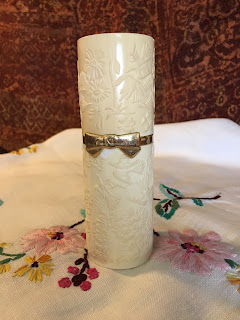 Well, the other day I discovered, lurking in the back of the bathroom cabinet, this bottle of eau de toilette. I looked at it thoughtfully. I know for a fact it's over fifty years old, and I know that I don't use it. Why keep it? Just clutter, surely. It must be off by now. Just to be sure, before it goes in the bin, I take the top off and spray it.

And there it is. The sweet, flowery scent of Nina Ricci's L'Air du Temps, just as fresh as it ever was. Perhaps it's kept so well because it's in a plastic container - embossed with flowers, doves and butterflies and finished with a golden bow - rather than in a glass bottle. My sister brought it back from France as a gift for my mother, when she went to France as a teenager on a school exchange. This was the sixties. We lived in an industrial town between Nottingham and Derby. We went on holiday every year to seaside towns - Skegness, Bridlington, Llandudno. 'Abroad' was out of reach for us as a family - it was the school which made it possible. My sister came back with talk of wine at every meal, with necklaces made of melon seeds and small tawny beads, and with this bottle of French perfume, which was so much cheaper than it would have been in the shops because it was from that exotic place, 'Duty Free'.

My mother, I'm sure, was thrilled. She never used it, just as she never used face cream or eye make-up. Occasionally she would dab on a little powder from her Max Factor compact, and a slick of red Coty lipstick: never anything more. 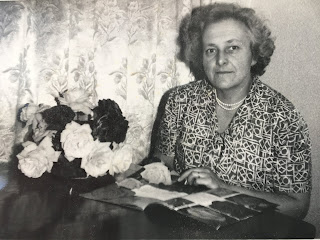 Here is a photograph of Mum which I found recently in a drawer (full, yes, of more clutter). I remember taking it. It was in our house at Kirk Hallam, so I would have been in my early teens. I'd bought a camera when I was about twelve. It was a Koroll 11, and it came from Boots in Nottingham. I think when I took this picture I'd just acquired a flashgun, and I wanted to try it out. (It had bulbs and everything!) So I posed Mum in front of the window, drawing the curtain to keep out the light. Looking at the picture, I'm reminded that the curtains were a pale green brocade, with silvery flocked flowers. Mum would have sewn them. She loved gardening, and so I put the bowl of roses beside her, and put a rose catalogue in front of her. The blouse was some silky stuff - green too, I think, with a cream pattern. She'd have made that, too. As you can see, there was nothing casual about this picture - films were costly, as was developing, and I had to pay for them out of my pocket money, so every frame counted.

The perfume was kept on her dressing table. There was always an embroidered or lace-edged cloth on the surface, and a cut-glass tray, and one or two framed pictures of us when we were small. And there were these, which I don't think she ever used - the brush is too soft to be practical - but nevertheless had pride of place. I have them now - more clutter, I suppose. I don't know where they came from, but I suspect from Auntie Ada (no actual relation) or Mrs Thorpe, two elderly ladies who were both clearly fond of Mum, as her own mother did not seem to be. 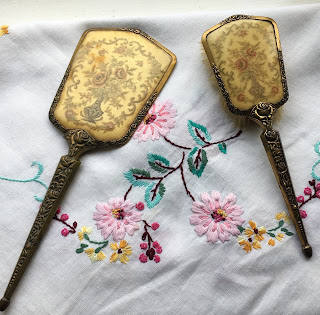 So. Bits of clutter perhaps, but clutter which brings with it a trail of memories. And, to be honest, some rather sad thoughts of a mother who seemed able to show her affection only obliquely - through what she made and what she cherished. I wish I could give her a hug. I wish she could have been a happier person. But I'm so very glad I never threw away any of these things which help me to remember her.

And the embroidered tablecloth? Yes, she made that too.
Posted by Sue Purkiss at 02:00

Just lovely. Wish I had more artifacts from my Mom long gone. A few items and loads of photographs. I loved that perfume back in the day tool

That was my childhood too - and my Mum (except mine was Chinese). And I too have old bottles of perfume. Shall give them a squish! Loved this piece. Btw, Marie Kondo is about 30 - when you're thirty you don't understand about memories. She also says you should throw out old photographs. What???

such a lovely post. I love the picture of your beautiful mother and the story of how it was posed. Thirty books? How bizarre. I'm clinging to my thousands, and to my clutter and its memories. I don't care if I drown in a sea of dust and mites.

What a beautiful post, Sue. It brought a tear. so much meaning in such small objects. They are not are not 'clutter' but treasures beyond price.

Beautiful post, Sue -- and such a wonderfully set-up photo of your Mum, with so much meaning in it. A portrait, truly.

Hooray for clutter -- and 'keep no more than thirty books'? What nonsense is this? I have more books than that piled on my stairs.

Such a beautiful post. 'Clutter' and threads to the past are in no way the same. Emptied plastic food containers are clutter; books and family treasures and memories are not.

I love how the perfume brought back so many memories. I'm impressed, too, at the photo you took of your mum. What a lot of planning and thought went into it for such a young girl.

Thirty books! Marie Kondo probably keeps hers on her Kindle to save space!

Thank you I have been seeing this discussion online of 30 books only and ones that enrich your life, only 30, I have thousands and the other day I had a call about a topic which had two current books available in the library system, needed for an audition and very important to the person! I managed to get her one from the library shelves but I also had one at home from the 70;s which I could put my hand on and lend her as a person for a few weeks to help her audition piece! Not a new shiny book, not even the only copy of that book on my shelves (not sure where the other copy has gone? probably loaned too) you never know when something may bring back a memory, time or help someone else. some folk may have books they will never read, or things that are just clutter, I have a collection I adore, first editions yes, out of prints yes and more :-)

Thank you all for your comments - you're very kind!

Thanks for this, Sue. Our memories, and the objects that remind us of them, are things of such poignant wonder.

If it were called "de-treasuring," none of us would do it!

Talking to a friend who recently had to pack up two houses, one her mother's. She said that her grown daughters were not interested in a lot of the old dishes, etc., and that many places who take donations don't want old dishes and such. I have already split some of my things with my two daughters. I think they are pleased with some of the dishes but I know they would never be interested in some of the things I have from childhood and I don't want to donate them for fear they might get tossed. So I decided to get a tote and wrap all the things that are most precious only to me, have my husband dig a deep hole with the bucket on his tractor and bury them! They won't get tossed and will be ready for the archaeologists of the future to wonder over them!

I really enjoyed this post. Only 30 books! That's simply not possible! I'm in the middle of doing some decluttering and it's a nightmare. I'm trying to get rid of what one might call out of date text books. I have a number of history books which were cutting edge in their time, but that time has long gone. I skimmed through one and realized that the author (male) obviously thought that women didn't exist in historic times.