Gaetano Meo and his great-granddaughter. By Adèle Geras

Before Christmas, I spoke to my friend Helen Craig about her great-grandfather, Gaetano Meo, and I'm also  grateful to Sarah Timewell for her help with much information about him. He's the handsome young man in the very jolly hat below. 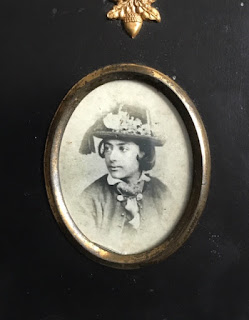 He's also the gorgeous youth in Edward Burne- Jones's famous painting, Love among the Ruins. You will find him in paintings by Dante Gabriel Rossetti, Henry  Holiday, and William Blake Richmond, who taught the young Italian to paint. Gaetano had walked all the way across Europe from his home province, Basilicata, near Calabria, earning money by playing his harp. In London, he met members of the Pre-Raphaelite Brotherhood and today, his image is here, on display in the exhibition currently on show at Tate Britain. 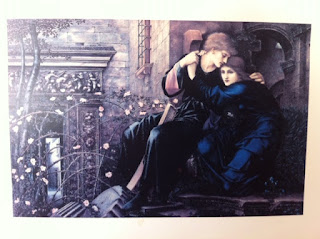 Below is one of Gaetano's drawings, now in the possession of his great grand-daughter, Helen Craig.  It's a depiction of his birthplace, called A Memory of Basilicata. 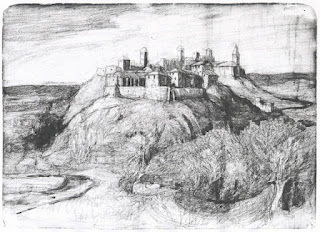 Readers all over the world know Helen as the creator of the beautiful illustrations for Angelina Ballerina, but as well as being one of our best illustrators of many different children's books in addition to the  Angelina stories, she's also an accomplished sculptor. 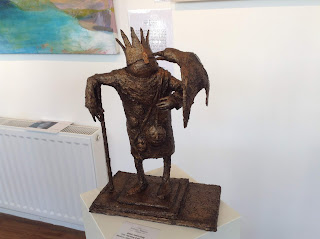 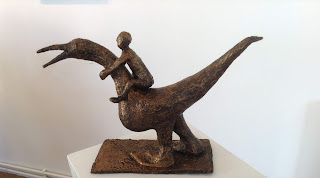 Helen grew up hearing stories about her famous great-grandmother, Ellen Terry, whose son by Edward Godwin was the theatre designer, Edward Gordon Craig. He has a theatre called after him in Stevenage and he changed the way sets were conceived and hugely extended the possibilities of what could be done on a stage. While a neighbour of the Downshire Hill house in Hampstead, Edward Gordon Craig, (who was married) fell in love with Elena, Gaetano's violinist daughter and they ran away to live together.  Gaetano was enraged, but later,  he and Elena were reconciled. Helen's father, art director Edward (Carrick) Craig, often sat with his grandfather, listening to tales of his adventures on the way to England, including the story of the captain who smuggled him aboard a ship bound for London... 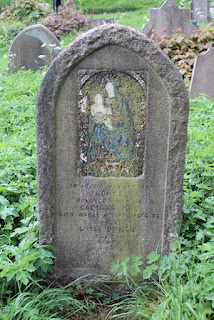 The grave where Gaetano is buried was somehow forgotten until  recently. It was made by him as a memorial for his beloved wife and it was the last mosaic he created. When it was rediscovered,  it was not in a good state, but Helen, together with the well-known mosaicist Tessa Hunkin (who carried out the skilled cleaning, and the replacement of fallen tesserae) brought it back to its old glory once again. 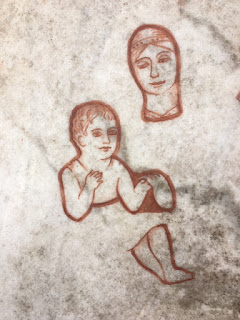 After much preliminary experimentation with different paints to see what would be suitable for working on  glass (which is the material used for the tesserae) and after many sketches of the Madonna and her child, Helen went to Hampstead Cemetery to paint new and beautiful faces on Gaetano's gravestone. Her nephew, Paul,  fixed up a wooden frame which made it possible to paint straight on to the glass and here's a picture of Helen doing that on a hot summer day. 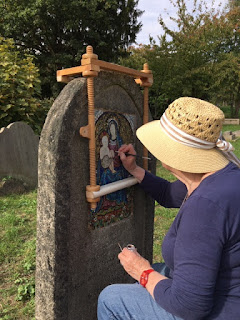 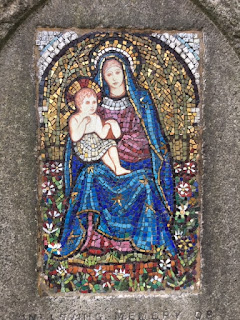 ...and I'm sure Gaetano would have loved it and been proud that his own great granddaughter  was instrumental in restoring it to a state of great beauty.  If there's an afterlife, Helen's ancestor, (who seems to have been a delightful man, as well as a talented artist,) would be thrilled to bits with what she's done.

Helen has a hat too, though it lacks Gaetano's decorations. Here she is at the grave. She should put a feather in her cap, I think, in honour of what she and Tessa Hunkin have rescued from oblivion. 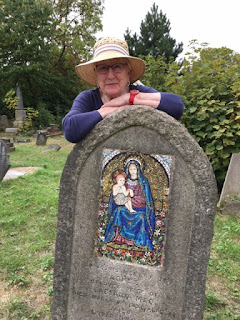 How absoutely wonderful - what a great post, thank you! I learn so much here at History Girls :)

How beautiful and sad, though happy at the same time: death, but also life's continuance in Art and Love and Memory. Now I want to see the film - and an exhibition of all the family's art, too.

This is wonderful! Thankyou.