Other People's Rubbish or The Charm of Ephemera

It started with a button jar. ‘I can’t quite bear to throw it out,’ my friend Susanne said, ‘but I must be sensible…’ 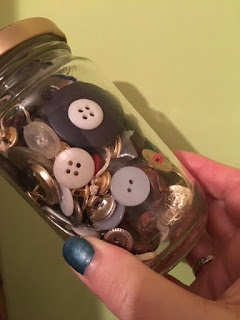 I was a strange child. I hung round at the end of jumble sales to buy the ragtag rubbish toys that hadn’t sold. One-eyed cats; amputee teddies, once a knitted doll of such startlingly bad execution that my own eight-year-old knitting skills were better. I never paid more than 5p and often the kind churchy ladies would give me the toys for nothing, because, ‘Sure, they’ll only go in the bin’ – at which I would cover the toys’ poor ears (if they had them). When I read Little Women I identified with Beth March’s retinue of mutilated dolls (though it was animals I favoured: I remember a particularly forlorn woollen cat.)

As an adult I have learned to harden my heart. I am a cruel thrower out of letters, shredder of old photos and packer-off-to-the-charity-shop of faithful old frocks. For that reason perhaps Susanne asked me to help her pack up the large house, once her childhood home, she is moving away from. ‘I know you’ll be sensible and not let me hang on to sentimental rubbish,’ she said.

It is easy to be sensible about the death notices of other people’s relations; the pages of O level notes; the baby clothes; the costume jewellery worn by other people’s aunts. The rubbish pile was satisfyingly higher than the keeping pile. We were good at this unsentimental business!

But the coins. Her father had been an enthusiastic collector of coins, and who can resist a silver sixpenny bit, especially the Irish one with the dog on it? Such classic design could not in conscience be thrown out. 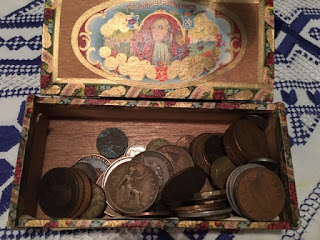 And the old Brownie badges? I have no idea what happened to my own Brownie badges (I left in 1978) but I could not bear to think of Susanne’s being discarded. As for the collection of china horses – no, no, no! They had such trusting faces! As for those adorable little cotton handkerchiefs with the horses’ heads on them – why, they were exactly like the ones people in pony books used to get in their Christmas stockings. And they took up no space really.

I left Susanne’s house with a bursting carrier bag full of, well, other people’s rubbish, really. But fear not, gentle reader: this is not a matter of sentiment. This ephemera will work for its keep. I have several workshops on historical fiction to give in the next few months and who knows what flights of fancy might be inspired by that bag of coins, or the ARP badge or the mid-century dolls’ house furniture? 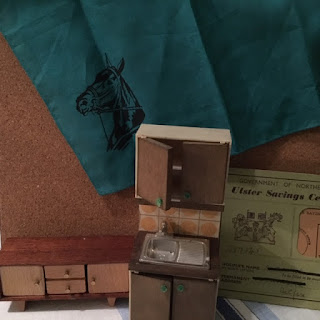 And the button jar of course. I have never quite forgiven myself for letting my own granny’s button box go. I’ll look after this one better.

Enjoyed your article very much. Just wanted to let you know that the dollshouse furniture can be sold for quite a bit of money. Have a friend in England who specializes in such things.

I'm currently doing major clear-outs after 30 years in the same house, but I would never throw out my jam-jar full of buttons!

Susannah Walker has written a fascinating memoir on the issues surrounding possessions, emotions and hoarding called "The Life of Stuff". I'm reading it at the moment so found this article very timely and interesting. Thank you!