Yesterday I thought a lot of Janus. Christianity’s early rise as a major religion was strongly linked to the Roman Empire, so in the Julian and Gregorian calendars we have a month named after a god. More than one month, in fact, but today I shall focus on just that one. I love this. It reminds me, always, that the relationship between religions and the places they grow up help shape the way they shape us. I don’t want to talk about that today, however. I was thinking of Janus.

In the Middle Ages (which is definitely the period of western European history I know most about) representations of Janus showed him as two-faced or three-faced. On a bad day, I would make Batman jokes about Two-Face, but today is a good day, and what interests me is what Janus means for the way people saw time in the Middle Ages. 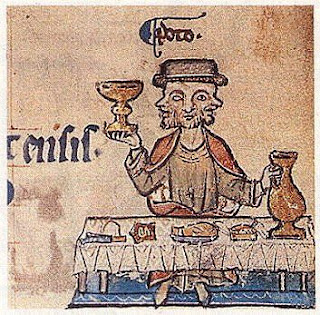 Janus was two-faced on calendars because he looked back into the old year and forward into the new. This reflected something so important culturally that we still check our futures on horoscopes and we make resolutions for the New Year and we write “This is what 2018 was like.” Not everyone does all of this, but enough of us do these things that I have to suspect that this response to the change of years is a deep artefact.

It may date back to far earlier than the Middle Ages, and it may not. My evidence is Medieval. In the Middle Ages one gave nice gifts (gloves, for instance) to celebrate the new year. That was part of the looking forward, too. These presents were, I suspect, more important than anything given for Christmas itself, for we have a lot more listings of presents given for the new year than for any other part of Christmastide.

In the Jewish Middle Ages in the same western European countries, Janus does not appear. Jews used both the Christian calendar (for their everyday interactions with the majority part of the community) and their own, and the change of year was governed by the Jewish calendar and was, as it is now, in September/October. White was the colour of the New Year, so white food was popular. New food was popular and new clothes.

The celebration of the calendar change focussed more on the forward and the cleansing of the slate than on looking back. I suspect this is because there is a formal ‘looking back’ during the ten days after the new year itself in the Jewish calendar. This means there isn’t as much of a call for it during the actual new year celebrations.

Interestingly, Judaism and Christianity lived alongside each other in ancient Rome.

Cultural remnants are not always an indication of worship. Christianity was the minor religion of the two nearly 2000 years ago but it adopted facets of Roman religion quite early. Judaism did not. The gods that label Jewish months are earlier deities from a different region. Just as Christians didn’t worship Janus just because Janus illustrated calendars and prompted people to look at both past and future on New Year, Jews didn’t worship the gods that appear on the Jewish calendar.

If gods don’t indicate worship or even belief, what do they indicate? Why weren’t they dropped?
They are cultural remnants that act as reminders of the paths our cultures have travelled. I mostly like to think of it as a form of respect for our ancestors. Our world is very different to theirs. Some years, though, certain similarities strike. I look at Janus today and see something old that’s nevertheless very new and very important. 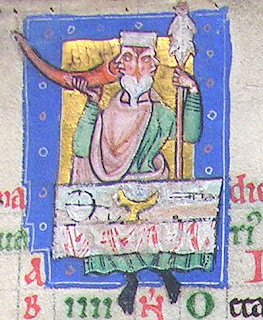 Cooking, however, is part of a vastly complex everyday and that everyday is our Janus-looking-backwards. I’m not actually a culinary historian. I’m an ethnohistorian. I need to understand people and their societies, not simply one element of them, but as much as I can.

Janus is important as an indicator of the strength of culture over time and of the legacy that culture gives us. Cultural artefacts can hang on or leave powerful echoes. Culture is not some neutral aspect of the universe: it’s our lives. Janus reminds us, every year, that we have a past as well as a future. If we’re wise and clever and remember to look back and think about that past, we’re more likely to walk into that future without as many burdens. If we stride forward blindly, then we’re carrying all kinds of burdens with us.

Right now, with all the hate in our current world, it helps me to be able to look at the witch trials and back further at how the Inquisition targeted people who were Christian but with Jewish ancestors, and back further at the invention of the blood libel. All three of these vile parts of the past have carried forward into the present and are with us right now in a variety of forms. Imagine a Janus looking at mass murder in the past and then imagine him turning his head and looking at us, with a grim face. He’s seeing the same sights in both directions.

That’s the way I see Janus this year. We had a difficult 2018 and 2019 is going to be a challenge for many of us. The wonderful thing about looking at history through Janus’ eyes is that we know it. It doesn’t just change theoretically. We change it. We can choose to carry all those wonderful foodways forward and we can also say, “But we don’t need to carry this other thing.”

Instead of a resolution, we can make a choice as to which aspects of culture we want to keep from those that Janus saw in the last year.

Looking back colours what we see when we look forward. It also helps us to say “I don’t want this” and pushes us to action. This year, I can see precisely why Janus was so important when the year was depicted in the Christian Middle Ages. It was nothing to do with his ancestry as a god and everything to do with the help he gave in understanding what the year meant and how to handle its more impossible aspects.
Posted by Gillian at 00:30