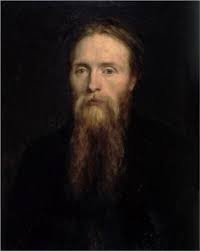 I’ve always enjoyed his dreamy romantic paintings. His androgynous, droopy people may not be anatomically correct but they do have great imaginative power. This exhibition at Tate Britain, which finishes on February 24th, also includes stunning examples of his stained glass windows, tapestries and painted furniture. 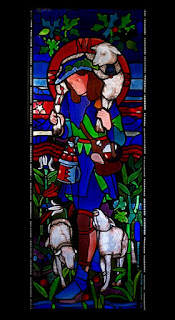 Edward Jones’s mother died when he was a few days old and he was brought up in Birmingham in poverty and dreariness. Romance and beauty had to be invented and from an early age he loved poetry, myths and legends. When he went to Oxford to read theology he met William Morris, his lifelong friend and ally. Their joint project has been described as Christian socialism; together they threw their lives at a socially engaged art, trying to create a “heaven on earth” that could reach a wide audience and compensate for what they saw as the drabness of modern life. He added the ‘Burne’ to his name later because, as he said, of “the natural yearning of mortal man not to be lost in the millions of Joneses.” 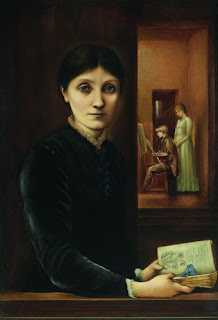 He married Georgiana Macdonald, seen here with portraits of their two children inset. She was an intelligent and dignified woman who started with artistic ambitions of her own, but “I stopped, as so many women do.” After his death she wrote a loyal memoir about him and seems to have tolerated his love affairs and passionate friendships with women of all ages. For thirty years they lived at The Grange in Fulham, which was then quite remote. Their friends joked that directions were: '”Go down the Cromwell Road till your cab horse drops dead, and then ask someone.'

Like Edward Lear and Charles Dodgson, Burne-Jones adored children and wrote funny and charming illustrated letters to his own children and also to many others. The title of Fiona MacCarthy’s excellent biography of him is The Last Pre-Raphaelite. As a student he read and admired Ruskin and when he saw the work of the Brotherhood - Millais, Holman Hunt and Rossetti - he felt an immediate connection which resulted in lasting friendships with them all. Burne - Jones seems to be one of those artists who divides people - perhaps between romantics and pragmatists? Jonathan Jones raged in the Guardian after seeing this exhibition, ”to put it bluntly, Burne-Jones is a stupid artist.”

He was well connected; he knew ‘everybody’ in Victorian cultural life and Rudyard Kipling and Stanley Baldwin were his nephews. However, he always regarded himself as a solitary artist and was a reluctant joiner who drew sympathetic cartoons of himself as a ridiculous figure. 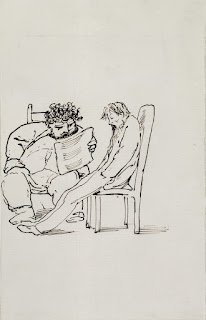 In this one he falls asleep while William Morris reads to him.

Burne-Jones was self taught apart from a few months when he lurked in Rossetti’s studio, watching him paint. Over a lifetime of hard work he developed sophisticated techniques. The colours in his paintings and windows are strikingly beautiful, and he experimented with colour, using the newest pigments, including cobalt blue, green-blue ceruleum, Field’s vermillion and violet. He learned from the research carried out by the chemist George Field which pigments would be stable and lasting., whereas many painters of the period, including Rossetti, used degradable paint. His colours have lasted well - his painting The Golden Stairs, (1876-1880), for instance, has never required restoration.

He loved Italy and was strongly influenced by his four trips there. He studied the work of Botticelli, Leonardo da Vinci and Michelangelo and in 1871 he spent hours lying on his back staring at the Sistine Chapel ceiling through opera glasses. 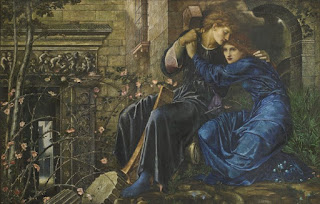 Love Among the Ruins

Painted between 1870 and 1873, this painting takes its title from a poem by Robert Browning and is also thought to be about the artist’s own doomed love affair with his model and muse, Maria Zambaco. In 1893 it was damaged, irreparably it was thought at the time, in a photographer’s studio but Burne-Jones eventually found a way to restore it. In 2013 Christies sold it for £13 million.

His friendship with William Morris survived political differences of opinion when Morris became actively involved in radical socialist politics and considered Burne-Jones had too many Tory friends and patrons. Young people, most of them attractive and rich women, who gathered around this group of artists, intellectuals and politicians called themselves ‘The Souls.’

In 1884 this painting, King Cophetua and the Beggar Maid, caused a sensation when it was exhibited at the Grosvenor Gallery. Based on a ballad about a king who is smitten by a beautiful homeless woman it was seen, both in England and internationally, as an allegory about social injustice. The artist must have enjoyed the acclaim but he didn’t become pompous  - in fact he sent himself up with a very funny cartoon showing how Rubens would have treated the same subject, with a terrified king intimidated by a voluptuous beggar maid.

Together with William Morris, Burne-Jones was a strong influence on the Arts and Crafts movement of the 1880s, which embodied his passionate belief that art and craft techniques were equally valuable. However, he resisted becoming a member and said he had “always been a little painter, painting away in a room and having to think of nothing but my work.”

Four years before his death he accepted a knighthood, despite his own doubts about joining the establishment and the disapproval of both his wife and Morris. Georgiana became involved in the women’s movement and he joked that he was going to retreat into a convent. When he died of heart failure in 1898 he was the first artist to be given a memorial service in Westminster Abbey.
Posted by Miranda Miller at 01:00

Excellent information about someone who I, embarrassingly, knew little about. Thank you

I blogged about the exhibition on 1st January - marvellous, isn't it?

I quite agree. Now I'll read your blog, sorry I missed it.