Miró at the Grand Palais in Paris, by Carol Drinkwater

Ever since we moved to the south of France I have been a great fan of the artist, Joan Miró.
There is an excellent collection of his work at the Foundation Maeght in St Paul de Vence, which is set in the hills behind Nice. This is really where I first discovered him and I frequently return there to the gardens to sit amongst his paintings and sculptures in such perfect surroundings.

"For me, a painting should be like sparks. It should dazzle you like the beauty of a woman or a poem."

His works are joyous and full of colour and poetry. Ideal for this grim winter. Alas, we are snowed in outside Paris and I have flu so I have not been able to get myself to the highly-praised exhibition that is currently taking place at the Grand Palais in Paris and which I had intended to write about for this month's blog. It runs until 4th February so there are few days left and I am still hoping that I can make it.

The exhibition consists of close to 150 works and is laid out in such a way as to trace the stylistic and technical evolution of the artist.

Joan Miró was a Catalan artist born in Barcelona in 1893 and died in Palma, Majorca in 1983. He began to paint at the age of eight. When he reached college age, his parents insisted he study business which caused him to have a breakdown. In his early years he was influenced by the works and architecture of Antoni Gaudi who rarely strayed far from his home city of Barcelona.

Miró first went to Paris in 1920. He was 27 years old when he met Picasso at the great man's studio in the rue de la Boétie.  Picasso aided and befriended the younger artist and was a important help to Miró in that he pushed dealers and collectors in the direction of his fellow Spaniard, helping Miró build an international reputation.

Miró spent the Spanish Civil War years in Paris although unlike Picasso, Miró did return to Spain during the years of Franco's dictatorship. In 1940, he moved to the island of Mallorca. Both men were deeply affected by the events that were taking place in their motherland. Picasso never returned to his native home; he remained an exile to the day he died.

Both artists, through their work, were important witnesses of the tragedy that was twentieth-century Spain. 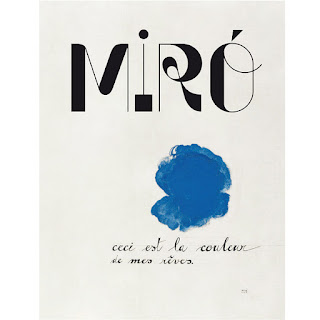 Catalogue cover for The Colour of My Dreams, Joan Miró Retrospective. 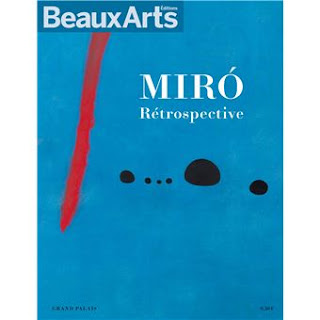 I still hope to get myself to the exhibition in Paris before it ends.  If you are in the capital, I urge you to head over to the Grand Palais before 4th February.

I apologise for the brevity of this blog. I am now going back to bed and I might buy some Miró-inspired socks to keep me warm. 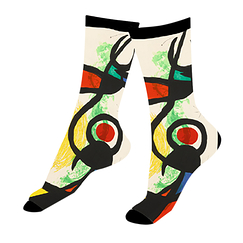 I very much enjoyed your blog.
Miro, Picasso, and Marc Chagall were the first painters I was drawn to,at age 7, admiring them as I filed down the halls of my Elementary School.
Powerful, transporting imagery for children and for me,
later to become a painter and designer myself.

I did not know the story of the Miro~Picasso relationship.
Time to delve into each amazing biography.
Winter-
We have a pneumonia epidemic going on here north of Chicago,(at least for people over 60), as well as snowstorms and a polar vortex. I am telling people to take care of themselves and guard their health seriously.
January in France with the "grippe" is no joke. I was staying in Grasse one January where it seemed everyone was struggling with the flu.
There will be other exhibitions, get well.

What a lovely post - and such joyful, cheering paintings in this dismal weather! Thank you, Carol. I do hope your snow melts and you feel well enough to get to the exhibition before it ends.

Thank you Ann and aajar for your good wishes. In fact, I managed to get out and see the exhibition a couple of days ago. It was wonderful, full of vitality and wit and warmth. My sole gripe was that so many of the visitors traipsing through were taking selfies in front of the paintings which rather intruded upon my enjoyment. With patience, I was able to appreciate all and have the catalogue for reminders and further enjoyment.