ONCE UPON A RIVER by Diane Setterfield. Review by Penny Dolan.


The opening chapter of ONCE UPON A RIVER led me quietly and confidently into a long and satisfying story. I was not disappointed. 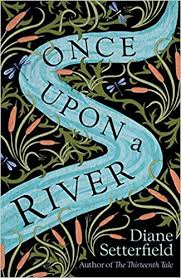 Diane Setterfield’s third novel takes place in the late nineteenth century. She weaves a complex, gothic story that is set along the rural banks and meadows of the Thames between Cricklade and Oxford. At times, though the haunted landscape almost drips with mist and marshiness, the writer's well-researched descriptions of Victorian life make ONCE UPON A RIVER feel firmly plotted underfoot.

Setterfield lives in Oxfordshire and knows the area well. In real life, the ancient inn at the centre of the novel – The Swan - does stand close by Radcott Bridge; Brandy Island was the site of an old distillery, and the central character of Henry Daunt - with his glass plates and his travelling darkroom – is based on Henry Taunt, an Victorian photographer whose popular Thames tourist scenes can be found in Oxford archives. I found this is a wonderful novel, rich with intertwining events, places and characters: a tale to be read and enjoyed slowly.

Yet ONCE UPON A RIVER is more than that. Setterfield is a performative author:  her light, interested voice runs alongside the plot, reminding us that fiction springs from the deep human need for stories. In particular, she shows how we carry the stories of the missing and the lost inside ourselves, telling and retelling them in our effort to understand. Furthermore, this thread is skilfully highlighted by the way that Setterfield lets the occasional traditional storytelling trope glint out at us from behind her “everyday” Victorian world.

But how does the story begin?
It is night at the start of ONCE UPON A RIVER and The Swan is crowded with folk ready to listen to the inn’s famed storytellers. Some of the audience are wary because, as the author repeats and repeats, they have been sensing that
Something is about to happen.
All at once the door crashes open and a monster with a bloody face walks into the room, dripping water.
“In its arms the awful creature carried a large puppet,
with waxen face and limbs and sickly painted hair.”
As the intruder collapses among helping arms, the inn-keeper's son catches the falling puppet:  he is holding the body of a drowned four-year-old girl. Nobody knows the identity of the man or child for sure, but suppositions and stories start and are carried away home by the departing drinkers.

When all is peaceful, the midwife tends to the man’s broken nose and gash of a mouth. However, returning to the tiny corpse, she senses something strange: a faint pulse flickering where no pulse was before. As if by a miracle, the dead girl revives. The innkeeper’s son cries out in witness of the moment.
I kissed her and she woke up . . . . It is like Jesus.
The pale child starts to recover but she does not speak. The question grows more urgent. Where does she come from and who should she belong to?

The novel offers three possible claimants - one more than for the judgement of Solomon - whose stories and thoughts are amplified  and cleverly intertwined within the telling.
- First, in the elegant house, with ample grounds and river frontage, live a married couple, each existing in separate agony, grieving for their infant daughter kidnapped two years before and never returned.
- Next, there is a well-to-do farmer - the son of a gentleman and a black servant - and his pretty, reclusive wife who long to find the grandchild they have only just learned exists.
- Last of all, living in cottage among the rushes, is a simple-minded housekeeper, mourning her lost sister and fearing the return of a brutish, secret visitor.

To whom does the child belong? Or are there others who would choose to look after and love the small, silent girl? By twists and turns, the stream of the novel deepens. The plot grows, meanders, turns back on itself, flowing closer and closer towards the final great whirl of disaster, misunderstanding, tragedy and reconciliation.

Along the way, ONCE UPON A RIVER picks up many well-rounded characters of the period:  the travelling photographer, the convent-bred midwife, the innkeeper and his extensive family, the enigmatic medium, the kindly parson, the runaway son, the jilted girl, the accused maid and more. Within the novel's four-hundred-and-more pages, the reader is offered a whole throng of the riverside community, along with a couple of nasty villains, a beloved goat and a fortune-telling pig.

Furthermore, floating through the tale, comes  the spectral ferryman Quietly. If you fall into the water and your time has not yet come, says the local legend, Quietly will rescue you and bring back to safety. Of course, if your time has come, Quietly will carry you in his ferry-boat to the far. misty side of the river. For some in this novel, as in life, that time will arrive.

ONCE UPON A RIVER is a memorable and haunting slow-burning novel, and is published in the UK by Doubleday this month. Diane Setterfield's two earlier novels are THE THIRTEENTH TALE and BELLMAN & BLACK. 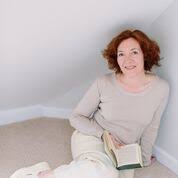 That sounds wonderful, Penny! -- Thanks for the review.

Thanks for this, Penny!

oh I do like the sound of this, on order :-) and requested through the library