The Plight of the Moriscos in 17th Century Spain

The Spanish Inquisition is associated with the persecution of the Jews but it is not common knowledge that Muslims were also tried and tortured by this institution. When researching A Divided Inheritance I took a trip to Seville and visited the remains of the San Jorge Castle, the place of imprisonment for victims of the regime. There I saw chilling evidence of this persecution, which the Inquisition applied not only to rival faiths to Catholicism but also to mystics of their own faith.

What made this climate interesting for my novel was that in seventeenth century England Catholicism was repressed, whereas in Spain Catholics were the ruling majority. To understand the climate of oppression for religious minorities in Spain in 1609, one must look back a few centuries to 1248, when Seville, formerly a Moorish city, fell to Christian armies.

.
Symbols of Lost Culture
During the following centuries after moorish Spain was conquered, Christians were determined to expand their dominion over Spain, and in 1492 Muslim Granada fell - a momentous day for Christian Europe, a day of rejoicing, but for Muslims it became a day of eternal sorrow. Precious buildings were sacked and destroyed, atrefacts such as ceramics with islamnic designs smashed.

Just as the day is marked by celebrations in Spain, in Morocco black flags are hung out to indicate loss and mourning. Some descendants of those expelled still retain the original 15th century keys of their Andalusian homes as a symbol of their lost culture.

After the conquest of Granada by Christians, the Jewish population was driven out, whilst tolerance was promised to its Moorish citizens. So by the seventeenth century the Moors had become indelibly Spanish. Some were genuine Christian converts, and many, like Sancho Panza’s neighbour Ricote (in Cervantes’ novel Don Quixote), and Luisa in my novel 'A Divided Inheritance', thought of themselves as ‘más cristiano que moro’ (More Christian than Moor).

The Burning of Books
A short period of relatively peaceful co-existence between the Muslims and Christians was shattered when the Archbishop of Granada, Hernando de Talavera, was replaced by the fanatic Cardinal Cisneros, and Muslim religious leaders were persuaded to hand over more than 5,000 priceless books with ornamental bindings, which were then consigned to bonfires. Only a few books on medicine were spared the flames. Unsurprisingly, this event led to an armed response from Muslims in the First Rebellion of the Alpujarras in 1499. By 1502 the monarchy had rescinded the treaty of tolerance and Muslims in Andalusia were forced to convert or leave. Those who converted were called Moriscos, which means “little Moors”.


A Secret Religion
Many Moriscos professed their allegiance to Christianity while practicing Islam in secret. Every aspect of the Islamic way of life, including the Arabic language, dress and social customs – was condemned as uncivilised and pagan. A person who refused to drink wine or eat pork, or who cooked meat on a Friday might be denounced as a Muslim to the Inquisition. Even practices such as buying couscous, using henna, throwing sweets at a wedding or dancing to the sound of Berber music were un-Christian activities for which a person might be reported to the Inquisition by his neighbour, and obliged to do penance.

Rebellion
Further repression of the Moriscos resulted in a second Rebellion. Fearing the rebels were conspiring with the Turks of the Ottoman Empire, the uprising was brutally suppressed by Don John of Austria. In a spate of atrocities the town of Galera, to the east of Granada, was razed to the ground and sprinkled with salt, after the slaughter of 2,500 people including 400 women and children. Some 80,000 Moriscos in Granada were forcibly dispersed to other parts of Spain, including Seville. Christians from northern Spain were settled on their empty lands. Ayamena and Nicoloao in my story were displaced from Granada before settling in Seville.

As early as the 16th century The Council of State proposed expulsion as a solution to the on-going Morisco 'problem', for which the previous expulsion of the Jews provided a legal precedent. However, the action was delayed because of Spain’s pressing political concerns abroad and because of the drawbacks of losing so many skilled Muslim labourers from the Spanish working population. Muslim labourers and artisans were responsible for much of the beautiful spanish architecture we admire so much today.

Juan de Ribera, the ageing Archbishop of Valencia, who had initially been a firm believer in missionary work, and the conversion of the Moorish population to Christianity, became in his declining years the chief partisan of expulsion. In a sermon preached on September 27th, 1609, he said that Spanish land would never become fertile again until these heretics (the Moriscos) were expelled. The Duke of Lerma, the corrupt chief minister agreed with him. The new king, Felipe III, known as Phillip the Pious for his supposed religious zeal, finally acquiesced to political pressure and in the expulsions began.

The embarkation order was read out in Seville on January 10th 1610. The entire Muslim population, along with anyone who had converted from Islam to Christianity, was ordered to leave Spain on threat of death. By 1613 it is estimated 400,000 people had been forcibly removed in this mass expulsion from Spanish territory.

This little-known part of seventeenth century forms one of the threads of the narrative in my novel,' A Divided Inheritance'. Read more in this excellent article by Roger Boase in History Today 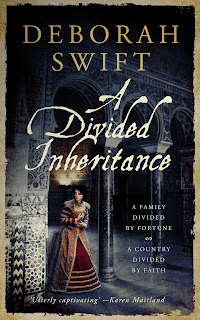