I have a lot of information about my two grandfathers and their antecedents, going back hundreds of years, and a certain amount about my paternal grandmother, but I knew little of the background of my maternal grandmother, other than that she came from Huguenot stock and that the family’s French name was Lafargue.

The origins of the word Huguenot are obscure but we do know that it was used as an insult. Huguenots referred to themselves as Reformers.

I came across a whole chapter about the Lafargue family in the proceedings of the Huguenot Society and was captivated by the story of ‘the brave widow’ Lidie Grenouilleau de Lafargue who fled to England with her three young children in 1692.

I'll come back to Lidie later.  Hers is only one among many stories of families who fled persecution, part of the great wave of French Protestant migration (over 50,000) that transformed London - and England.

The impact of the Protestant Reformation was felt throughout Europe. In France, Calvinism penetrated all ranks of society, especially those of the literate craftsmen in the towns and of the nobility. Between 1562 and 1598   there were eight civil wars in France - the Wars of Religion – between Catholics and Protestants.


Of the many attacks against Huguenots, probably the St Bartholomew's Day Massacre is the most notorious.  Traditionally believed to have been instigated by Catherine de Medici, regent at the time, the massacre began on the night of 23/24 August 1572, a few days after the wedding  of the king's sister Margaret to the Protestant Henry III of Navarre (the future Henry IV of France). Many of the most wealthy and prominent Huguenots had gathered in largely Catholic Paris to attend the wedding and the attacks quickly spread from Paris to other areas. Modern estimates for the number of dead across France vary widely, from 5,000 to 30,000.

In 1589 the Protestant Henri de Bourbon inherited the French throne, and in a bid to put a stop to these civil wars, in 1593 he converted to Catholicism.  Five years later he issued the Edict of Nantes which gave the Huguenots considerable privileges, including widespread religious liberty.

For some years after this the Huguenots thrived but their position became increasingly insecure when Henri’s grandson, King Louis XIV, came to power. His advisers warned him that the existence of this sizeable religious minority was a threat to the absolute authority of the monarch so gradually the Huguenots' privileges were eroded.

In the 1680s Protestants in certain parts of France were deliberately terrorised by the billeting of unruly troops in their homes ['the Dragonnades']. Finally, in 1685 Louis revoked the Edict of Nantes, exiling all Protestant pastors and at the same time forbidding the Protestant laity to leave France.


However, to the considerable surprise of the government many did leave, often at great risk to themselves. Men who were caught were either executed or were sent as galley slaves to the French fleet in the Mediterranean, women were imprisoned and their children sent to convents. About 200,000 Huguenots left France, settling in non-Catholic European countries and further afield. 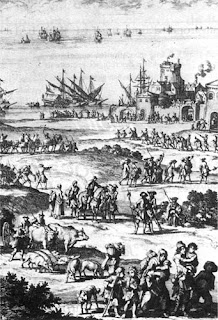 The great majority of these ‘refugees’ (a new word, coined to describe the incomers) who came to live in towns in Protestant Europe were artisans. Those who came to England included many skilled craftsmen -  weavers, silversmiths, watchmakers, bookbinders – as well as professionals such as clergy, doctors, merchants, soldiers and teachers, There was also a small sprinkling of the lesser nobility. By and large these refugees were received with sympathy and kindness because of the skills they offered and because of anti Catholic sentiment at the time.

But to go back to the brave widow. Lidie Grenouilleau married Samuel Lafargue in 1684. At the time of her marriage she was 20 and her husband, an avocat, 24.  The family of Lafargue had for some generations made their home in the town of Castillon-sur-Dordogne not far from Bordeaux. Castillon had long since lost its strategic importance and had become the home of many well to do Protestant families who asked for nothing more than to be left in peace. Samual’s father, Samual de Lafargue, the elder, Docteur en Medecine, was a wealthy man from an ancient and noble house which for generations had been faithful to the Protestant cause.  Indeed, many Lafargues had sacrificed their lives for their faith in the turbulent religious wars.

Then, with the revocation of the Edit of Nantes on 22ndOctober 1685, abjurations (renunciations) began to be enforced.  In the jurisdiction of Castillon, there are numerous records of ‘new converts’. However, it seems that the Lafargues held out for longer than most, for with one exception, their names as ‘new converts’ don’t occur until 1688, 1689 and 1692.

Samuel Lafargue, Lidie’s husband, died on 8thAugust 1692, the very day on which his ‘conversion’ was recorded. Who knows how he died, but this is, at best, a sinister coincidence. In those dark days it was not uncommon for Huguenots to die shortly after their ‘conversion’ and in that year a new wave of persecution had overwhelmed the region. Houses were razed to the ground, children torn from their parents, women imprisoned and men slaughtered.

Surrounded by these horrors, the only way Lidie could retain her religious liberty and save her children, was to flee.

Only a few years previously, she and her friends and relations had been part of a tightly knit, supportive community, free to worship God in their own way. Now, death, flight or renunciation had shattered that community.


I can find no record of how Lidie escaped, but it can’t have been easy travelling with three very small children and her widowed mother.  She had succeeded in rescuing a small amount of her husband’s fortune and we know that she took with her some diamonds, plate and trinkets, among them an old silver seal engraved with the de Lafargue arms, together with four family portraits, apparently ‘by a master’s hand’. 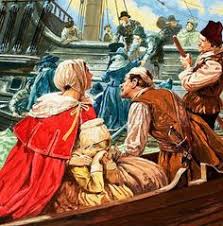 With little else to remind her of home, Lidie settled down at first in Westminster but eventually in a house at Hammersmith.  What chiefly attracted her to this quiet suburban area was that it was the home of a small Huguenot colony and had in it one of the few French churches outside the city, of which she became a loyal member. She would have certainly needed her faith to sustain her when two of her three children predeceased her.
Lidie lived in Hammersmith until her death, forty years after she had first set foot in her adopted country.


That she was a kind, charitable and devout woman is evident from her will which opens with an earnest expression of Evangelical faith.  She left the bulk of her property to her surviving son, Elias, and the rest to charities for the French poor in London.  The omissions from the will are saddening. There is no mention of any of her kinsfolk in France and we are left with the impression that hers was a rather lonely life.  Her son and his wife lived miles away and she seldom saw them and she only seemed to have a few acquaintances. It must have been so different from the warm and cheerful days of her early marriage spent among all her Gascon friends and relations in Castillon.

Lidie’s son Elias became a clergyman and married the daughter of a fellow refugee (originally from Normandy) and after 14 years ministering to a quiet parish in Lincolnshire, when nearly 50, he finally became a father.  His son, Peter, did not marry young but he married wealth – twice – so that, although he was a clergyman, like his father, he had no need of a living. Peter’s two children from his first marriage rescued Lidie’s family in England from extinction and now there are hundreds who have her as their common ancestor.
One of these was my grandmother.  Known in the family as ‘naughty grannie’ I have to say that she inherited neither Lidie’s piety nor her generosity – though she certainly had some adventures.


But that’s another story!

Thank you to Rosemary Hayes for her reserve post as one of our number copes with a bereavement.

My paternal ancestors were Huguenots, who also eventually settled in Lincolnshire, via Liverpool...

Thank you for this, Rosemary! My Huguenot ancestors moved to Scotland - a journey I made myself 40 years ago, though mine was for adventure rather than need. May we always be a country that takes folk in. Sigh.

Oo, DO tell the story of Naughty Grannie, Rosemary!

Fascinating! How lovely to have such an interesting family! But oh dear, what awful things we human beings do to each other.