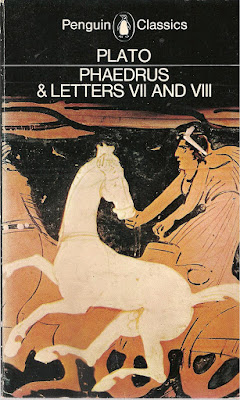 Do you remember Penguin Classics – that fantastic collection of black-liveried paperbacks comprising translations of classic literature from all over the world?  They still exist of course, though redesigned: and they still retain their black jackets, but I began buying them in the 1970s as a teenager, and with their assistance and entirely for pleasure read my way through much of Plato, Sophocles, Aeschylus and Euripides. Call me a nerd, but there was a time when on solitary hill walks (yes, they would have had to have been solitary!) I used to parody the charmingly stilted effects (at least in translation) of Socratic dialogue, for my own amusement:

...and soon, once Socrates has established that for information about birds you would visit an ornithologist, and for details of the lives of celebrities you would buy Hello magazine, and that you would be disappointed in a shepherd who knew nothing about sheep, you find yourself agreeing that a statesman or stateswoman really ought to possess some notion of the Good, and of Justice and the  Laws. Both Plato and Socrates held opinions about about democracies, and neither would have approved of referendums:

‘So you would expect a ship’s master to be knowledgeable about seamanship?’
‘I would, indeed, Socrates.’
‘In fact you would expect him to know much more about it than his passengers and crew?’
‘Of course: he would not be qualified to command if he did not.’
‘And you would be surprised if, instead of guiding the ship himself, he asked everyone on board to decide how he should steer and what landfall to aim for, even though they had no experience of the winds, the currents, the coast or the rocks?’
‘I would suppose the gods had struck him mad, Socrates!’

See? You can find yourself wandering off into all sorts of unrealistic places.

It was possible to pick up a pretty good education simply by choosing one title after another from those blocks of severe black which occupied prominent shelf-space in nearly all bookshops. They were by no means all about the Greeks. Courtesy of Penguin Classics I discovered poems by Li Po, haiku by Bashō, and the writings of the eleventh century Japanese lady Sei Shōnagon, whose ‘Pillow Book’ has to be one of the most urbane and delightful books in the world.

Shōnagon was born around 965, according to Ivan Morris’s introduction to the book (all quotations below are taken from his Penguin translation). She acted as lady-in-waiting to the Empress Sadako at the court of the mid-Heian emperor Ichijō. This was a fascinatingly cultured and civilized court. At a time when in England, Ethelred the Unredy was trying to buy off the Vikings, and literacy was the province mainly of monks, in upper-class Heian Japan it was impossible even to function socially, still less conduct a love-affair, without the ability to compose at a moment’s notice impromptu verse written in beautiful calligraphy on coloured paper, complete with allusions to classical Chinese poetry. 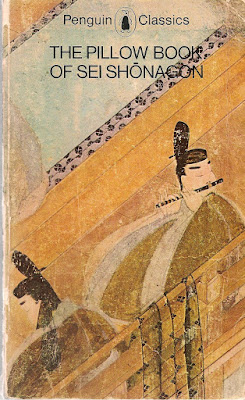 Although at the time upperclass Japanese men and women were both literate, the men tended to get that extra bit of education. They learned Chinese for exactly the same reasons that men in the West learned Latin. The result: they themselves wrote in Chinese and their work remained derivative, while the women wrote in their own native tongue and composed lasting works of literature. Murasaki Shikibu’s immensely long and wonderful novel ‘The Tale of Genji’ dates from this period: she was a contemporary of Sei Shōnagon, and disliked her.

Sei Shōnagon has the most extraordinary air of self-satisfaction… She is a gifted woman, to be sure. Yet, if one gives free rein to one’s emotions even in the most inappropriate circumstances, if one has to sample each interesting thing that comes along, people are bound to regard one as frivolous. And how can things turn out well for such a woman?

How very Jane Austen that sounds! Anyway, Shōnagon’s ‘Pillow Book’ is a collection of miscellaneous writings bundled together over about ten years’ worth of observations. They range from gossip and scandal, to the beauties and sorrows of the world, to mundane things like the extraordinary way the lower classes shovel in their food (yes, she was a snob). One of her most fascinating habits is the occasional interspersion of lists of various things with different qualities. Like this:

Things That Give a Clean Feeling
An earthen cup. A new metal bowl.  A rush mat. The play of light on water as one pours it into a vessel.  A new wooden chest.

Squalid things
The back of a piece of embroidery.
The inside of a cat’s ear.
A swarm of mice, who still have no fur, when they come wriggling out of their nest.
Darkness in a place that does not give the impression of being very clean…

"The back of a piece of embroidery..." Yes, yes and yes! If you don’t know her already, you will find Shōnagon a wonderful companion. In the meantime, since we might as well take our minds off things while the ship of state veers towards the rocks with the passengers and crew all fighting like cats in a sack, here in Shōnagon’s honour is a list of my own.

Things which are pleasant to use:

An old-fashioned rotary push-along lawnmower: the whirring noise and the way the grass clippings pour in green showers  off the blades..

A rotary egg-whisk: the double sort you wind with a handle.

A really sharp pair of scissors, with the crisp snark-snark sound they make as they cut through cloth.

A ratchet screwdriver: the clickety, clockwork sound of the ratchet and the way each twist of the hand adds to the last.

A good fountain pen freshly filled with black ink: the nib swims over the paper leaving a shining trail and  you feel as though what you have written must be good…

A clean block of white paper.

A fresh eraser as soft as a mushroom: the tingling dusty feel under your fingertips, and the way it shreds at the corner when you begin to rub out.

Pleasant to use? Mine would be a freshly-changed bed with sheets smooth and unwrinkled, and still smelling of summer breezes and sunshine, the pillow cool and marshmallow soft, and the knowledge that you have a whole eight hours to revel in it before you have to start work again.

Thank you for such a lovely blog to muse on.

The smell of pavement just after a spring rain.
The look of a cat just before it pounces.
The sound of happy children playing in the backyard.
The velvet soft of fresh flower petals.
The ritual of boiling water and steeping for tea/coffee in the proper pot.
The sparkle of sunlight through a crystal prism.
The verdant green and gently pungent smell of paperwhites growing in a winter window.
The indignant chitter of a hoity hummingbird when you get to close to it's feeder, never mind your replacing its water.
The sound of a freshly oiled sewing machine as your fabric glides under the feed-dogs.
The satisfied purring of a pampered cat as you brush its furz in the morning.

the purr of a content cat,
the smell of a freshly made bed,
waking and turning over for sleep as you don't have to get up for ages!
a finished craft item, knitted, crocheted or sewn!
sat in the garden with a drink and some knitting in the sunshine or shade.
crunchy morning full of fresh fallen snow underfoot.
the feeling of finishing a morning run with a friend!

I will add I was taught to embroider by an elderly Aunt who took my work out if the back didn't look as good as the front! took ages to get my first piece done but I try to make everything I finish was good to look at from either side.

The feel of freshly-washed clothing on newly-bathed skin.
Fields of snow before any person walks in them, leaving footsteps (animal footsteps are fine; this even makes the scene more pleasant).
Rabbits sitting in the sun.
Knowing there is not only sufficient food in the pantry; but food one actually looks forward to eating.
Fields of sheep.
Realising one has no need to leave the house while a storm rages outside.
The first holiday decorations one sees.
The last holiday decorations one sees.
Birds drinking and bathing in a stream (must be moving water; ponds won't do)

Other than the 'snow', these appear rather mudane...

These are so lovely! Thankyou all so much.