Height and Light by Kate Hubbard

Our guest for January is Kate Hubbard. She is interviewed here by Charlotte Wightwick.
Kate Hubbard has worked variously as a researcher, teacher, publisher's reader, freelance editor and book reviewer. She currently works for the Royal Literary Fund as a Royal Literary Fellow. Her first book, A Material Girl: Bess of Hardwick, 1527–1608, was published in 2001. She is also the author of Serving Victoria: Life in the Royal Household, which was shortlisted for the Costa Biography Award. Kate divides her time between London and Dorset. Her interest in Bess of Hardwick began with her love for Bess’s only surviving house, Hardwick Hall.
A few months ago Mary Hoffman reviewed a book on this site called Four Queens and a Countess. At the end she said,"Bess of Hardwick remains the real star of this book and I'd love to read a book just about her. She was one of the most remarkable women to emerge in Renaissance England and lived a life as eventful as any queen's."

Kate Hubbard has granted that wish!
CW: Your book is both a biography of a woman and an account of the explosion of Elizabethan grand domestic building. Why did you choose to explore these themes together?

KH: I particularly wanted to write about Bess as a builder, something I felt hadn’t been much explored in previous biographies. Elizabethan England was of course a great era of building, but as a woman builder Bess was unique - building was generally the preserve of men. I felt Bess's four houses - Chatsworth, the Old and New Halls at Hardwick and Owlcotes - could tell us something about her - her pride, her ambition, her ego, her love of order and height and light. Bess started work on Hardwick New Hall as a widow of nearly seventy and that in itself seemed remarkable to me. And the fact that she chose to plaster her initials - ES - all over the house, outside and in.

CW: Why do you think so many of the Elizabethan nobility turned to architecture as a way of displaying status?

KH: For the Elizabethan nobility houses were visible manifestations of wealth and status. If you’d made a fortune, you built a house, and ideally a bigger and better and more extraordinary house than your neighbour. Glass, for example, was extremely expensive, so few could afford the kind of vast windows that you see at Hardwick (Sir Christopher Hatton and the Earl of Leicester also built ‘lantern houses’ - houses with great expanses of glass). Architecture was also a means of displaying wit - Elizabethans loved puzzles and riddles - houses built in the shape of a letter, or designed on geometric principles (like Hardwick). The more ingenious the design, the more admirable and covetable. Interiors were important too - it actually cost more to furnish a house than to build it - and the quality of your tapestries and hangings said as much about your income as your taste.
CW: How far was Bess an unusual woman for her day and class? Was she the exception or do you think we just know more about her given her political connections and the survival of Hardwick?

KH: Bess’s life is of course particularly well documented, but I think she was unusual for her time, and class. She came from a gentry, not an aristocratic family and she didn’t have the benefit of a fine humanist education, like many noble-born Elizabethan women. There were other powerful Elizabethan women, at least powerful in the realm of the domestic - women who managed their husbands estates for example - but Bess was certainly unusual as a business woman. And she was a very canny one. She amassed quite an empire of land and property, coal and lead mines, glass works etc. and she had a very lucrative sideline in money-lending.
CW: As well as illuminating Bess' life, Devices & Desires also provides a vivid insight into the daily lives of the workmen and others who worked on her buildings. How far was this important to you when writing it?

KH: I wanted to give a sense of daily life, as lived by Bess, her family, servants and workmen. Many volumes of Bess's household and building accounts survive and they tell us a great deal about what was being bought and eaten and worn, who was being paid what etc. It’s a great help that these accounts have all been transcribed - otherwise reading them would be almost impossible task.

CW: What was the most enjoyable or unusual part of researching the book? Was there anything that surprised you?
KH: I much enjoyed staying at Hardwick during the research and writing of the book. Not in the house itself - sadly! - but in a lodge in the ruins of the Old Hall, which is as close as you can get. Every morning I would open the curtains and there would be Hardwick, rearing up before me, lit up by morning sun. It was particularly nice to be there after hours, when the National Trust visitors had gone home, and when I was occasionally allowed to wander around the house on my own. And I also loved visiting other Elizabethan houses, especially Smythson (Robert Smythson provided a plan for Hardwick) houses, in and around Derbyshire. 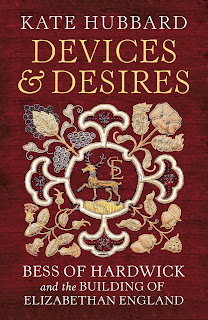 Many thanks to Charlotte Wightwick and Anna Redman of Vintage for ensuring this guest posr went up on time. And of course to Kate Hubbard for the interview