Along my book tour, a return to James Herriot Country, by Carol Drinkwater

I am in the north of England promoting my new novel, THE HOUSE ON THE EDGE OF THE CLIFF, which was published last week, 16th May.

Yesterday, my stop was organised by the White Rose Book shop in Thirsk. The event was held at the Rural Arts Centre, which is a rather lovely location in this fine old market town. My B & B accommodation was ten steps from the Herriot Museum. The Herriot Museum stands as a memorial to  the veterinary surgeon, Alf Wight, who practised his animal wizardry for almost his entire career here in this once-remote location. Agricultural England. Thirsk remained the home of his practice even after he had become a world-wide sensation with his series of memoirs recounting his life working in the Yorkshire Moors.

Alf was born in Sunderland in 1916. He died in Thirlby four miles outside Thirsk in 1995. By the time he passed away, Alf, whose pen name was James Herriot, was an an international sensation. Not only had his books sold by the millions in English and translation everywhere in the world, they had been the inspiration for two cinema films, ninety episodes of television plus two television 'specials', Alf brought recognition to this area of Yorkshire. Like almost no other - until perhaps The Hobbit films shot in New Zealand - Alf quite literally transformed the impact of tourism on north-east England. It is over forty years since we began shooting the TV series and The Herriot trail remains big business today.

Alf with his wife, Joan. Joan was the inspiration for the character of Helen, the wife of James Herriot in the books. The role that I had the good fortune to play.

Principal cast of the TV series All Creatures Great and Small. The actors surrounding me are (anti-clockwise) Mary Hignett, Peter David, Robert Hardy and Christopher Timothy.

Our filming actually took place in the Yorkshire Dales rather than the Yorkshire Moors so I didn't have many opportunities to visit Thirsk back in the days when I was shooting. We came over to have dinner from time to time with Alf and Joan and I have been to Thirsk since the series finished. In 2016, the cast came together along with many locals and admirers from all over the world to celebrate the centenary of Alf's birth. It was a very special occasion, not least because it was the last time we all had dinner with the late Robert Hardy who died in August 2017.

This week when I stepped off the train, Thirsk was bathed in warm sunshine.  A glorious mid-May day. My event for THE HOUSE ON THE EDGE OF THE CLIFF was scheduled for 7.30 pm. After signing boxes of books at the White Rose bookshop, I was free to wander the market town.
My digs for the night, Kirkgate House is a Georgian property sitting in between The World of James Herriot Museum and a magnificent privately owned home.

23 Kirkgate was the original address for the veterinary practice of James Herriot/Alf Wight, known in the books as "Skeldale House". It is packed with memorabilia and also displays a part of the set we used for the TV series of All Creatures Great and Small. I popped in to say hello to everyone but I find walking around it an emotional experience. It is rather like taking a walk through one's own past.

St Mary's Church is a fifteenth century parish church just along the street. I wanted to pay a visit. I have never had an opportunity in the past. Its interior is really rather lovely. Stained glass windows depicting St George and the Dragon. It has an organ, eight bells in the tower. 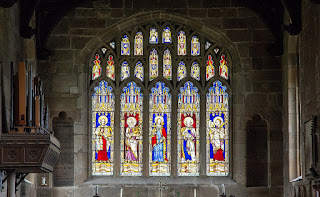 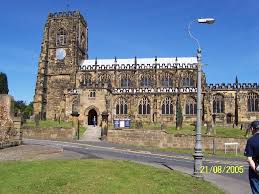 Alf and Joan - James and Helen - were married in this church as was their daughter, Rosie, I read.

The next stop was York. I had forgotten how beautiful this city is. I was talking at St Peter's School, one of the oldest schools in Britain, founded by St Paulinus of York in 627 AD on the banks of the River Ouse. It is the third oldest school in the UK and the fourth in the world. A magnificent setting. It was a memorable event and I felt honoured to be invited there to talk about my books and travels.  Afterwards, I had my photograph taken with a portrait of the very handsome Guy Fawkes who was an Old Peterite, a student at the school. Fawkes was born in Stonegate, York in 1570 and executed in London in January 1606. He was, of course, involved in the failed Gunpowder Plot.

I am on the train now to Peterborough heading to the Deepings Literature Festival. Deepings is a place I had never heard of, in Lincolnshire. Two days to discover a new - to me - patch of England while I talk about and read from THE HOUSE ON THE EDGE OF THE CLIFF.

As I write the novel is being offered at half price here
https://www.amazon.co.uk/House-Edge-Cliff-Carol-Drinkwater/dp/1405933348/ref=tmm_pap_swatch_0?_encoding=UTF8&qid=&sr=

And can be found in all good bookshops. I hope you will look out for it. 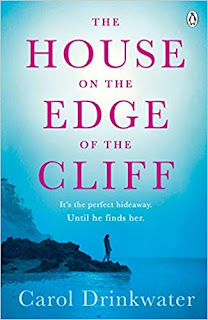 What a lovely post! I was and am, a big fan of "All creatures" as my husband and I call it. Loved the TV program and it actually inspired my husband to read the books which was a major achievement back in the day. Always loved the look of the area even in bad weather. Thanks so much for my walk down memory lane. TV could use a few more programs like this.

Interesting to read this Carol and glad to hear you are enjoying your book tour.....thanks for the tip on the special price for your latest book which I have eagerly ordered and will pack in my suitcase when it arrives, to enjoy reading when we are next in S. of France in July.