At the end of April, we had a few days down on Exmoor, venturing just over the border from Somerset into Devon. Unfortunately, a heavy bank of rain (closely followed by Storm Hannah) was paying a visit at the same time - but in fact that turned out to be a Good Thing, because it led us a National Trust house nearby called Arlington Court. We'd never heard of it, but were delighted to have come across it.


Relatively speaking, the house isn't huge - but it's packed full of interesting things. The last owner, Miss Rosalie Chichester, was a great collector, and she left everything to the Trust.

Her father, Sir Bruce, died when she was only 15. Until he became ill, he had lived lavishly, spending money he didn't have on the estate and on entertaining - so that Rosalie inherited a hefty burden of debt, as well as the house and its acres of parkland. There's a room upstairs which is furnished to reflect her personality and interests at this point. She had her two pet mice stuffed when she died, and there they are, encased in small glass cases on the mantelpiece. There are books, toys, drawings and pictures; it's a comfortable, slightly shabby room, and you get the impression of an eager, enthusiastic personality, a girl who loved her home but was also curious about the world beyond.

As the owner of an estate which was saddled with heavy debt, she was never going to attract swarms of suitors, and she never did marry. But it doesn't seem to have bothered her: she certainly didn't become a reclusive, quiet spinster. She was careful with the estate, cancelling her father's extravagant plans for expansion, and over a number of years she managed to pay off the money owed. In any case, she had her own ideas about what she wanted to do with the grounds in particular.

For a start, very unusually for this part of the world, she was adamantly against hunting. So she had an iron fence erected round the park: it was to be a safe haven for deer and any other animals which chose to seek refuge at Arlington. In order to study the natural world which she loved, she had an observatory built. She was also a keen photographer, and some of her pictures form a slideshow of the estate as it was at the beginning of the 20th century

As time went on and the debts began to clear, she used the extra money she now had at her disposal to  travel widely with a paid companion. You can see at the house some of the journals she wrote; there is one of New Zealand illustrated with lots of sketches of the people, places and things that she saw.

She was a keen collector, and she used one room in her house as a museum for all the curiosities she ammassed. Its glass display cases are crammed with pewter mugs, pretty china, masses of exquisite shells - and model ships. Her grandfather had been a sailor, and her nephew, Sir Francis Chichester, was to become famous for being the first man to circumnavigate the world by himself. For her part, she expressed her interest in matters maritime by collecting the most beautiful models of ships of all kinds, and they are to be seen all over the house. This one is made out of spun glass: another was made by French prisoners of some war or other - the ropes are made of tightly woven human hair. 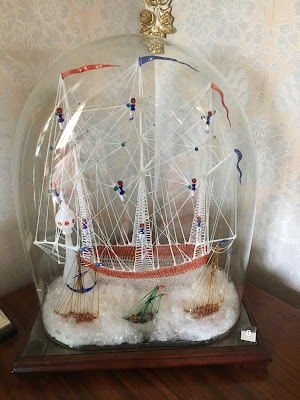 The house, bright and comfortable, full of what some might call clutter, surely reflects its last owner's personality: lively, interested in everything, cheerful and creative. I suspect she would have been great company.

There's also a lovely little garden (which naturally needed to be walled because of all the animals), which at the time we were there was splashed with vivid pink and crimson azaleas. In the wider parkland there were lovely drifts of pale blue camassias. 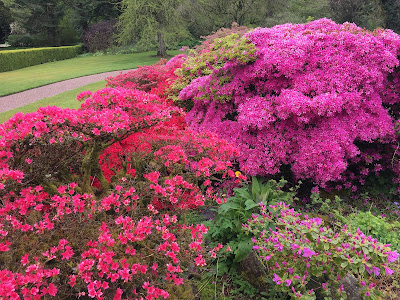 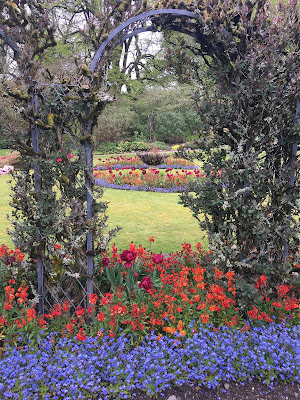 The National Trust has its carriage museum there too - so if you ever want to know exactly what a brougham, a phaeton, a gig or a mail coach looked like, this is the place to go. The centrepiece of the collection, which is the only thing one is not allowed to photograph, is the Speaker's Coach, a vision in gold, extraordinarily ornate, straight out of a fairytale. The last speaker to have used it was George Thomas, later Lord Tonypandy - a lad from the Welsh valleys, who must surely have reflected, as he rode in it, how very unexpected and various life can turn out to be.
Posted by Sue Purkiss at 03:00

Grew up near here, when I learned to drive this was often a destination that wasn't too far away or too expensive but worth a visit. Being a horsey girl I loved the carriages, saw the yachts and maritime stuff but spent more time admiring the horses for the carriages and gigs! so wanted one as a child! This and A La Ronde near Exmouth were my go-to trips in my older teen years. Glad you enjoyed it.

Thank you Sue, a reminder that we really must go back to Arlington soon! I'd forgotten how lovely it is. Do you still have to ring the doorbell to be allowed in?

Yes, Ruth, you do! Thanks for your comment, Ruan.