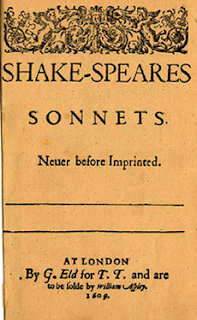 "My mistress' eyes are nothing like the sun;
Coral is far more red than her lips' red;
If snow be white, why then her breasts are dun;
If hairs be wires, black wires grow on her head.
I have seen roses damask'd, red and white,
But no such roses see I in her cheeks;
And in some perfumes is there more delight
Than in the breath that from my mistress reeks.
I love to hear her speak, yet well I know
That music hath a far more pleasing sound;
I grant I never saw a goddess go;
My mistress, when she walks, treads on the ground:
And yet, by heaven, I think my love as rare
As any she belied with false compare."

This was probably the first "Dark Lady" sonnet you ever read or heard of and it is well used in the play Emilia,* currently showing at the Vaudeville theatre in London's West End and written by Morgan Lloyd Malcolm. She takes the facts known about Emilia Bassano, or Lanier (or Amelia, Aemilia, Lanyer and many variations thereof) and "fills in the gaps."

The play is a triumph of positivity about women finding and using their voices in the past and now and brings audiences to their feet at every performance.

Emilia Bassano is just one of the many candidates proposed to have been Shakespeare's Dark Lady, to whom a couple of dozen of his sonnets are written. Here are some of the others:


1578-1647, a maid of honour to Queen Elizabeth the First, Mary Fitton certainly had an eventful sex life, giving birth to the illegitimate son of William Herbert, Earl of Pembroke and three other illegitimate children before marrying the father of the last, a son. In the late 19th and early twentieth century Mary was a top choice as Dark Lady, since Herbert was prime candidate for "Mr W. H." the dedicatee of the sonnets.

The theory was scuppered, according to Stanley Wells and Paul Edmondson in their book Shakespeare's Sonnets (2004): "her star waned when she was discovered to have been fair." I don't know, she doesn't look very fair in her portrait above, painted in about 1595.

George Bernard Shaw wrote a play called The Dark Lady of Shakespeare's Sonnets, with Mary Fitton as the woman in question. However, there is no evidence that Mary Fitton knew Shakespeare.

Jane Davenant
Jane was the wife of an Oxford innkeeper, at whose inn, the Crown, Shakespeare sometimes stayed en route between London and Stratford. There was a rumour that Shakespeare stood as godfather to Jane's son, William. And more than a rumour - a claim made by the man himself - that William was in fact Shakespeare's son, born in 1606. The claim was also made by Arthur Acheson in his book Mistress Davenant:the Dark Lady of Shakespeare's Sonnets (1913). And it is true that the Earl of Southampton had also stayed at the same inn and would have met Jane.

In Shakespeare among the Courtesans (Ashgate 2012), Salkeld returns to the theories of G B Harrison in his book Shakespeare at Work (Routledge 1933) that the Dark Lady was a Clerkenwell prostitute also known as Black Luce or Lucy Negra. He bases this on a connection he has found to Philip Henslowe of Gilbert East, who was an associate of Lucy Negra's.

Aline Florio (Jonathan Bate, Dr Aubrey Burl)
Jonathan Bate in The Genius of Shakespeare (Picador 1997) plumps for the wife of John Florio, who he declares to be nameless. Since so many writers since have produced the forename Aline, I have used it here. It's certainly true that Shakespeare knew Florio. And that Florio was Southampton's language tutor, so a part of his household.

In Shakespeare's Mistress: The Mystery of the Dark Lady Revealed (Amberley 2012), the archaeologist Aubrey Burl reviews the usual suspects and he too goes with "Mrs Florio."

Earl of Southampton himself (S. C. Campbell)
This one is right out of left field but Campbell, in her otherwise excellent book, Only Begotten Sonnets (Bell & Hyman 1978), suggests that the Dark Lady was just another aspect of the young man Shakespeare wrote the sonnets for. - his shadow self. Take a look at the poem this post started with, above, and see if you think this theory has legs, let alone breasts.


But to return to Emilia Bassano, her role was championed by A. L. Rowse in 1973 in his book Shakespeare the Man (HarperCollins) but with very little evidence.
The known facts are few: Emilia was born in 1569, the daughter of Baptista Bassano, a Venetian court musician, and Margaret Johnson. Her father died when she was seven and, when she was eighteen, Emilia became the mistress of Henry Carey, Baron Hunsdon, who was Lord Chamberlain to Elizabeth l.

Now this Henry Cary was certainly the son of Mary Boleyn and possibly even the son of Henry Vlll, who had an affair will Mary before his interest passed to her sister Anne. So Henry was at least first cousin and maybe half brother to Queen Elizabeth.

He was much older than his half-Italian mistress and he did not offer to marry her. Emilia was instead married off to her cousin, Alfonso Lanier, another court musician. The marriage does not seem to have been a happy one but Lanier brought the child up as his own son. A second child, a daughter, Odillya, was born five years later, after Carey's death, but died before the end of her first year.

Shakespeare's Sonnets were first published in 1609 and Emilia's volume, Salve Deus, Rex Judaeorum was entered into the Stationer's Register the next year. It was published in 1611, Alfonso died in 1613 and Shakespeare in 1616. Emilia's son Henry Lanier died in 1633 but Emilia lived on to 1645.

From these bare bones, Lloyd Malcolm has created a drama in which her heroine has written ever since she was a child, meets Shakespeare and even has her second child by him, and gives him inspiration not only for the sonnets but several of his plays.

It's an all female cast, with Emilia played by three different actors representing different stages of her life. (Charity Wakefield, Mary Boleyn in the TV adaptation of Hilary Mantel's Wolf Hall novels, has a nicely comic turn as Shakespeare).

The desire for publication and recognition of her own voice is what drives this version of Emilia. She teaches other women from "south of the river" (which gets a laugh), ordinary washerwomen, who use their literacy to write their own pleas for acceptance and equality. Their work showers down on the audience.

Although Shakespeare and Lord Chamberlain (Shakespeare was a Player in The Chamberlain's Men) appear in the play, there is no mention of the Earl of Southampton, the now generally agreed dedicatee of the main sonnet sequence, who appears also to have had an affair with the Dark Lady.

Clare Perkins, who plays the older Emilia, ends the show with an impressive rallying cry for women to go out and create and demand their place in the world. It's perhaps a pity that the playwright sees equality mainly in terms of women's anger but it is a strong ending and one that audiences relate to.

It certainly works as a piece of theatre.

* Full disclosure: my daughter Becky Barber-Sharp is Associate Producer for NB Productions on this show, which runs at the Vaudeville in the Strand till the end of May.