And so, in honour of Mothers’ Day I thought I’d share an edited version of a letter my mother wrote to her oldest nephew (my cousin, now almost 90 himself) some time in the 1980s about her parents and her childhood in the Western Australian mining town of Kalgoorlie.

My mother always said that Kalgoorlie bred special people. They certainly had to be hardy. Kalgoorlie-Boulder, usually known as just Kalgoorlie, is located 595 km (370 mi) east-northeast of Perth at the end of the Great Eastern Highway. The city was founded in 1889 and developed during the Coolgardie gold rush, on Western Australia's "Golden Mile".

The concentrated area of large gold mines surrounding the original find by Paddy Hannan in 1893 is often referred to as the Golden Mile, and was known at one time as "the world's richest square mile of earth". During the 1890s, the Goldfields area boomed, with a population exceeding 200,000, composed mainly of prospectors. The area gained a notorious reputation for being a "wild west" with bandits and prostitutes.

It was around this time that my mother's family (who were teetotal Methodists) arrived from Goulburn in New South Wales and set about making Kalgoorlie their home. 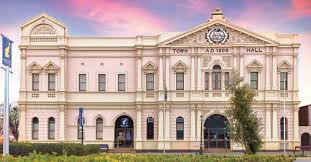 Mum's grandfather, Richard Everett, was a master mason, and may have had a hand in building some of Kalgoorlie's landmarks such as the Town Hall (above). He brought his family with him to the frontier town: Wilfred (23), Louisa (20), Alice (17), Albert Victor (15), Ida (13) and Clara (10). The oldest girl, Amelia, was married and stayed behind in Sydney. 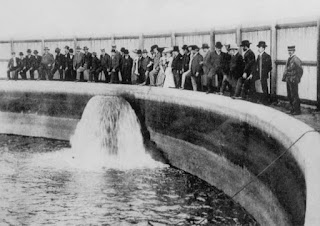 Mum's family arrived before the opening of the ‘golden pipeline’ (commissioned in 1896 and was completed in 1903), a major engineering feat by which 23,000 kilolitres (5,100,000 imp gal) of water per day flowed to the Goldfields from Perth. Prior to this there was no proper water supply to the town.

My grandfather met the Everett family when they were in Perth getting ready to go to Kalgoorlie in around 1898-9. He fell hard for Louisa, threw over his job, and followed her. They married in 1903.

Although the railway line reached Kalgoorlie in 1896, but it wasn’t until 1917 that a line was built across 2,000 kilometres (1,243 mi) of desert to connect Kalgoorlie to Port Augusta in South Australia and consequently to the eastern half of Australia. 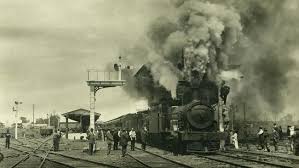 The first train heading east from Kalgoorlie in 1917

A sense of the small-town atmosphere is given by this article in The Kalgoorlie Miner of 17 March 1933, when Mum was 13 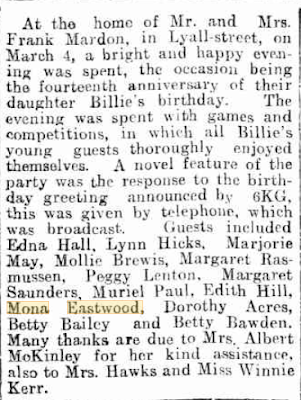 My father was James Wilkinson Eastwood (b.Everton, UK 1872, d. Kalgoorlie Australia 1923). He came out to Australia from Liverpool, England, sometime in the 1890's to take up a clerical position with the W.A. Government Railways at Fremantle. He worked in the
Fremantle office of the Railways until September 23rd, 1899, when he left to follow my mother to Kalgoorlie, where she had travelled with her family.

This date was revealed to me from a little job locket (or watch fob) given me by my mother as a keepsake of my father. It bears the inscription: -
"W.A.G. Rlys
Presented to J.W. Eastwood Esq. as a token of esteem by his fellow employees, Fremantle, 23.9.99"

In January 1902, when my mother was 23 and my father 29, they married and took up residence in the house built for them in Campbell Street, Kalgoorlie. This is still occupied, though somewhat changed in appearance by the enclosure of the front verandah and cutting down of tall peppercorn trees planted by my father. 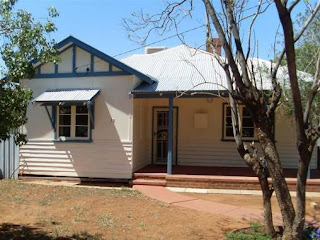 The house was similar to this one.

He worked as an Accountant in an office in the Exchange Building, Hannan Street, Kalgoorlie.
When his youngest brother, George Douqlas Eastwood (26) was killed at Gallipoli, my father joined the Australian Infantry Forces. He was then 43 years old and lied about his age to join up, leaving my mother with four daughters aged 4 to 12 years. He served in France, first in the infantry and then in the Pay Corps after being wounded and when in hospital recognised as having Accountancy qualifications.

The only memento we have from his Army service is a brass serviette ring with the name "Arras" (it once had a crest, but this is now missing).

In May, 1922, my father died (cause pneumonia) leaving my mother in a precarious position financially as there was no widow's pension in those days.

Mother often spoke of my father. She said he always remained essentially very English in his ways, although he did not have a very noticeable accent. The Sunday dinner was always a traditional affair with father presiding as "carver" of the roast meat, and vegetables being served in tureens. Soup first, of course, and sweets to follow.

Mother's two brothers - Wilfred and Victor Everett ran a carrier's business from their adjacent homes in McDonald Street, Kalgoorlie. The large back yard held their horses, lorries and sulky (during the 1920's) and later their motor truck. Grandma Everett lived with us in Campbell Street during the last ten years of her life, when she was blind from glaucoma. Each Sunday afternoon one of the Uncles would drive the horse and sulky to our place and take out Grandma for a "jaunt' around the "Boulder Block" (mines territory).

Wilfred, who was a Boer War veteran, died when I was little, but Victor lived to a good age and was well looked after in later years by Aunt Edie (Wilfred's wife), who was a most hospitable lady and often had our whole family for the customary Sunday "tea" - cold meats and salads, fruit salad, jelly and icecream and all varieties of scones and cakes, set up on a large table on their side verandah.

Victor's wife was a grave disappointment, running off with another man and leaving her two daughters (Marjorie and Doris) to be brought up by Wilfred and Aunt Edie, who had no children. They owned a pianola and we had great sing-songs around this instrument. 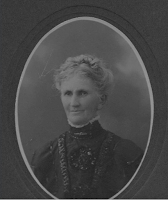 Grandpa Everett died in 1908 from Asthma, leaving Grandma to live on until 1936. She was a dear little lady (see photo right), whose "going out" outfit was a long black sateen dress, little black boots (she was born with a club foot) and a black "cloche" hat trimmed with black lace. She still retained some of her Scottish sayings (no accent, though) and insisted on calling Kathleen "Katherine", the former being too "Irish". She was a twin and two sets of twins that I know of have been born later in our family.

Grandma's uncommon name "Archina" was perpetuated only once. It was given by Auntie May to her older daughter (she is usually called" Archie" and I don't know whether she appreciated the honour).

While on the subject of names, I might mention why I was given the name "Mona". It is a common name on the Isle of Man (early English maps call it "Mona's Isle"). Castle Mona was the name given to the home built for the fourth Duke of Atholl, who was Lord of Mann before the title was given to the reigning English monarch in 1765. It is now the Castle Mona Hotel and is used as such. Ships belonging to the Isle of Man Steam Packet Company bear such names as "Mona I" and "Mona's Isle".

My father [whose family had moved to the Isle of man in the 1880s] wanted each daughter after Frances [who was named for his mother] christened Mona but mother would not consent until I, the fifth girl, appeared instead of the much-wanted son. Then Father registered me as Mona without consultation.

I have a little Isle of Man silver emblem showing the "Three legs of Man" with the name "Mona" underneath (as its symbol, the Isle of Man has a shield showing three legs sheathed in armour running clockwise and a Latin inscription meaning "whichever way you throw me I will stand").
In late 1939 (shortly after the start of World War II), I sat for the Commonwealth Typists' Examination and scored the second victory for the Eastwoods, again coming top of the State [Marjorie had also topped the State some years earlier]. The examination was a test in English, Arithmetic, Typewriting and Shorthand. 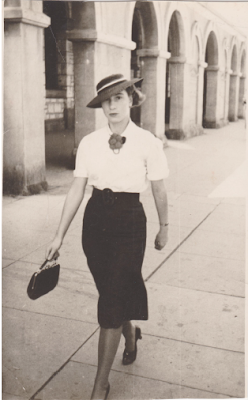 I was appointed to a Department in Fremantle and that was the start of the Eastwood move to Perth. Jean was offered a buying job with Chas. Moore & Co. in Hay Street, Perth, and mother, Jean and I moved to our newly built house in Perth. Mother's share of Grandma Eastwood's estate enabled her to pay cash for this (about £1,175, I think).

The old Kalgoorlie house was sold for a very low figure because prices were down during the war. I think mother was sad to cut her old links with Kalgoorlie after so many years. Living was very hard, with water and comforts scarce, yet building went on apace and Kalgoorlie-Boulder is still prospering after 100 years, even though gold prices fluctuate. Tourism, of course, is a boon to the Goldfields.

Mention of the "Arras" serviette ring reminded me of one of mother's stories about her Everett/Eastwood marriage. One of the wedding presents was an ornately embossed hallmark - silver serviette ring. Whether this came from my father or one of the English Eastwoods, I do not know. It bore the initials "L.E" and, when the presents were displayed, one of the guests was undiplomatic enough to quote the following couplet:

"Change the name and not the letter,
Change for worse and not for better."

Mother never revealed her thoughts on this.

Posted by Deborah Burrows at 19:07

Thanks for sharing so much of your family history with us. Great pictures. I visited Kalgoorlie about twenty years ago - my sister lived in Perth for a while and we spent six months travelling in & around Western Australia. It reminded me of that time. Though I expect it is much changed now!