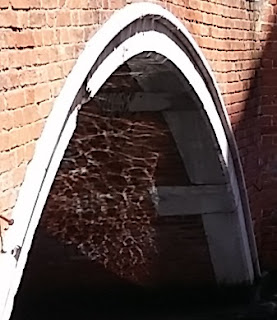 The protagonist of my forthcoming novel is called “Sorrowful Lily”, and her burdens are great: she’s an orphan with none of the secret sacred ties that bind all Venetians to one another in affection; she’s the self-doubting daughter of a madwoman; worse, she’s particular scapegoat of a cruel Sicilian badessa in the grim convent where she’s brought up.

However, Sorrowful Lily is coaxed into a rare moment of optimism and joy by a phenomenon that I think unique to Venice – the way illogical and unlikely light dances on the undersides of bridges, on high facades and on ceilings, places where these lacy kinetic illuminations don’t seem to have any business to be.

Lily’s experiences what some call “gibigiana” and others “sbarlusso” when she tries to run away from her latest captor, the woman who runs the mysterious hotel where she's been sent to work as a punishment for setting fire to the convent. Venice, meanwhile, has been glowering grey and sunless for months since someone stole the foot of the city’s beloved Saint Lucy.

To Lily’s horror, the Signorina turns out to be the sister of the very badessa she thought she’d left behind at the convent. Worse, Lily remembers that the last orphan sent to “The Hotel of What You Want” was never seen again.

In this extract from The Wishing Bones, Lily’s just crossed the hotel’s threshold for the first time ... 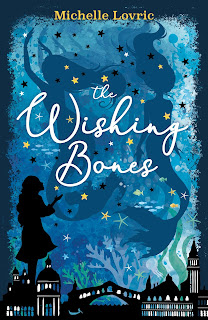 The door was open. I breathed the air of freedom and took a step towards it.

‘Aldo!’ shouted the Signorina. ‘Show her what happens to girls who try to escape!’

I fled. But my first turn led me into a blind alley that ended in a canal. At a safe distance from the water, I leaned panting against the bricks watching the ripples of the waves that were reflected like starbursts on the underside of the arch. We Venetians have a word for that watery, wavering light: sbarlusso.

Of course, with Saint Lucy’s foot gone, the light was sunless and today the sbarlusso winked sadly, like a widowed uncle.

‘Sbarlusso,’ I said aloud, still panting. That’s what my life would be like – free, scintillating, lively – without sisters from Sicily to insult, bend and beat me. I would find decent work. I would make some secret sacred ties of my own.

I felt the rumble of footsteps before I even heard them. Then my arms were pinioned behind my back and a sack thrown over my head. I smelled garlic, meat and anger through the coarse weave.

A man’s voice told me, ‘Thought you’d get away? Don’t make me laugh. I know all about you. You are the daughter of a madwoman. You are not destined to live free. Your wits are not up to it, girlie.’

This coarse high voice must belong to Aldo, I realised, the man the Signorina had summoned.

‘And if you try that again,’ he whispered, ‘I won’t bother bringing you back. I’ll drown you like a kitten in a bucket. Who’s going to miss you?’

And so Lily is dragged away and back to servitude in the hotel, where the exclusively English guests regularly fall into declines and disappear.

I won’t pretend that The Wishing Bones isn’t a very dark novel. And indeed my last post in this parish was about Venice in the physical and metaphorical night. But even the deepest darkness becomes monotonous without light – which is why I allow Lily a little of it.

Not far from me in Venice is a glass shop called “Gibigiana”. 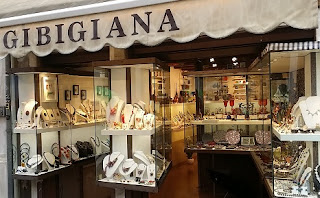 The owner told me this week that he’d named the shop after the phenomenon because of the light trapped inside the best of his delicate productions – like this teardrop of a bottle. 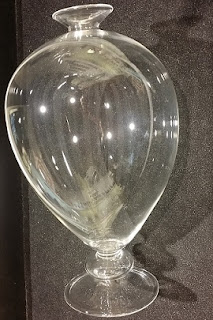 And it's true that the best Venetian glass does reflect what you see on the facades of buildings that breathe in the light of the water: 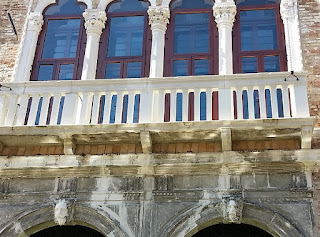 It was a luminous April this year. But I talked to Gibigiana's proprietor Stefano on a rare day of monsoon-like rain that had driven all the tourists off the streets. They sheltered disconsolately under awnings and in steaming cafes. The light was not dancing through Gibigiana's windows - but somehow, magically, it was still there in the mirrors and jewellery. 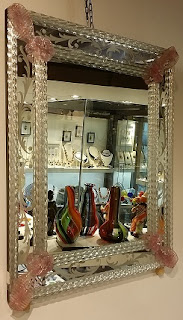 Stefano told me that 'Light is different in Venice'. He explained that's because water acts as a mirror, doubling the light and making mischief with it, playing, deceiving.

Meanwhile, he saw that day's kind of rainlight as a “fascino decadente” – a decadent charm, and I understood exactly what he meant.

No one can look at Venice's sbarlusso, in all its forms, without experiencing a strange effect on one's mood. It's a phenomenon of newly-coined light in old or ancient places: a light that's suddenly tarnished with memories.

So I guess sbarlusso really is the right kind of light for a dark kind of novel.

The Wishing Bones is published on July 25th . New web-pages have just gone up, using the wonderful night-time photography of David Winston to set the scene for this dark story.

One of the characters is a young Casanova. I shall be talking about him at the Casanova in Place symposium in Venice at the end of June.
Posted by michelle lovric at 00:30

I got to go to Venice a few years ago, I made my own bookings, I came by train, stayed with a family and shopped in a supermarket. But the place was magical! the light made even dull days sparkle, the rain was a joy and the back streets and the locals made the trip wonderful! <3 I look forward to reading this small slice of Venice and remember it fondly!