EMERGING FROM THE SHADOWS: My next project by Elizabeth Chadwick.

Once every three years it comes time to negotiate a new contract with my publisher. My stint with The History Girls has seen me through my Eleanor of Aquitaine trilogy, The Summer Queen, The Winter Crown and the Autumn Throne, followed by Templar Silks and the forthcoming The Irish Princess (September).

My new contract, freshly signed is for two novels still to be written, as yet untitled, and a third one cheekily slipped in, titled The Coming of the Wolf, set just after 1066. I wrote the latter some time ago. It's a prequel to my first published novel The Wild Hunt.  The Coming of the Wolf will have a blog to itself in the coming months, but it's not what I want to talk about today.

People often ask me how I choose who or what I am going to write about.

What tends to happen is that even while writing the previous book, I will be on the lookout for future projects.  Very often the research for a current project will turn up something that sparks my interest and with initial curiosity piqued, I will then delve a little deeper and find out if the subject is just a passing fancy or whether it has a longer shelf life.  Sometimes the subject matter will have been covered by another author, but it doesn't bother me. The deciding factor is me asking a prospective protagonist: 'What you can you tell me about yourself that is true to your life but that you have never told anyone before?' And if they want to enter into a contract with me, they sit down and tell me their stories.  It is definitely a two way process.  We both have to want to travel with each other.

Eleanor of Aquitaine was fascinating to research because from the in depth research I conducted,  she bore little resemblance to the woman portrayed in several of her popular modern biographies, and often bucked the trend of the image fostered in the mainstream.  However, I must have done something right because Michael Evans quoted my research in his work 'Inventing Eleanor' for Bloomsbury Academic and cited my research, commenting that I was a historical novelist who had managed to avoid the popular misconceptions about this great queen.

William Marshal's story 'The Greatest Knight was a worldwide bestseller for me and continues to be so; we are still travelling together 15 years later as I continue to study his life for my personal interest beyond the remit of historical fiction. Sometimes a character is for life rather than just the time it takes to write a book to order.


The first of my new unwritten novels, currently untitled, came about because I happened to pick up a biography of one of William Marshal's granddaughters.  Her name was Joanna de Munchensey and she married King Henry III's half-brother William de Valence. Should you potter along to the Dictionary of National biography, you will find a fairly long article written about her husband.  You can visit his beautiful tomb in Westminster Abbey too.

What you will not find in the DONB is an entry for Joanna de Valence.  Nor will you find her resting place because it has long been lost.  The former seems hugely unfair, but one of those instances where the woman has been written out of the history and subsumed by her husband's achievements, which were only possible because of her.  Her biographer, Linda Mitchell,  in Joan de Valence: the Life and Influence of a 13th Century Noblewoman comments that "Joan de Valence exerted an influence on the political, social and cultural landscapes of the thirteenth Century, one that has been neglected and perhaps even deliberately erased..." 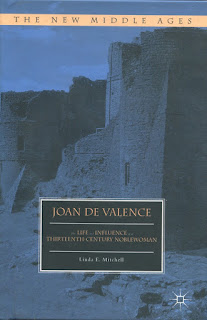 Mitchell's biography and her statements championing Joan immediately piqued my curiosity and led me to invite Joanna de Valence to the table - her husband too, who had his part to play and appears to have been a loving and lifelong partner from their marriage in their late teens through to their sixties. She was his 'Dear friend and companion' more than twenty years into their marriage and their last child was born around ten years after he wrote that endearment greeting to his wife.  Mitchell comments that the completely unfair character assassination of William de Valence by historians and chroniclers has led to his 'erasure as a viable historical character'  And William's erasure has led to an 'even more profound erasure of Joan in historical discourse.'

Rather like Mitchell, I was astonished at the dismissal of this lady from the records given her contribution and standing. We do have a few records from her household accounts in later life that paint a picture of a warm, busy, sociable and very capable lady who was legally and politically astute and refused to have the wool pulled over her eyes.  However, for most of her life, she is ascribed no input or value. Her contribution is either glossed over or given a negative spin.  Her husband is often dismissed as an arrogant foreign sponger (in spite of the majority of his household knights and servants being natives) and his loyalty to Henry III and Edward I is set at naught and shrugged off.  But there are always two sides to every story, and it's time for the coin to be flipped and another side shown to the light.
.
I relish  a challenge, especially if it involves an underdog or someone who has been done down by history. Last year, with Joanna on my mind, I visited the Welsh Marches with the intention of going to Goodrich Castle which was Joanna's favourite home in the years following the Barons' Wars of the 1260's and a place she built up during her time as lady of Goodrich.  We hired a holiday home for the duration of our stay, and it turned out, the owner of the holiday let was descended from Joanna and William de Valence via one of their daughters.  Yes, some things are meant to be!
.

how very interesting, I like the sound of Joanna, and will look forward to hearing/reading more.
Thank you

Asking the protagonist to share something of themselves which is true, but not told before, is beautiful. I try to listen to what I'm being told, but never thought of asking what they might want to share!

It's fun deciding what to write next I think - I always have few ideas on the go and eventually one of them turns into a book. Don't know how really! By a strange coincidence I visited Goodrich in the 1970s...

A great post! Looking forward to hearing more about Joanna! Congrats on the new contract.