Oh I'd love to do that... by Ruth Downie

A surprising number of people would love to be archaeologists, and if you want to know what it takes to be a real one, you’ll have go and find one and ask. But... if you want to be a sort of archaeological hanger-on - the kind of enthusiastic amateur who gets involved in the action but doesn’t have to fill in the Health and Safety forms - well here, based on my own experience, are a few skills you might like to cultivate.

Not all of archaeology is about digging holes, but a lot of it is, so let's be honest -

A fondness for mud can be useful.


In later years you will be able to look at photos of your own special patch of mud and wonder where it was and what was so interesting about it.
A limited sense of dignity.
Below is just a practice run at mapping what’s under the ground without disturbing it. But - those jeans have a metal zip and the boots have metal eyelets, which will interfere with the magnetometer readings. A more suitable outfit would be tracksuit trousers, wellies, and plastic specs held on with elastic. Now that’s what I call style.
The ability to watch out for marauding seagulls
No untrained volunteer is going to be let loose with the drone any time soon, but any fool can act as lookout for birds. So that’s what I did, while the expert took the photos for a 3D image of the hill.
Enough short-term memory to be able to follow instructions for the day
even if you’ve forgotten how to work the thing you’ve also forgotten the name of by next week.
The ability to get on with people
You and your companions may be working at close quarters in a remote location for many hours at a time. Resist the urge to sing, tell jokes or recount the plot of last night’s “Game of Thrones”.

The ability to hover
For those times when there is nowhere to put your feet without standing on the archaeology. No-one has ever captured this on camera.

A sense of wonder
Because archaeology can take you to some seriously beautiful places.

A sense of mustn’t-grumble.
These tyres were used to weigh down the plastic sheet protecting a Roman villa site over the winter. At the start of the next digging season they were always full of stagnant water and frogs, which made them all the more fun to remove. 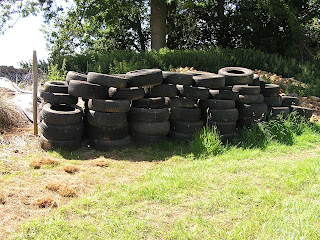 .
An appreciation of facilities with a fine view. 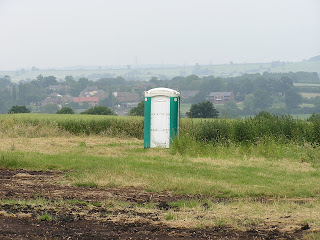 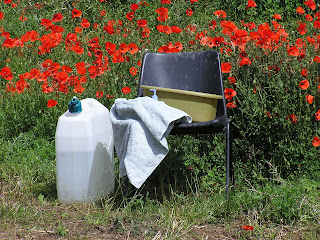 The ability to improvise 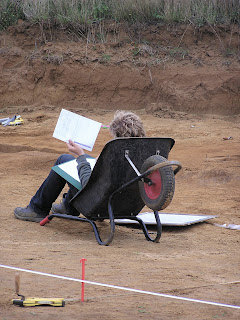 From this small chunk of pottery you have to conjure up the massive clay vessel that carried olive oil all the way from the south of Spain to a sheep farm in Roman Britain.
(Closely related to the Eye of Faith - for those times when something probably isn’t there but all the diggers convince themselves that they can see it emerging, which makes digging more interesting.) 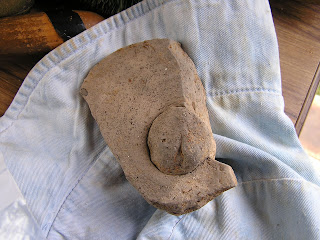 The willingness to do the same thing over and over again… Clay pipes are the cigarette papers of our ancestors. Our local society spent three seasons looking for a clay pipe kiln and failing to find it. After we'd dug up and washed thousands of broken stems the appearance of any scrap of pipe bowl with a pattern on it was a cause for excitement. 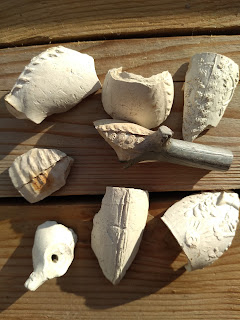 Looking on the bright side
Finding nothing proves that there was nothing there. Thus in your own small way, you have just extended the sum of human knowledge. So it wasn’t a complete waste of time after all, was it?

BUT sooner or later there will be a Magic Moment
Here’s one of them. Nobody had seen this in over 1700 years.

So, if I've tickled your fancy...
Here are one or two ways to get involved - if you have more suggestions please chip in with comments.


Futurelearn do some great online archaeology courses and if you look carefully, many are still free.

Get to know your local museum/local archaeological society. They will know people with trowels and places to wield them.

If you find something interesting - ask at the museum or, in England & Wales, look at the Portable Antiquities Scheme.

If you’ve got a metal detector - join a local detectorists’ club for advice on how and where to detect within the law.

The world-famous Roman site at Vindolanda relies heavily on volunteers, but book early if you want to dig - it's like getting tickets for Glastonbury. 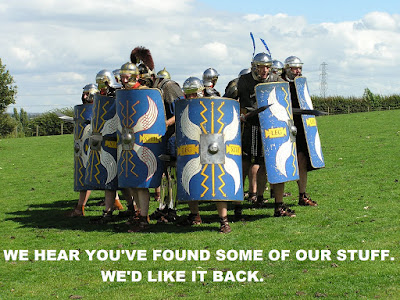 Ruth Downie is the author of the MEDICUS series of murder mysteries featuring Roman army medic Ruso and his British partner, Tilla.
www.ruthdownie.com