This post is going to be a bit different from my usual  kind. It's somewhat of a confession. It will be light on photographs because I haven't the energy to go fossicking among Wikipedia Commons to find pictures of the protagonists, so I'm going to assume you all know what each of my cast of fascinating characters looks like. They've been in  front of the nation for months now and you will each have your own image of every single one.

I'm going to confess two things. The first is my complete fascination with the coverage of the Brexit crisis. The second is my obsession with the necklaces of our Prime Minister, a subject I can't bring up much on Twitter for two reasons. The first reason: I have vowed to shut up on on Social Media about politics. Any political opinion gets you abused, trolled, and insulted, so I try to keep firmly silent.  And if I were to write about the PM's jewellery, I might be accused of being trivial, or writing about Mrs May as a woman. Heaven forfend! For the purposes of this piece, all you need to know is: I was and remain a Remainer. That's it. Anyone who thinks I'm going to yell and scream about Brexit has another think coming. The actual leaving of the European Union is not my concern here. Rather it's how I've reacted to total immersion in the coverage of the last few months in Parliament. I will say it here: I am hooked. A total Brexit news junkie. I watch everything I can: the news and Newsnight of course but also Politics Live every single day and it's on a series link on my telly so that I can catch up with the programme if I happen to be out when it airs at 12.15. on BBC2. For those of you who don't know it, it's 45 minutes of six people talking, under the guidance of the excellent Jo Coburn. She has a good mix of people on the show: men and women, Labour, Tory and every other party, young and old and you often get a visit (especially on Wednesdays, when the programme takes in Prime Minister's Questions) from the redoubtable and always impeccably-dressed Laura Kuenssberg. 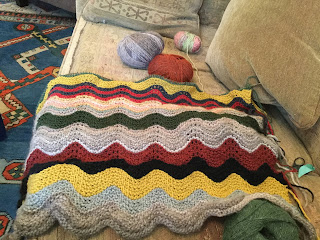 Here is my Brexit blanket. It's perfect tv knitting and it's growing apace.

Okay, Brexit. What I really love about it and especially in the last couple of  months since we didn't leave on March 29th, is the drama. And the dramatis personae. For a drama is what it really is. There's the wonderful setting of the House of Commons leaking already and in danger of falling down altogether if measures aren't taken, but meanwhile both picturesque and historic. Then there's a very huge and important Ticking Clock. Any writer will tell you that such a thing is an enormous help in making everything more tense and exciting. And you have a dream cast! What an array, what a veritable gallimaufry of people is ranged in front of us! There's something for every taste: Jacob Rees-Mogg, Ken Clarke, Michael Gove, Boris-who-doesn't-need-a-surname (which may become important in any General Election) Keir Starmer with his intriguing hairstyle, and of course the Leader of the Opposition about whom I will say nothing. In charge of the Government for good or ill is Theresa May, who came into office after the Referendum result produced another drama ( see Boris and Michael Gove, above.)

We also have another cast in Europe: Michel Barnier, Donald Tusk, Angela Merkel and Emmanuel Macron (who comes decked in Napoleonic trappings and has an Older Wife...the stuff of soap operas). They are fascinating in themselves. I like listening to Laura K and Katia Adler when Mrs May goes to Brussels or Strasbourg, because they paint a picture of our Prime Minister being..well, not exactly welcomed and you can understand why. We are, after all, trying to leave. (But in parentheses, I loved the video clip of Merkel and May exclaiming over an iPhone at the coincidence of both wearing a royal blue suit on the same day.)


Now look at our heroine: here's a 62 year old woman. She's diabetic. She has to get up every single day and put on decent clothes and an iconic necklace, and stand in front of more than 600 people who are constantly at her for not doing this, not doing that, not listening to them, listening too much to the others, especially the DUP under Arlene Foster. who seem not much given to gentle, emollient chat. Mrs May is not particularly liked. She's not clubbable. She doesn't have the gift of the gab. She's wooden in interviews. She's called the Maybot. The ERG group in her own Party would like to see her gone. They failed in a coup attempt...that was dramatic. I was glued to the sofa for all that, you may be sure. But her Weeble-like gift for getting up again when knocked down is amazing.

There are others who think they'd make a better fist of it if they were Leader...but not a single one of them wants their fingerprints on a Bad Deal and to be left holding the Brexit Baby. Also, very importantly, no one has a PLAN to put up against Mrs May's Deal. Not one single idea put forward has the solid support of Parliament behind it. And, like it or not, the UK voted to Leave. This is the background to every single drama: we voted to Leave. I was desperately sorry that we did and sincerely wish we hadn't, but I fail to see how overturning a democratic vote by another Referendum would be the answer....oops. Sorry. A bit of politics there. Back to Mrs May and her necklaces.

Here's another confession. I adore jewellery and can talk about it for hours with anyone interested. When Mrs May first took office, my immediate thought was: hurray! Something new to look at every day. And she's done me proud. Her necklaces are brilliant. I like some more than others. The metal chains and complicated silver affairs are terrific. Best of all, I love her green glass beads, which are I think, faceted glass. She has a similar ruby-looking one, and sometimes she wears gobstopper pearls. And a couple that look like those models of atoms: globes clustering together that you find in science labs. I'm keen on her Jackie Brazil flagstones number. Mrs May wears good bracelets too. There's one which bears an image of Frida Kahlo. Often her chain necklace has a matching bracelet...I could go on.

She's got the knack (rare) of knowing where a necklace should sit on your chest. Nothing dangles. Nothing chokes. Every piece falls in exactly the right place.
She has the advantage of height but also the tall woman's stoop, as if she's trying to disguise it.
Her shoes are legendary. She has good legs. Not every one of her outfits works, but she has a better strike rate than many other public figures. I did get a little tired of the famous pale blue coat....but I live in hope that the warmer weather will see the back of that. 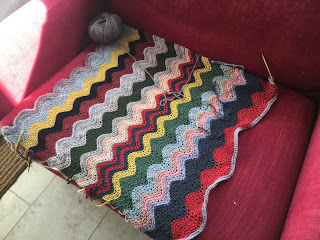 Look closely and you'll see my Brexit blanket has grown...but now we're in unknown territory. At the time of writing, we have an extension till October. But will we leave in time to avoid the dreaded European elections? Will a Tory-Labour agreement about something be reached? Will the group that's prevented us from leaving agree to get May's deal through Parliament? Will there be a vote of confidence? Will the Government fall? Will Theresa May survive for more than a month or two? She has shown remarkable stickability. See "no one else has a plan" above.


I'm writing this during the Parliamentary recess in April. Who knows what will have happened by the time this post goes live? May have to add a ps or maybe not. In any case, I'm longing for the break to be over so that the drama can begin again. This is a kind of interval and I want to be back on the sofa with Laura K, Katia A and Andrew Neil who does the best interviews of all and lets no one at all off any hook. I want the performances to resume in the Mother of Parliaments. The cast of characters is always full of surprises. There will be alarms and excursions. Social Media is helping meanwhile..but the Drama goes on and this particular one has that priceless thing: not a single person knows what's going to happen in the end...back to the sofa to see if there's a Final Twist! 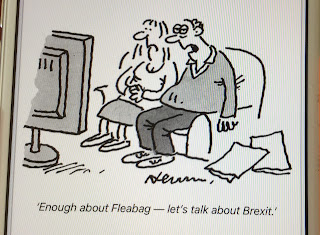 Thanks for making me laugh, Adele. I've just come back from Italy and i must say I loved being Bereaved of Brexit news for a few weeks.

Brexit seems to bring out the worst in folk, the pro's the anti's, and all convinced they and only they are right. Hard to have an opinion esp here in Scotland where it is layer with the referendum too. I think the best answer is not to comment :-( but now I will be looking out for the necklaces and shoes to enjoy :-) thank you, and your blanket looks amazing, will you keep going until Brexit happens or will it be finite?

Thank you so much, Adele! I enjoyed this enormously. And of course things have indeed got even more complex since you wrote it! How much longer is your blanket now? The pattern appears to be Feather and Fan, which is simple to do but looks complicated to the uninitiated (unlike Brexit, which is apparently the other way around.)

Thank you. Great fun. And the Brexit Blanket is also to be treasured not merely for warmth but for the story.

What a delightful post! It almost makes me wish I hadn't decided to utterly boycott the Brexit madness!

Wonderful! I too am a great fan of TM's necklaces...