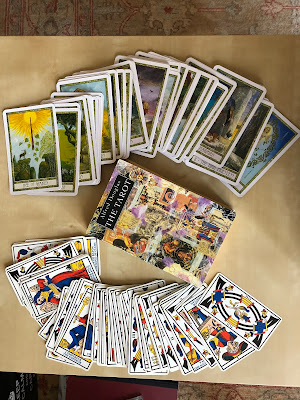 I own several different packs of Tarot cards. Over the years, I've used them for inspiration and divination. In various ways and guises, they've found their way into the books I've written. The name derives from the Italian tarocchi , a pack of playing cards used from the 15th Century for various card games, some of them still played today in various parts of Europe: Italy, France and Austria. Like common playing cards, the tarocchi pack is divided into suits: coins, clubs, cups, and swords, which equate with our more familiar diamonds, clubs, hearts and spades. It has the same numbered cards, from one to ten and ‘face’ cards: King, Queen, Knight and Jack or Knave. There is also a single separate card, the Fool, which equates with our Joker, and has no face value but can be played in different ways, depending on the game, and is therefore, in some ways, the most valuable card to have.

The tarot pack was not just used for playing games, it was also used for cartomancy, the art of fortune telling, with the different cards and suits attributed with different significances and meanings. The esoteric tarot developed from this. One of the earliest packs used in this way was the Tarot of Marseilles. The design has changed very little. This is a 1751 pack and the pack I use today. 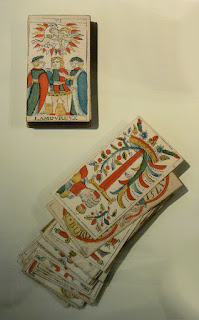 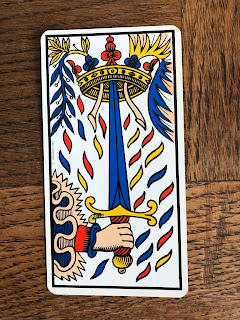 The biggest difference between a tarocchi pack, a pack of ordinary playing cards and an esoteric pack is the Major Arcana (the greater secrets). The Minor Arcana (the lesser secrets) is almost the same as in a conventional pack of cards. Fifty six cards, divided into four suits, ten numbered cards, with the addition of a Knight into the face card suits. The Major Arcana is different. It contains 22 cards without suits: The Magician, The High Priestess, The Empress, The Emperor, The Heirophant (or Pope), The Lovers, The Chariot, Strength, The Hermit, Wheel of Fortune, Justice, The Hanged Man, Death, Temperance, The Devil, The Tower, The Star, The Moon, The Sun, Judgement, The World, and The Fool. The cards are numbered from I to XXI in Roman numerals with the Fool, like the Joker in a conventional pack of cards, having no number. 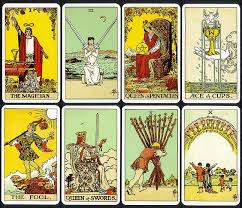 For many people, this is where the fascination, mystery - even fear – lies. In a reading, cards from the Minor Arcana are just as significant to the querent but it is cards from the Major Arcana that appear to hold the greater meaning. The central images appear simple but there is a strangeness about them. The backgrounds and the details within them are heavy with symbolism and invite you to look deeper in. The cards are not just for divination. They can be used for meditation, creative inspiration or as arresting images in their own right.

My favourite card is The Fool, titled Le Mat in the Tarot de Marseilles. In more modern packs he is shown as a young man walking, seemingly unaware, towards the brink of a precipice. He is accompanied by a small dog and holds a rose in one hand and carries a bundle over his shoulder. He is accompanied by a butterfly and above him, the sun shines in the sky. The Fool belongs to the tradition of the Wise Fool, the Sacred Fool. The rose he carries symbolises innocence and hope. The dog at his side, sometimes tearing at his clothing, symbolises old ways of thought seeking to hold him back. The pure light of the sun shines down on him and his bundle contains an accumulated store of wisdom and knowledge. He is led on by a butterfly to new adventures and higher attainment. That he is stepping towards a precipice, doesn’t seem to matter.  He knows he will be just fine.